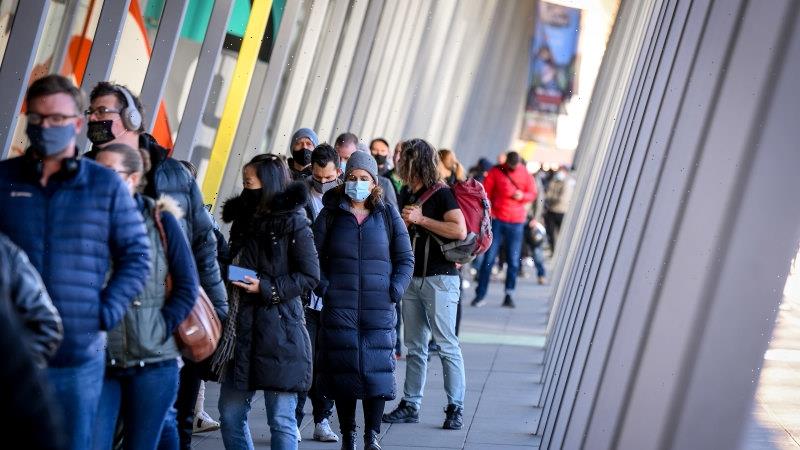 A legal challenge against the government’s COVID-19 vaccine mandate brought by a Victorian teacher has been listed to go to trial this month.

Casual relief teacher Belinda Cetnar and her husband Jack Cetnar, a horticulturalist at a school in Melbourne’s south-east, issued a lawsuit against the government saying they were adversely affected by the requirement that school and childcare staff must receive a vaccine if they want to work. 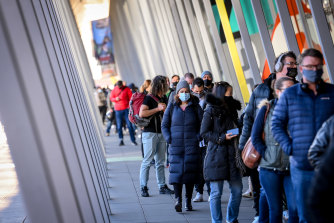 The queue for COVID-19 vaccination at the Melbourne Convention and Exhibition Centre.Credit:Eddie Jim

The Cetnars initially asked for an urgent order to suspend the mandate, but in the Supreme Court on Tuesday morning, Justice Melinda Richards said the urgent application was overtaken by the fact directions had already been made.

Justice Richards instead listed the case for trial from October 25.

Asked by Justice Richards whether they would like legal representation in the case, Ms Cetnar, who has also worked as a law clerk, said she was seeking a lawyer to represent them.

Justice Richards said an early trial to decide the case was appropriate.

“As you’ve identified in your affidavit, the directions will have consequences for both of you,” Justice Richards told the Cetnars.

In their statement of claim, the Cetnars say they would lose their employment because of the mandate.

The court heard on Tuesday expert evidence was expected to be called on both sides.

The Victorian Equal Opportunity and Human Rights Commission was still considering whether it wished to intervene under the state’s Charter of Human Rights and Responsibilities Act, the court heard. 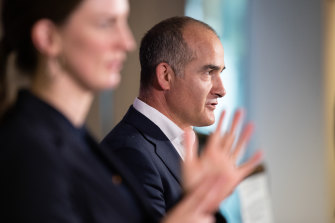 Sarala Fitzgerald, the lawyer acting for the government and health officials who are the respondents to the lawsuit, told the online hearing it was an “incredibly pressured period” for health officials trying to allow Victorians to have 30 people in their homes for Christmas.

“There is legally a lot on all of these health experts’ plates, and I would just ask the court (to remember) that all of the people’s time I will be demanding over the next few weeks are also trying to do something incredibly important,” the barrister said.

But Justice Richards said those officials would already have evidence at hand to justify their decision to enforce the vaccine mandate.

“If they were starting from scratch then you would have a very big problem,” Justice Richards said.

The Cetnars claim compulsory vaccination was not legally or ethically justified, undermined the rule of law and was inconsistent with their human rights.

They list various human rights provisions and laws they say the policy contravenes, including the Constitution, the Biosecurity Act, the Fair Work Act and the Nuremberg Code.

Justice Richards told the Cetnars an experienced lawyer would help refine their argument.

Ms Cetnar told the court she was also seeking to establish whether the mandate was considered by the parliamentary scrutiny committee before the directions were made under the Public Health and Wellbeing Act.

Justice Richards said directions under the Act were made by the chief health officer, with “very broad application in the exercise of his emergency power”.

The case was adjourned until October 25.

On Tuesday morning Premier Daniel Andrews took a swipe at teachers who refused to get vaccinated against COVID-19, saying, “for heaven’s sake, our kids can’t get vaccinated”.

“Why [anyone would] want to be in a school community contributing to the spread of this virus makes no sense to me,” he added.

Mr Andrews said a survey completed by the Department of Education showed almost 99 per cent of school staff in the state have had at least one dose of a vaccine, which was the “good news”.

“Everybody [working in schools] who can, needs to be [vaccinated] to keep [children] safe. That’s a pretty simple thing, for me anyway,” the Premier said.

Crest Education executive principal Brendan Kelly said on Monday the legal action was taken in a private capacity and was not associated with the school.

“The college has encouraged staff to be vaccinated and will be complying with all government requirements and public health directions,” Mr Kelly said.

The Victorian government announced almost a fortnight ago that vaccines would be compulsory for all staff at schools and early childhood centres, starting with first doses by October 18, and Mr Andrews last week widened the mandate to all authorised workers.

“This protects staff, it protects students, it protects our children’s families,” Deputy Premier James Merlino said when the mandate was announced on September 22.

There have been legal challenges against similar mandate in other jurisdictions. In NSW, a legal challenge against the mandate came from multiple plaintiffs, including an aged care worker, paramedic, high school special education teacher and a construction worker.