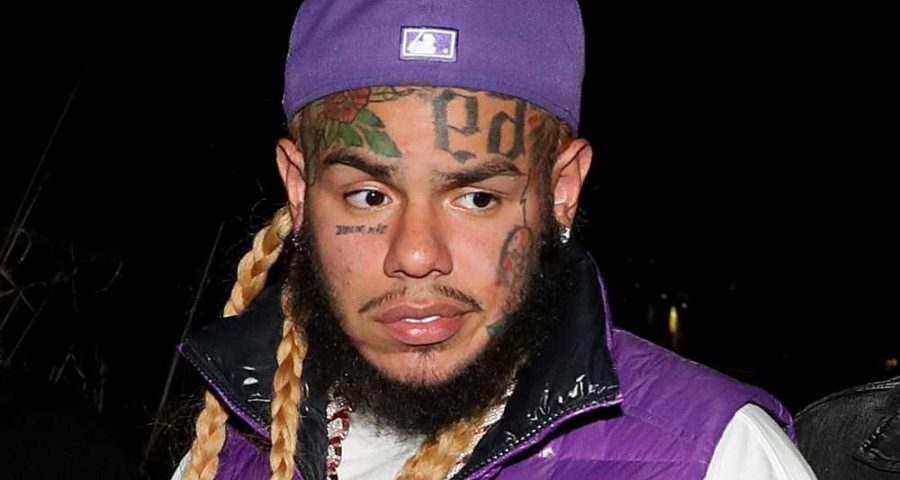 Five members of rapper Tekashi 6ix9ine‘s entourage, including a retired NYPD cop, have been indicted for allegedly chasing down a motorist after he shot video of the troubled artist, Manhattan prosecutors said Monday.

Daniel Laperuta, 44, a former NYPD detective, is charged with robbery, criminal impersonation and falsely reporting an incident in the August incident, which began when the victim shot cellphone video of the rapper after he and his girlfriend spotted him in Harlem.

The security team for the rapper-turned-snitch then hopped in their SUVs and chased the 34-year-old victim for 20 blocks — with emergency lights flashing and police sirens blaring.

At one point, Laperuta allegedly stopped and told a cop that the man had threatened them with a gun — a claim he allegedly made again later at the 28th Precinct stationhouse.

“A celebrity entourage is not a police department, and Manhattan is not the Wild West,” Manhattan DA Cyrus Vance Jr. said in a statement.

“As alleged, these highly-compensated vigilantes caravanned through the streets of Harlem with sirens flashing in order to track a man down and steal and break his phone,” Vance said. “Along the way, a retired NYPD detective tried to cover up their conduct by lying to his former colleagues.”

Tekashi, 25, whose real name is Daniel Hernandez, has been camera shy since being released from prison last year after testifying against the Nine Tray Gangsters, a street gang with which he had been affiliated.

In the August case, prosecutors said Laperuta and four other members of the entourage — Sammy Sprouse, Christian Cortez, Edgardo Cortez and Kristian Fuhse — took part in the chase to grab the victim’s phone.

The four are charged with first- and second-degree robbery and criminal impersonation.

Prosecutors said when they cornered the victim, Sprouse pulled him out of the car and Fuhse stomped the man’s phone — with the suspects leaving when cops arrived.

Laperuta was the first of the crew to be arraigned in Manhattan Supreme Court, where he pleaded not guilty and bail was set at $25,000 cash or $75,000 bond.

“Well, I think there may have been an assault as part of what that individual did which is what aggravated the response,” Laperuta’s lawyer, Todd Cushner, said Monday. “He was going to assault Tekashi or he was in the process of assaulting Tekashi.”

Asked if Laperuta was coerced by the rapper to chase the victim for the phone, Cusher said, “He wasn’t coerced into anything.”

The four other indicted suspects are awaiting arraignment.