A TEXAS cop was filmed pinning down and handcuffing a black teenager as she vomited and screamed “I can’t breathe”.

Nekia Trigg, 18, had reportedly run in front of cars in Forney, near Dallas, to take her own life when she was found by the officer. 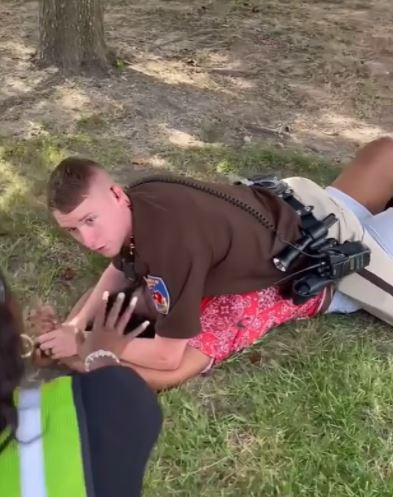 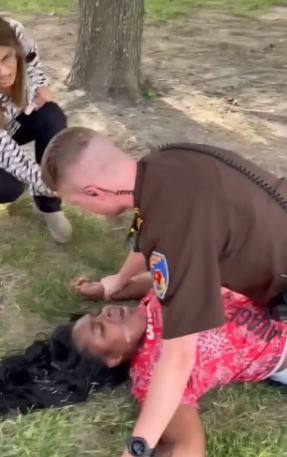 Footage shows the Texas sheriff’s deputy Conner Martin, who is white, lying on top of the teen and taking her mom to the ground before arresting her.

In the clip, Trigg’s mom Antanique Ray can be heard pleading with the officer to let her daughter go while she tries to calm her down.

It came after multiple eyewitnesses called 911 to say a young woman was walking in the middle of the street and attempting to throw herself in front of cars. Nekia’s family has denied that she was suicidal.

Body-worn camera footage shows the cop arriving at the scene to find Nekia crying and he asks her why she is upset.

The officer then holds her by the arm and demands that she stay still when she refuses to engage with him.

A tearful Nekia says: “Why are you hurting me? I don’t want you to hurt me.”

When she eventually pulls way, Martin pins her to the ground and she is heard yelling “I can’t breathe”.

Nekia’s mom Antanique arrived at the scene and attempted to intervene as deputies led the handcuffed teen to a police vehicle.

The sheriff’s office claim that Antanique “struck Martin” – who then took her to the ground and arrested her.

In a press release, the Kaufman County Sheriff's Office said that Deputy Conner Martin was using an approved control technique to detain Antanique after responding to a 911 call that she was suicidal.

Officials said the technique does not impede breathing or cause injury.

Ray was charged with assault on a public servant and interference with public duties in addition to two outstanding warrants, cops said in a statement.

Trigg was taken to a mental health facility for evaluation.

Deputy Conner Martin has been placed on administrative leave pending an internal investigation.