The Thai monarchy has celebrated the Queen mother’s 88th birthday as mass protests criticizing the playboy king continue to escalate.

King Maha Vajiralongkorn – known as Rama X – was pictured clutching Queen Mother Sirikit’s hand during a ceremony, as candlelit celebrations for the national holiday were held across the country.

Queen Mother Sirikit was dressed in a floral outfit complete with a pearl necklace while she posed for photos with her son and his wife, Queen Suthida.

But this year’s celebrations come as protesters risk arrest and 15 years in prison by voicing rare public criticism of the country’s normally unassailable monarchy. 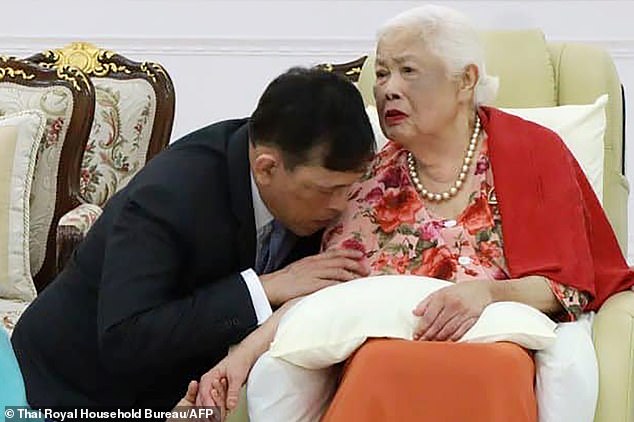 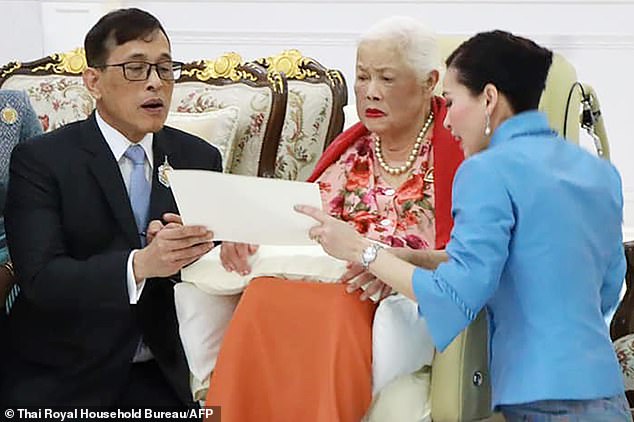 King Maha Vajiralongkorn was photographed talking to Queen Mother Sirikit alongside his wife, Queen Suthida, during a ceremony

Around 4,000 protesters listened in Bangkok this week as organisers read out a list of demands for the royal family, including reform of the ‘lese majeste’ law which protects the King from criticism.

Activists also called for frank discussion about the super-rich King Maha Vajiralongkorn, who has taken personal control of royal assets and has spent much of his time in Germany.

Protesters have previously made veiled references to the King, asking about the weather in Germany and holding up pictures of Harry Potter villain Lord Voldemort, also known as He Who Must Not Be Named.

But the latest protests have featured more direct criticism – prompting a rebuke from prime minister Prayuth Chan-o-cha who said the demonstrators had gone too far.

Buddhipongse Punnakanta, the country’s digital economy minister, has allegedly ordered authorities to identify ‘inappropriate’ posts across Facebook, Twitter and Youtube that may be in breach of the Computer Crimes Act. 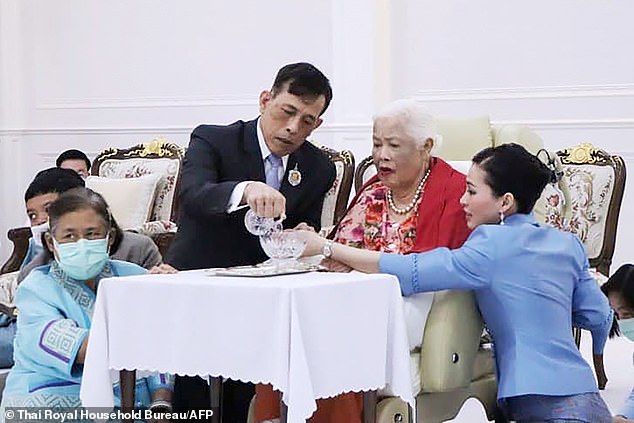 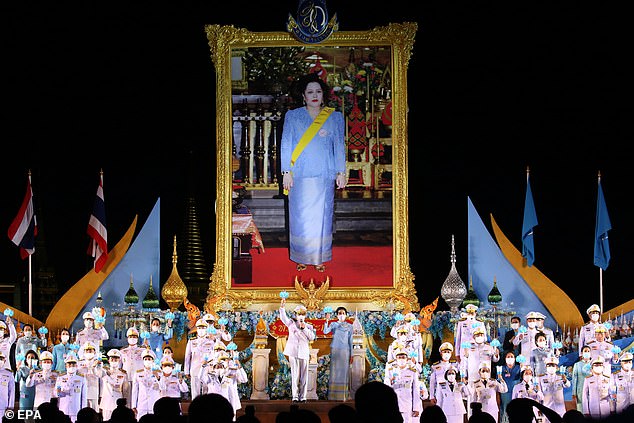 Thai Prime Minister Prayut Chan-o-cha (centre left) next his wife Naraporn (centre right) and officials light the candle in front of a large picture of Thai Queen Sirikit (centre) during a celebration ceremony of the Thai Queen Sirikit’s 88th birthday at Sanam Luang in Bangkok, Thailand 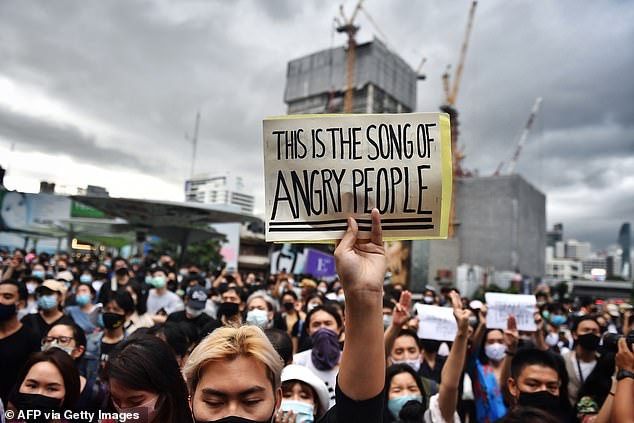 Protesters call for the dissolution of the military government of Thailand’s Prime Minister Prayut Chan-O-Cha and the release of activists Anon Numpa and Panupong Jadnok, who had been arrested on various charges the day before, during a flash mob in Bangkok 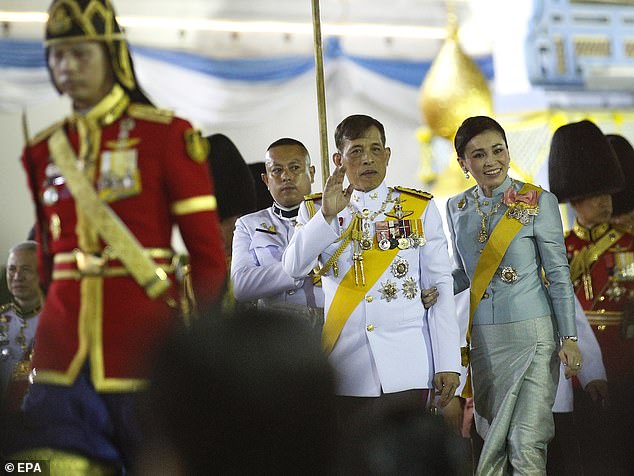 Thai protesters are risking arrest and 15 years in prison by voicing rare public criticism of the country’s normally unassailable monarchy. King Maha Vajiralongkorn  is pictured with Queen Suthida at a ceremony to celebrate the birthday of Thai Queen Sirikit, the Queen Mother, near the Grand Palace in Bangkok 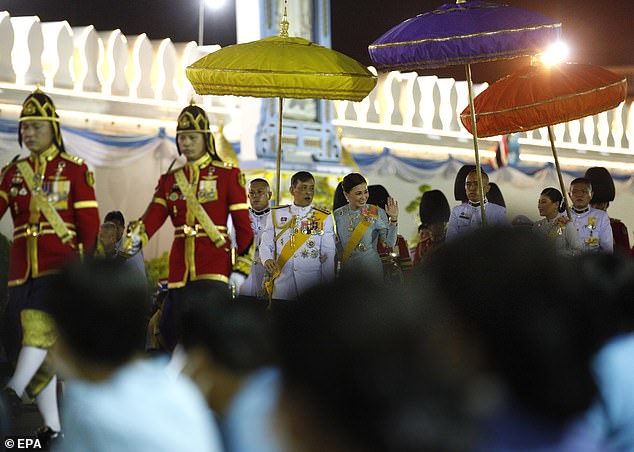 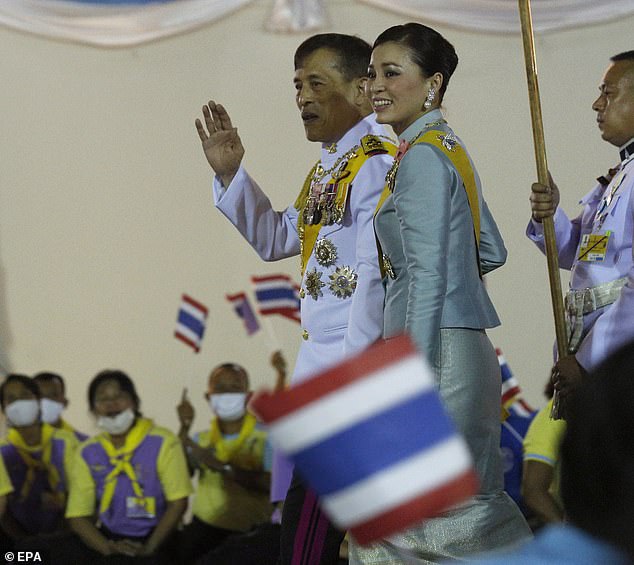 Palace officials declined to comment on the student protests or on any criticism of the monarchy. The King is pictured with his wife 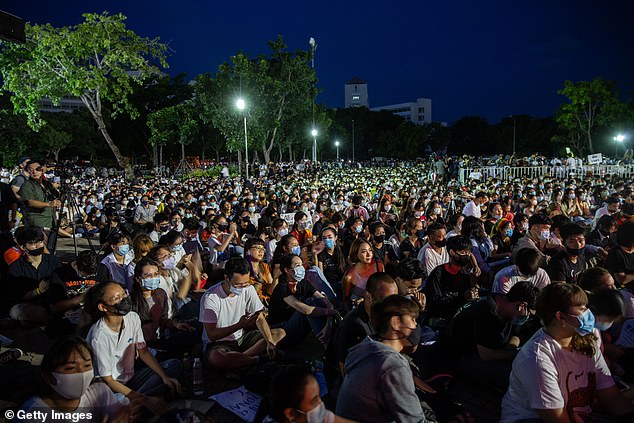 Protesters attend an anti-government rally at Thammasat University in Thailand on Monday night, where some demonstrators made demands to reform the monarchy 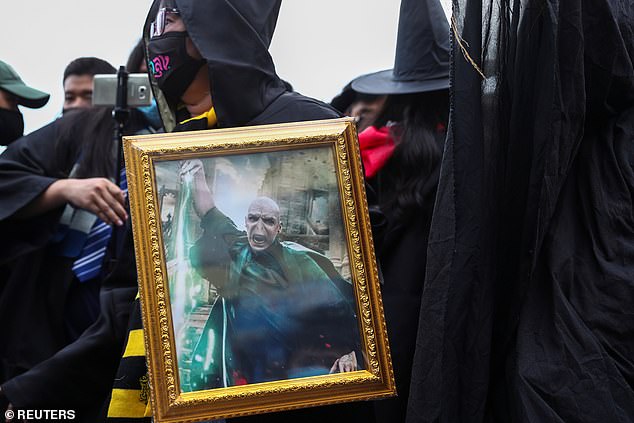 A pro-democracy protester dressed as a wizard holds up a picture of Lord Voldemort, the Harry Potter villain also known as He Who Must Not Be Named, at a protest last week 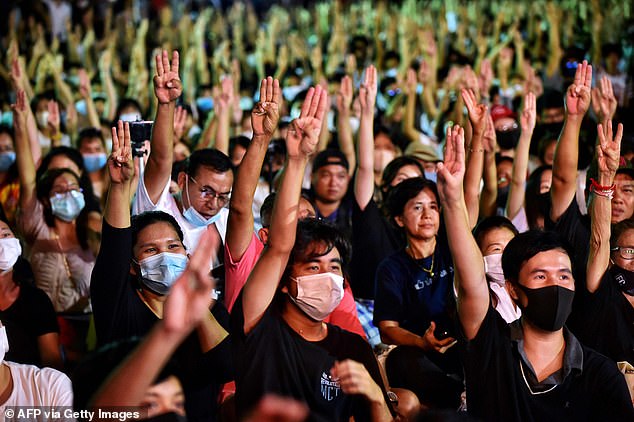 Protesters salute during a pro-democracy rally at Thammasat University in Pathum Thani, north of Bangkok on August 10

Thailand’s royal defamation law is among the toughest in the world, setting jail terms of three to 15 years for anyone who ‘defames, insults or threatens’ the King, Queen, heir apparent or regent.

The law is written in Section 112 of the country’s Penal Code and is widely known as the ‘lese majeste’ law, meaning ‘to do wrong to majesty’ in French.

The law against royal insults has been present in Thai criminal codes since early 1900s, when Thailand was known as Siam, and has been strengthened over the years by successive military rulers.

The prison term was raised to 15 years after 1976 student protests at Thammasat University were crushed.

The King is described in Thailand’s constitution as ‘enthroned in a position of revered worship’. Thai royalist traditionalists see the monarchy as a sacred institution.

Past convictions have included of a Swiss man jailed for 10 years for defacing pictures of the King, and a French businessman arrested for insulting the monarchy during a Thai Airways flight from London with two Thai royals on board.

However, there were only occasional prosecutions before 2014, when current Prime Minister Prayuth Chan-o-cha took power in a coup, according to Thai Lawyers for Human Rights.

Many of those convicted at the time were pardoned by the current king’s late father, King Bhumibol Adulyadej, who was widely revered during a 70-year reign until his death in 2016.

But between the 2014 coup and early 2018, at least 98 lese majeste charges were filed, according to a legal database by Thai watchdog iLaw.

Queen Mother Sirikit was born in Bangkok in 1932 and spent her early years between Thailand, England, Denmark and France.

She married King Rama’s father, known as Rama IX, in 1950, and the pair remained together until his death in 2016.

Queen Sirikit acted as regent when he undertook the tradition period as a Buddhist monk in 1956.

She was hailed for her duties and officially named the Regent of Thailand  the second Siamese queen regent in Thai history.

Famed for her glamorous appearance and flamboyant wardrobe, in recent years she has kept out of the public eye following a stroke in 2012.

Her birthday celebrations this year, though, have been overshadowed this year by widespread demonstrations.

Thousands of protesters chanted ‘long live democracy’ during a protest on a Bangkok university campus on Monday night.

Protesters from a student pro-democracy group made a 10-point call for monarchy reform while others called for the PM’s resignation.

The students’ demands included the reversal of a 2019 order that transferred two army units to the King’s personal command, and a 2017 law that gave him full control of the crown’s extensive property holdings.

Estimates of Vajiralongkorn’s personal wealth start at $30billion and he has spent much of his time in Europe, including during the coronavirus lockdown.

Reports in Germany earlier this year claimed the King was staying at a four-star hotel with a ‘harem’ of women who were assigned military titles.

Palace officials declined to comment on the student protests or on any criticism of the monarchy.

Prayuth, a former chief of the armed forces, told reporters he had watched the protests and was very concerned.

‘There are a lot of people in trouble waiting for their problems to get fixed, not just the young people. So is doing all of this appropriate?’

‘It really went too far,’ Prayuth said, without directly commenting on the demands on for royal reform.

Monday’s protest prompted a public statement by Thammasat University apologising for the event.

It said that while the university supported free expression, it did not condone ‘some references on the monarchy that impact people’s feelings’.

Students have previously staged Harry Potter-themed protests and mentioned He Who Must Not Be Named in a veiled reference to the King. 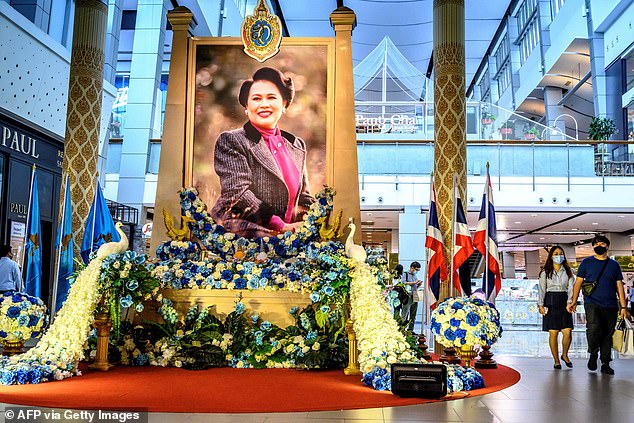 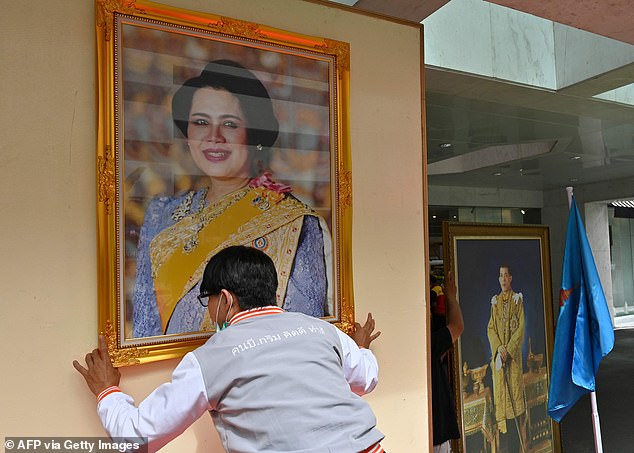 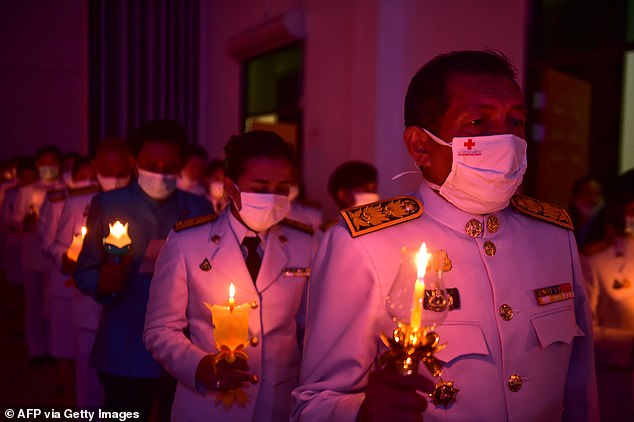 ‘No other democratic countries allow the king to have this much power over the military,’ he told about 200 protesters, with police standing by as he spoke.

‘This increases the risk that a monarchy in a democracy could become an absolute monarchy.’

Anon was not arrested under the lese majeste law, but was detained and charged with sedition and breaking coronavirus rules by taking part in the protest.

However, he was released on bail and took part in another pro-democracy protest at the weekend. 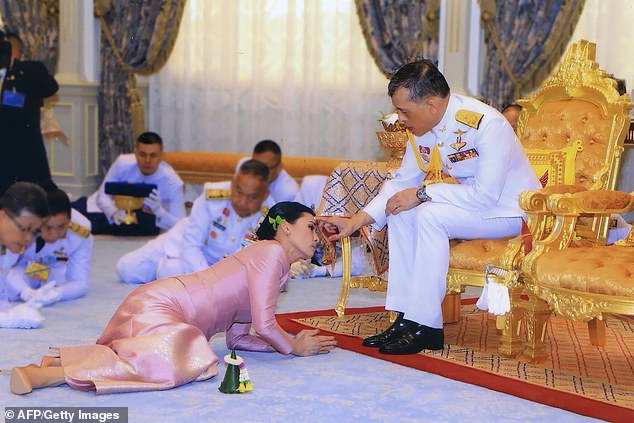 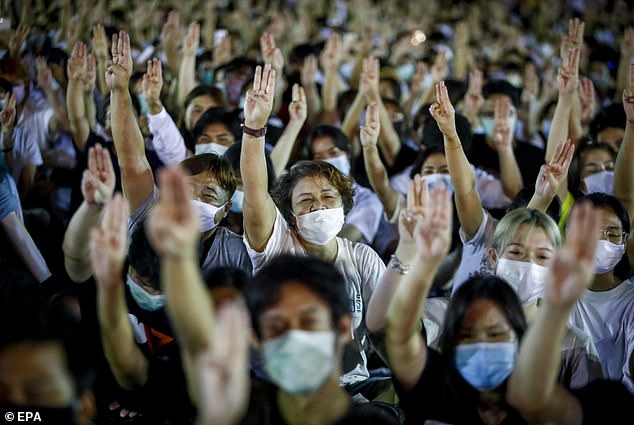 Approximately 3,000 anti-government protesters attended a rally in Bangkok on Monday night, the latest in a string of daily protests started by students in late July

Some protesters have worn face masks emblazoned with messages calling for the end of Section 112, the part of the Thai penal code which protects the monarchy from criticism.

While the country has been roiled by decades of political turmoil, the constitution says the monarchy must be held ‘in a position of revered worship.’

Any form of challenge to the monarchy was extremely rare under Vajiralongkorn’s father, King Bhumibol Adulyadej, who died in 2016 after 70 years on the throne.

The monarchy is also backed by the arch-royalist military, which has staged more than a dozen coups since the end of absolutism in 1932.

Protesters are also calling for a rewrite of the constitution and the dissolution of parliament.

‘We have no real leaders or organisers – people just come out by themselves.’

The coronavirus pandemic sent Thailand’s economy into freefall, focusing already simmering discontent against the government’s handling of the crisis. 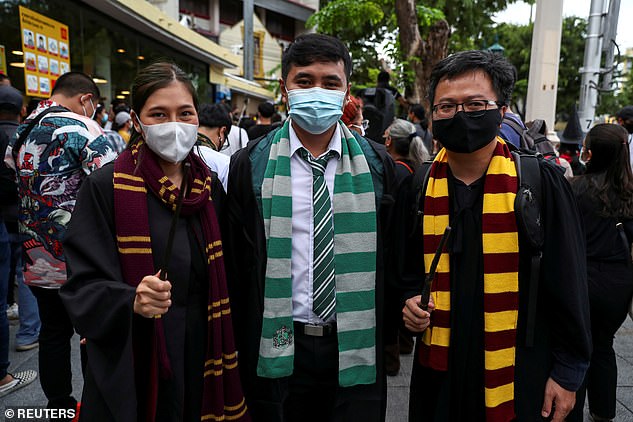 Many protesters support the opposition Future Forward Party, whose leaders were banned in February from politics for a decade over electoral breaches.

FFP’s mainly young supporters saw this as more evidence that the system was stacked against them.

Royalists have held counter-rallies, though with smaller numbers.

Even though King Vajiralongkorn spends much of his time in Germany, his image is pervasive in Thailan, where gold-framed royal portraits look down on city streets.

Cinemas play a royal anthem at which audiences are traditionally expected to stand, and conservatives say the monarchy is a guarantee of stability.

Some analysts say the military uses its close association with the monarchy to justify its prominent role in Thai politics.

Meanwhile, the king has strengthened his constitutional powers since he took the throne in 2016.

So far, only a handful of the dozens of student protest groups have openly criticised the monarchy, but they are united in demanding change to Thai politics.