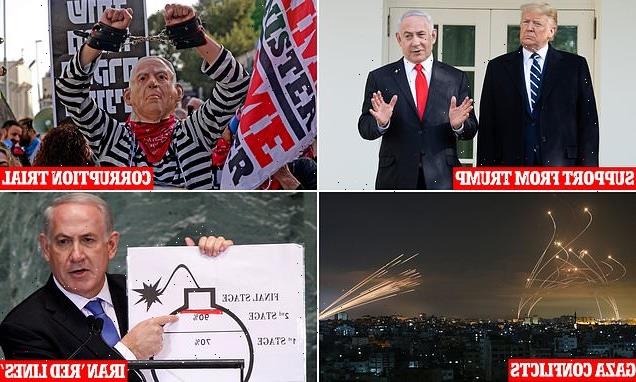 The end of an era: From Trump to corruption probes, how Netanyahu has dominated Israel’s politics like no other leader

Israel’s longest serving prime minister Benjamin Netanyahu was ousted from power on Sunday after dominating the country’s politics for more than 25 years.

Netanyahu was replaced by Naftali Bennett and Yair Lapid who took the reins after forming a coalition government with six other parties, including Mansour Abbas’s Islamic conservative Raam party.

During his reign, the Israeli prime minister oversaw the unveiling of the Deal of the Century; signed four normalisation deals with Arab states; and presided over three conflicts with the Gaza Strip.

He also railed against the Iranian nuclear deal, and became the first sitting Israeli president to be indicted. Benjamin Netanyahu served as the 9th Prime Minister of Israel between 1996 and 1999, he returned to the role in 2009 (pictured attending a Likud Party meeting at the Knesset in March 2009)

In November 2012, Netanyahu oversaw his first operation in Gaza – Operation Pillar of Defence.

The conflict started when after rocket fire from Gaza prompted Israel to strike back, killing Hamas’ military chief in an air attack and carrying out hundreds of assaults on militants’ underground rocket launchers and weapons stores.

An Egyptian-brokered truce was eventually agreed on November 21, ending the war.

The war left 2,251 dead on the Palestinian side, mostly civilians, and 74 on the Israeli side, mostly soldiers.  A ceasefire was agreed on August 26 and both sides claimed victory. 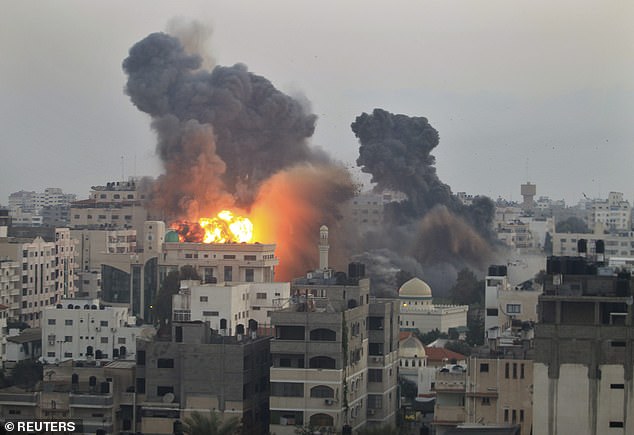 Smoke from explosions are seen over Gaza City following Israeli strikes on November 19, 2012, during Operation Pillar of Defence

Following the conflict, Netanyahu vowed a ‘very strong action if fire is resumed’, warning Hamas not to restart the war.

He also said he was no longer willing to renew peace talks with Abbas, saying the Palestinian leader would have to first distance himself from Hamas militants.

‘He has to choose,’ Netanyahu told Israeli Channel Two in an interview at the time. ‘It’s either yes to Hamas or no to Hamas.’

Mass protests then erupted in Gaza in March 2018. Demonstrators demanded the right to return to homes in Israel that Palestinians fled or were expelled from after the creation of the Jewish state in 1948.

The protests sparked a surge in violence on the border where Palestinians gathered every Friday. From March 2018 to December 2019, at least 352 Palestinians were killed by Israeli fire. Eight Israelis also died in related incidents.

Protests intensified in May 2018 after the new US embassy opened in Jerusalem following Donald Trump’s announcement that it would move from Tel Aviv. 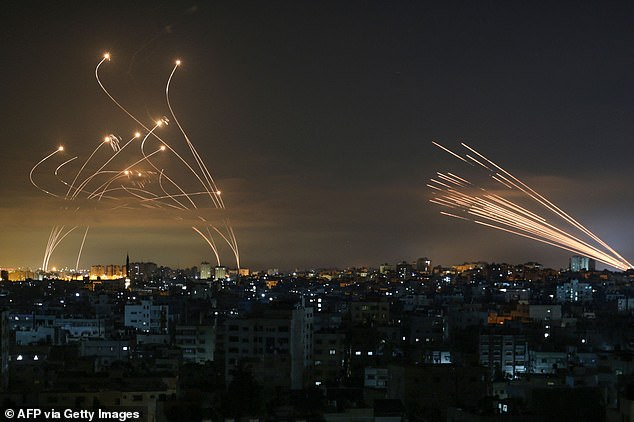 Rockets seen in the night sky fired towards Israel from Beit Lahia in the northern Gaza Strip on May 14, 2021

On May 10, 2021, the fourth conflict of Netanyahu’s premiership broke out following days of unrest in east Jerusalem.

Hamas issued Israel an ultimatum to withdraw soldiers from the Temple Mount complex in Jerusalem on May 10.  When the ultimatum expired without response, Hamas launched several rockets towards Israel, sparking an air offensive by the IDF.

At least 256 Palestinians, including 66 children, and 13 Israelis were killed during the 11-day conflict.

Netanyahu later claimed victory in the  conflict and said Israel’s bombing campaign had killed ‘more than 200 terrorists’ in Gaza.

He promised a ‘very powerful’ reaction if Hamas breached the truce which ended 11 days of bloodshed. He said: ‘If Hamas breaks the calm and attacks Israel, our response will be very powerful’.

The right-wing Likud party chief became prime minister for a second time in March 2009, after a first stint between 1996 and 1999.

He formed a coalition firmly anchored in the right, with ultra-nationalist Avigdor Lieberman as foreign minister.

A snap poll in January 2013 returned him to the premiership, this time in a coalition with hardliners keen to build settlements on Palestinian land seized during the 1967 Six-Day War.

He returned again to government after winning a confidence vote in parliament in May 2015.

Two years later, Netanyahu oversaw the construction of the first new government-sanctioned settlement in the occupied Palestinian territories since 1991, in defiance of international opinion.

Netanyahu was tasked with forming a government but was unable to secure a majority and instead decided to call another election on September, which returned the same results.

Neither managed to form a coalition, propelling the country into a third poll – the third election in less than a year. 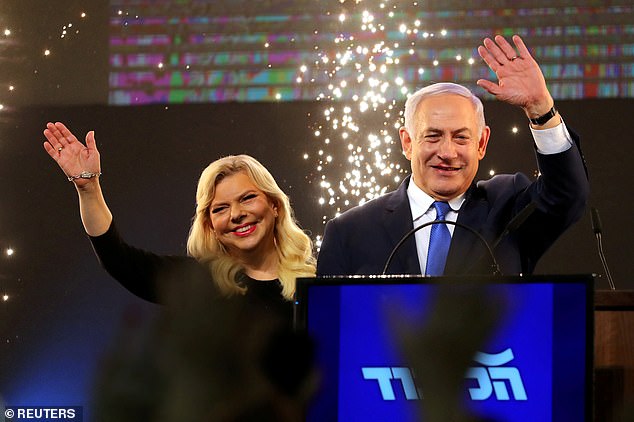 Likud won 35 of the 120 parliamentary seats in the April 2019 general election (pictured, Benjamin Netanyahu and his wife Sara celebrate after the vote)

An election in March 2020 returned a stalemate, forcing Gantz and Netanyahu to work together. On April 20, the pair unveiled a three-year unity government.

The deal allowed Netanyahu to stay in office for 18 months while Gantz, a former army chief, headed the defence ministry.

Under the agreement, Gantz would then take over as premier for another 18 months before a new round of elections. But, the agreement only held for a few months.

Likud came first in new elections on March 23, 2021, but Netanyahu was not able to form a government within the month-long deadline.

On May 5, centrist opposition leader Yair Lapid was tasked with forming a government, gathering support from nationalist hardliner Naftali Bennett – an arrangement Netanyahu warned would be ‘a danger for the security of Israel’.

Indicted on charges of corruption, bribery, fraud, and breach of trust

In November 21, 2019, Netanyahu was indicted by Attorney General Avichai Mandelblit on charges of corruption, bribery, fraud, and breach of trust in three separate cases.

Opened in 2016, and involves valuable presents and gifts – such as cigars and bottoms of champagne – allegedly received by Netanyahu and his wife from several wealthy acquaintances in exchange for favours.

Relates to recorded conversations between Netanyahu and Arnon Mozes, chairman and editor of Yedioth Ahronoth, one of the largest newspapers in circulation in Israel.

The conversations are said to have discussed legislation that could harm a major competitor of the newspaper – Israel Hayom, despite it being seen as pro-Netanyahu. In exchange, Netanyahu is said to have received positive coverage.

‘It is an attempted coup based on fabrications and a tainted and biased investigative process,’ Netanyahu said during a televised speech after the indictment was announced.

‘I will continue to lead the country, according to the letter of the law, with responsibility, devotion and concern for all of our futures,’ he said, standing at a podium against the backdrop of four Israeli flags in his official residence.

Netanyahu added that the indictment was based on ‘false accusations’ and a systematically ‘tainted investigation.’

It is the first time a sitting Israeli prime minister has been charged with a crime.

In the second case, he is accused of trying to orchestrate positive coverage in a major Israeli paper in exchange for curbing distribution of a free pro-Netanyahu tabloid.

The third, dubbed Case 4000, which will be the focus of Monday’s first witness testimony, alleges that he backed legislation worth hundreds of millions of dollars to the owner of Israeli telecom giant Bezeq in return for positive coverage on its news site Walla.

He was formally charged over the alleged offences in January 2020 after he withdrew his appeal for immunity – which the Knesset was widely expected to reject.

Netanyahu has maintained his innocence and denied any wrongdoing in the three corruption cases, saying he is a victim of a political witch-hunt.

Netanyahu appeared in court for the first evidentiary hearing of his trial on charges of corruption, fraud, bribery, and breach of trust, on April 21.

Israeli law does not require prime ministers to resign while under indictment, and Netanyahu has refused to do so.

His trial, in which he pleaded not-guilty, started last year and expected to take up to two years. 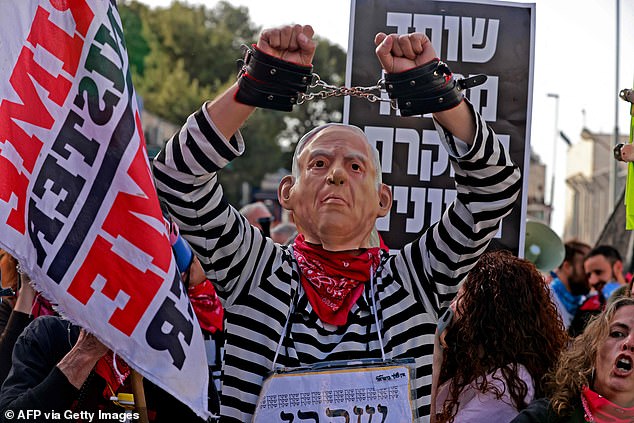 A protester wearing a mask, depicting Israeli Prime Minister Benjamin Netanyahu, attends a gathering outside the district court in Jerusalem on April 5

A close relationship with Trump

Netanyahu enjoyed a positive relationship with US President Donald Trump after years of strained relations with Barack Obama.

Together Netanyahu and Trump worked towards the Deal of the Century – an agreement intended to move towards ending the Arab-Israeli conflict by providing a framework for the establishment of a Palestinian state.

The deal, unveiled in January 2020, recognised Israeli sovereignty over major settlement blocs in the West Bank while offering to more than double the territory currently under Palestinian control.

Netanyahu and Trump presented the deal as a ‘win-win’, but it was widely rubbished by Palestinians, who were not involved in negotiations – and termed the deal the ‘slap of the century’. 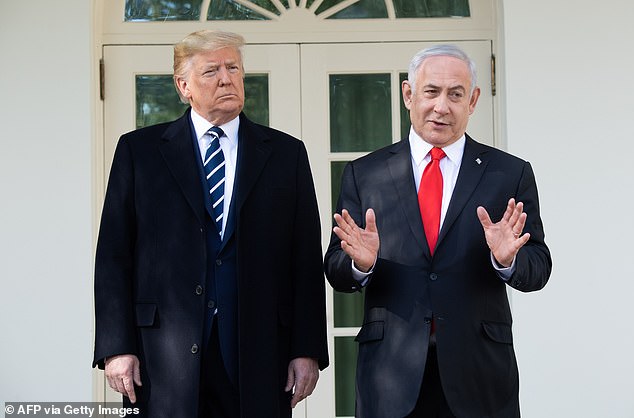 Four Arab countries – the United Arab Emirates, Bahrain, Sudan and Morocco – normalised relations with Israel in late 2020 in a deal known as the Abraham Accords.

The agreements were signed by Trump, Netanyahu, and the Emirati and Bahraini foreign ministers at the White House on September 15.

Each of the four leaders signed four copies of the Abraham Accords – one in English, one in Hebrew and two in Arabic.

At the time, Netanyahu said Israel was negotiating normalisation deals with five other Arab states, but he did not offer hints as to which ones those may be.

He later signed normalisation agreements with Sudan and Morocco in October and December respectively.

The deals were a dramatic shift of power dynamics in the Middle East, where Israel had been consigned to relative pariah status.

Trump then gifted Netanyahu US recognition of Jerusalem as Israel’s capital, moving the US embassy there, as well as recognising Israel’s annexation of the Syrian Golan Heights. 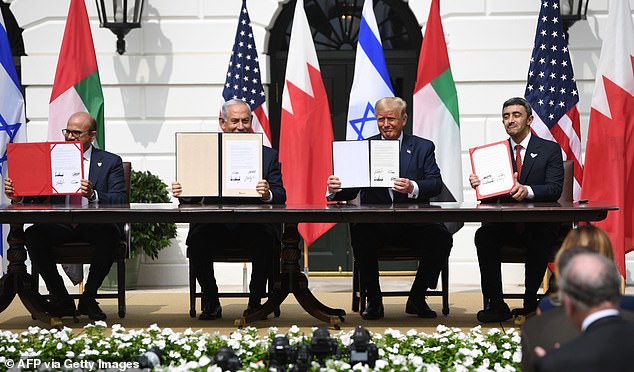 The four leaders hold up the signed copies of the Abraham Accords – they signed one in English, one in Hebrew and two in Arabic – at the White House on September 15, 2020

In a memorable speech, Netanyahu used a visual aid – a cartoon drawing of a bomb – to demonstrate the necessity of taking action against the Islamic Republic.

He told delegates the failure to establish ‘red lines’ to stop Tehran from building a nuclear bomb ‘by next spring, at most by next summer’ would be catastrophic.

‘At this late hour’, he said. ‘There is only one way to peacefully prevent Iran from getting atomic bombs and that’s by placing a clear red line on Iran’s nuclear weapons programme. Red lines don’t lead to war; red lines prevent war.’

Towards the end of his speech, Netanyahu held up a board showing a cartoon-like diagram of bomb that separated Iran’s nuclear efforts into three stages. 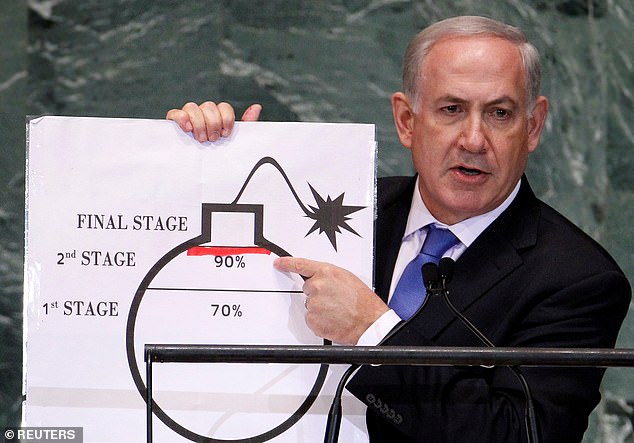 He said that Iran has completed the first stage of developing enough low-enriched uranium and that it was almost at the end of the second stage, the further enrichment of the uranium to weapons grade.

Once that stage was completed next spring or summer, a third stage, preparing an actual weapon, could then be accomplished within ‘a few months, possibly a few weeks’.

Building a detonator for the highly enriched uranium would be relatively simple and easily concealed – and by implication not possible to stop militarily.

Using a felt tip pen, he drew a red line across the diagram and said that Iran must be stopped before it completed the second stage. ‘I believe that faced with a clear red line, Iran will back down,’ he said.

Netanyahu later argued the nuclear deal with Iran was a ‘very bad’ deal that would make the world a ‘much more dangerous place’.

In April 2015, hours before the US and Iran signed the Nuclear Deal, Netanyahu made a furious televised statement claiming the agreement was a threat to the Jewish state.

He said: ‘A deal based on this framework would threaten the survival of Israel… such a deal would not block Iran’s path to the bomb. It would pave it.’

Despite Netanyahu’s protestations, the deal was signed in Vienna on July 14, 2015. It came into force in January 2016.