We have made our live coverage of the coronavirus pandemic free for all readers. Please consider supporting our journalism with a subscription.

NSW Premier Gladys Berejiklian said the current COVID-19 has taken a personal toll, but her government is determined to “crush this thing” as the state reported another death and a further 105 local COVID-19 cases on Sunday, bringing the total for the current outbreak to 1242.

“I am not embarrassed to say that in public life, yesterday was probably the most difficult day I’ve had personally because we don’t take these decisions lightly,” Ms Berejiklian said on Sunday after the introduction of further restrictions across Sydney and other parts of the state. 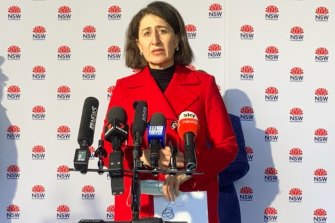 Premier Gladys Berejiklian provides her COVID-19 update on Sunday. She said the pandemic had taken a personal toll. Credit:Renee Nowytarger

A woman in her 90s from south-eastern Sydney died on Saturday, bringing the total for this outbreak to four and the state’s total since the pandemic began to 60. There were 66,671 tests reported in the 24 hours to 8pm on Saturday night.

Twenty-seven cases were infectious in the community.

“I am convinced that working together we will start to see those numbers nudge and are throwing all of our resources and efforts to making that happen and I just want to thank the community for their cooperation,” Premier Gladys Berejiklian said on Sunday.

“We don’t expect those numbers to shift massively for the next three days but we want the community to be more vigilant than ever before, because I am convinced that working together we will start to see those numbers nudge.”

There are 76 cases in hospital, with 18 people in intensive care, seven of whom require ventilation.

The persistent nature of the outbreak has led to tighter restrictions, which came into effect on Sunday, including people from three local government areas not being permitted to leave their LGA unless they were essential health or emergency services workers.

However, the list of essential jobs that are exempt from the travel ban stopping residents from leaving the local government areas of Fairfield, Liverpool and Canterbury-Bankstown has been expanded to include people working at garden centres, bottle shops, factories and other roles such as delivery drivers.

Supermarkets, neighbourhood shops, kiosks and retailers of office supplies were added to the list of essential workers along with alcohol retailers and cellar door premises as well as various manufacturing roles.

Defence and national security staff, politicians and their staff, teachers, delivery drivers and people involved in providing or maintaining utilities such as electricity, gas, water or waste management may also leave the locked-down areas for work. Warehousing jobs and essential services for the maintenance, safety and upkeep of public and recreational spaces are also exempt from the travel ban.

The list of exposure sites grew to more than 460 overnight including Coles, Woolworths, Aldi and IGA supermarkets in various suburbs as well as a cafe in Belmore where a person infected with COVID-19 worked ten days straight on 10-hour shifts from 5am to 3pm.

The scale of the outbreak has forced NSW to seek urgent help from other states to boost its contact tracing capability, signaling the COVID-19 tracking system is struggling to keep pace with the outbreak.

The state made an “open request” for assistance during a meeting of Australia’s federal and state chief medical officers on Friday, with the Commonwealth, South Australian and Western Australian governments all agreeing to help. Victoria knocked back the request, as it focuses on tracing its own outbreak.

The government was considering whether public transport services will be reduced as the new restrictions force a greater number of workers to stay home.