The Taliban orders female Afghan TV presenters to cover their faces – after one official boasted: ‘We keep naughty women at home’

Taliban authorities in Afghanistan have asked television broadcasters to ensure that female presenters on local stations cover their faces when on air, an official said on Thursday.

The move comes days after authorities ordered women to cover their faces in public, a return to a policy of the Taliban’s past hardline rule and an escalation of restrictions that are causing anger at home and abroad.

‘Yesterday we met with media officials… they accepted our advice very happily,’ said Akif Mahajar, spokesman for the Taliban’s Ministry of Vice and Virtue, adding this move would be received well by Afghans.

While he framed the move as ‘advice’, Mahajar added: ‘The last date for face covering for TV presenters is May 21,’ referring to when compliance with the new requirement should begin.

He did not respond to a query on what the consequences would be of not following the advice.

Images of Yalda Ali, a prominent female presenter with Afghanistan’s Tolo News, wearing the face covering on set but removing it for Instagram have been widely shared on social media in light of the latest restriction.

‘This is me, Yalda Ali, a woman, on the verge of being eliminated by the Prevention of Vice and Promotion of Virtue. We are required to appear like this, hereafter,’ Ali posted on her social media account.

Tolo News tweeted the order from the Taliban’s ministry was ‘final and non-negotiable’.

It comes as Sirajuddin Haqqani, Afghanistan’s acting interior minister and Taliban co-deputy leader, joked his government will ‘keep naughty women at home’, referring to women who ‘are controlled by other sides to question the current government’ during an interview with CNN. 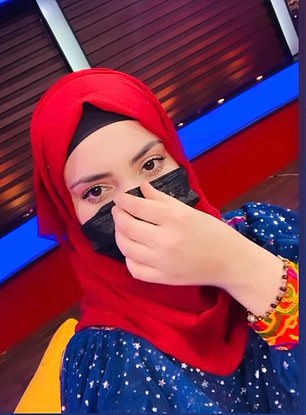 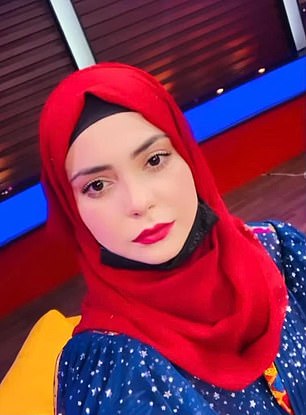 Images of Yalda Ali, a prominent female presenter with Afghanistan’s Tolo News, wearing the face covering on set but removing it to share her message on Instagram have been widely shared on social media in light of the latest restriction 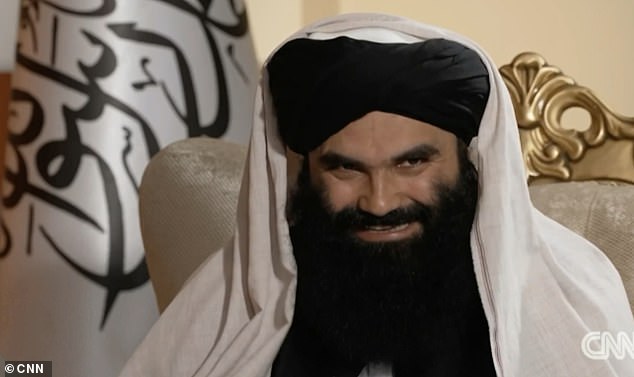 Sirajuddin Haqqani, Afghanistan’s acting interior minister and Taliban co-deputy leader, joked his government will ‘keep naughty women at home’, referring to women who ‘are controlled by other sides to question the current government’ during an interview with CNN 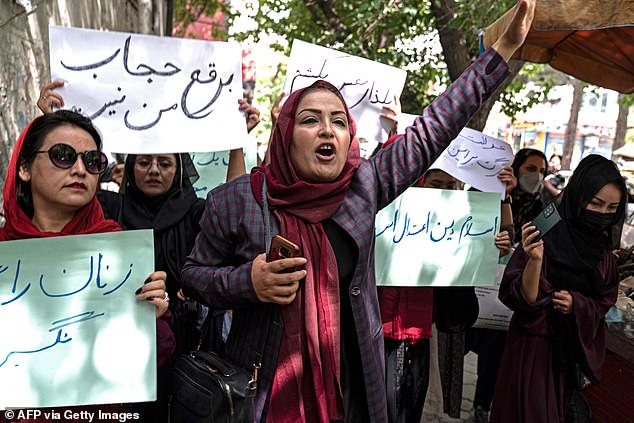 Members of Afghanistan’s Powerful Women Movement, take part in a protest in Kabul on May 10, 2022. – About a dozen women chanting ‘burqa is not my hijab’ protested in the Afghan capital on May 10 against the Taliban’s order for women to cover fully in public, including their faces

Most Afghan women wear a headscarf for religious reasons, but many in urban areas such as Kabul do not cover their faces.

During the Taliban’s last rule from 1996 to 2001, it was obligatory for women to wear the all-encompassing blue burqa.

Mahajar said female presenters could wear a medical face mask, as has been widely used during the Covid pandemic.

‘Today the production department wore masks but the news office continued as usual,’ the employee said.

One station, Shamshad TV, appeared to interpret the order differently as one female anchor appeared with a face mask this morning, while another later in the day went without, showing her face.

It remains to be seen what punishment will be delivered to those found to have disobeyed the instruction.

Women in Afghanistan had pursued work and education after the Taliban government was toppled in 2001 following a U.S.-led invasion, endeavours that were forbidden to them under Taliban rule at the time.

The Taliban says it has changed since its last rule, but since sweeping to power last summer amid the hasty U.S. pullout of Afghanistan has slowly but surely re-introduced regulations restricting women’s rights.

Most recently, Taliban leaders introduced regulations such as limiting women’s movement without a male chaperone, and two weeks ago gave an order that all women must wear a face covering in public. 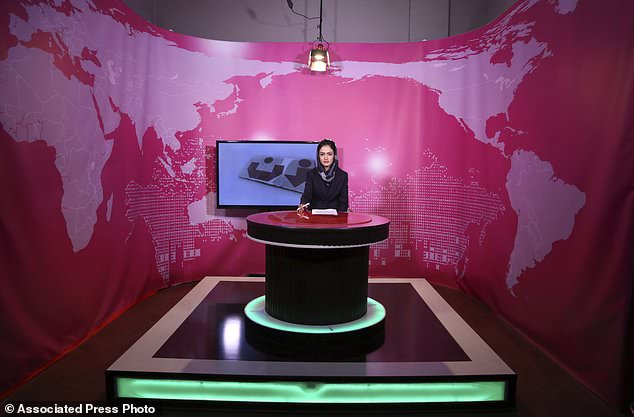 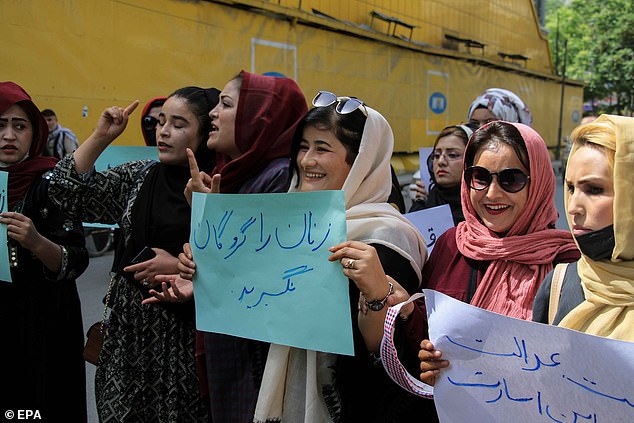 Afghan women hold a placard reading in Dari ‘Dont take women hostage’ during a protest against Taliban’s order for Afghan women to wear all-covering burqa while in public in Kabul, Afghanistan, 10 May 2022 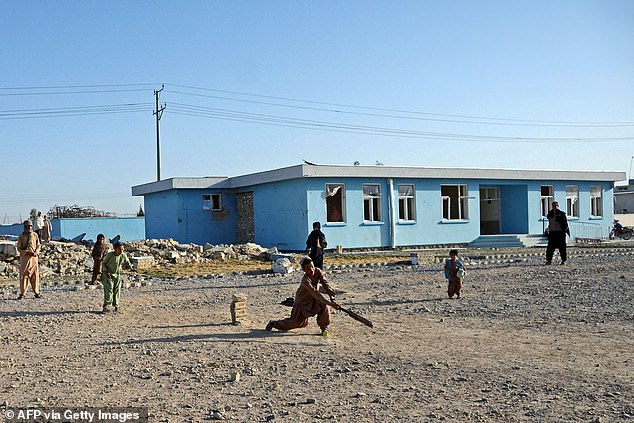 The Taliban said last year all girls would be able to go to school, but girls over the age of 13 are no longer allowed to attend classes (Boys play cricket in front of a school that was damaged during the conflict between the Taliban and Afghanistan’s former ruling government, in Kandahar on May 12, 2022)

The decree said women should leave the home only when necessary and that male relatives would face punishment for women’s dress code violations, starting with a summons and escalating to court hearings and jail time.

Meanwhile, older girls above 13 years old have also yet to be allowed back to schools and colleges – a policy which directly contradicts promises made by Taliban leaders last year that all girls would have the right to an education.

Haqqani, in his first on-camera interview with a Western outlet for years, told CNN’s Christiane Amanpour that the Taliban ‘is not opposed to education (for girls)’, and said the regime would deliver an update on the current restrictions soon.

‘Already girls are allowed to go to school up to grade six, and above that grade, the work is continuing on a mechanism,’ Haqqani said.

‘Very soon, you will hear very good news about this issue, God willing,’ he added, without specifying a timeframe.