There is no precedent for a US Supreme Court vacancy to be filled so close to election day, and both Democrats and Republicans are going to try to extract an electoral advantage from this extraordinary situation.

Republicans want to turn the confirmation process into a grievance-fuelled culture war by portraying Barrett – a devout Catholic conservative – as a victim of left-wing bigotry. Democrats want to use the Supreme Court showdown to highlight the precarious status of the Affordable Care Act, also known as Obamacare, and elevate it as an election issue. 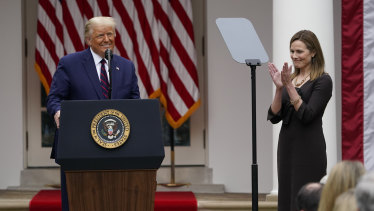 When Barrett was being considered for an appeals court position in 2017, Dianne Feinstein, the top Democrat on the Judiciary Committee probed her on whether her religious views would influence her decisions.

"I think in your case, professor, when you read your speeches, the conclusion one draws is that the dogma lives loudly within you, and that’s of concern," Feinstein asked.

Even many Democrats who strongly support abortion rights believe Feinstein's questioning played into Republican hands. It helped make Barrett a conservative folk hero, and helps explain why Trump picked her as his nominee.

Democrats will have to avoid such unforced errors this time around. As the mother of seven children – including two adopted from Haiti – Barrett will present as a sympathetic figure for many Americans. Democrats have to be careful not to be seen as attacking her for her faith or personal life.

Republicans have already tried to create this perception, despite the fact no elected Democratic officials have yet repeated Feinstein's mistake. So far only a few media commentators and left-wing social media users have strayed into this fraught terrain.

"65 million American Catholics are going to be very interested to learn that @JoeBiden’s Democrats think they can’t be trusted to serve as judges or in public office if they’re 'too Catholic' – Democrat bigotry on full display with #AmyConeyBarrett," tweeted Republican senator Josh Hawley.

"Today the assault may be on Catholicism. But tomorrow, no religion will be safe from the same attacks," tweeted Hawley's Senate colleague Marco Rubio.

It's worth noting that Democratic nominee Joe Biden is a church-going Catholic and one of Barack Obama's two Supreme Court appointees, Sonia Sotomayor, is also Catholic. But the idea that conservatives are under siege by a "mob" of secular, left-wing elites is a powerful motivating force for Republican voters.

Rather than religion, Democrats want to make Barrett's all about healthcare. Polls show voters trust Biden more than Trump to handle this issue, and Democrats would love it to be front-of-mind when people go to the polls.

On November 10 – just a week after the election – the Supreme Court is scheduled to begin hearings on a case that challenges the legitimacy of the decade-old law that has extended health insurance to millions of Americans. Barrett has previously criticised Chief Justice John Roberts' decision to uphold Obamacare in 2012, raising the question of whether she would vote to scrap it.

"If this nominee is confirmed, millions of families' health care will be ripped away in the middle of a pandemic that has infected seven million Americans and killed over 200,000 people in our country,' House Speaker Nancy Pelosi said just after Trump announced Barrett as his nominee.

The Democrats' Senate leader Chuck Schumer said: "The American people should make no mistake: a vote by any Senator for Judge Amy Coney Barrett is a vote to eliminate healthcare for millions in the middle the COVID-19 pandemic."

At this stage it appears extremely likely that Republicans will have the Senate numbers to confirm Barrett to the court before the election. The best Democrats can realistically hope for is that losing this battle will help them win the war for the White House.

Our weekly newsletter will deliver expert analysis of the race to the White House from our US correspondent Matthew Knott. Sign up for the Herald‘s newsletter here, The Age‘s here, Brisbane Times‘ here and WAtoday‘s here.