Yoshihide Suga is not your typical Japanese politician and yet the 71-year-old son of a strawberry farmer is about to become Japan's next prime minister.

The drab and direct chief cabinet secretary of former prime minister Shinzo Abe is a self-made man, rising from local council, through ministerial posts, to become Abe's lieutenant. The distinction is unusual in Japanese politics where dynasties have dominated politics for decades.

Of Japan’s 30 post-war prime ministers, only three have had no political family background. Up until the 1990s, 45 per cent of MPs inherited their seats from their fathers, Australian National University research found.

“That a regular person like me can seek to become a prime minister, that’s exactly Japan’s democracy, isn’t it?” Suga said after announcing his candidacy two weeks ago. 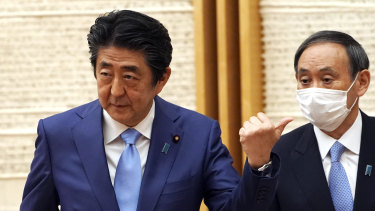 Ultimately, Suga is still a middle-aged man in a blue-suit. Right now continuity is Japan's number one priority. The task ahead of Suga is less transformative than his rise to power.

Japan, the world's third largest economy, is facing more problems than most. The coronavirus, a looming Olympics, a rapidly ageing population and the rise of its neighbour China present immediate challenges politically, diplomatically and economically.

"Suga is a really steady set of hands," said Shiro Armstrong, the director of ANU's Australia-Japan Research Centre. "He was instrumental in carrying out and implementing Abe's domestic and foreign policy."

In his eight-years by Abe's side, Suga helped implement Abe's stimulatory economic policy (which turned around Japan's inflation rate from -2 per cent to 2 per cent) and promoted a more assertive foreign position that saw Japan re-emerge as a key ally in international relations.

The pair also instituted more dull but important changes that took power away from an army of unelected bureaucrats that had stalled changes for decades and centralised it in the cabinet and the Prime Minister's Office.

The test for Suga now is to transition what many see as a caretaker prime minister's spot until the next election in 2021 to a longer term in office. It is here that his lack of a political dynasty – which can bolster factional support like in Australian politics – may present a significant hurdle.

"He is also not really popular among the grassroots," said Armstrong. "He will have to make some pretty big progress quickly to take them through to the next election."

Tokyo Governor Yuriko Koike looms as a potential challenger if the spirit of political reform continues. She, like the state premiers in Australia, has marked herself out for her leadership during the pandemic, putting pressure on the Abe government to bring in tougher restrictions for the health of her citizens and earning herself a popularity boost in the process.

For Australia, Suga's steady-as-he-goes approach is welcome. The biggest challenge for Japan internationally is managing the US-China relationship. As one of China's closest neighbour's Japan's quiet diplomacy is vital to Australia understanding the region amid rising levels of volatility.

"They are extremely pragmatic," said Armstrong. "When they have disagreements with China they have strong links between government, businesses and people-to-people that means there is still dialogue when leaders can't easily talk."

No doubt the Morrison government – which has no ministerial contact with China – will want to keep learning from Suga as it did from Abe.