After a decade of “debt and deficit disaster”, we have entered a new era. Any government's primary job now is to stimulate the economy. State and federal, Liberal or Labor, it is no longer about ideology. Whether it is Dan Andrews' $3 billion package just announced this week or the Morrison government’s delayed COVID budget, which is getting the final touches before being sent to the printer, the approach will be the same. Borrow, stimulate and spend while global interest rates are near zero and work out later how to pay for it all. 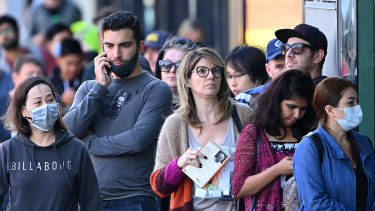 Queues at Centrelink in Melbourne on March 24.Credit:Getty Images

Infrastructure will feature heavily for all state and federal administrations and we will soon see a rebound from today's high unemployment. Next year's problems will be “on-shoring” of supply chains, capacity constraints and material and labour shortages. Workers with critical skills may again need to be found through targeted immigration to plug gaps in engineering and construction. Training the redeployed and unemployed cannot happen overnight.

The other issue the federal budget needs to urgently address is the blunt instrument used to keep businesses from closing during 2020. No one likes a dobber and I am not the first person to break this terrible secret, but people are ripping off the JobKeeper income support scheme left, right and centre. Will this be fixed on October 6?

Offering free money from the government seemed like a great idea back in March. Many people were of the view that channelling JobKeeper through the Australian Tax Office would act as a brake on people rorting the emergency scheme. After all, who wants to get into an arm wrestle with the tax office? Turns out we were wrong. Providing a pipeline of cash was always going to trigger a greedy response from some who spotted an opportunity.

Cafe owners report they are struggling to get people to do shifts selling takeaway cake and coffee − everyone who applies for a job wants to get paid cash. They are all on JobKeeper, and you suspect some are doing rather nicely compared with their usual income in the gig economy.

Then the tradie who comes to do an urgent essential appliance repair wants cash. Talk to the staff in a local food shop − cash. The local dry cleaners − suddenly no eftpos any more, “only cash at the moment”, they apologise. Ironic when we are told by the doctors that cash is a possible source of germ transmission and the health advice is to use cards!

The worst rort would have to be the applicant who claimed JobKeeper on the grounds they had lost their job running their self-managed superannuation fund. The SMSF holds millions of dollars in assets. It is not difficult to contrive to meet the guidelines and to massage the accounts to qualify. On any view, it is hard to see how that deserves taxpayer assistance. Millionaires claiming JobKeeper − you better believe it.

Back in March there was no consideration of an asset test to go with the income test as that would have inhibited the rapid flow of money. So it was done in the same way as the untargeted first home buyers scheme of Peter Costello. Millionaires got that too − it was thought to be more expensive to police the scheme than the leakage warranted.

Beefing up the ATO compliance department, audit and even fraud now needs to be the next phase in JobKeeper. Josh Frydenberg will need to have a chat to the Assistant Treasurer about that − if Michael Sukkar can be distracted from the more urgent and pressing hobby of alleged branch stacking in the Liberal Party.

And what of the publicly listed companies brazenly paying their executives whopping bonuses and shareholders collecting generous dividends at the exact time when those same companies are claiming they need to be propped up by taxpayer handouts? Breathtaking.

What about some of our biggest and most successful retailers telling landlords they cannot afford rent but paying a bonus to the boss?

The arrogance and sense of entitlement is incalculable − unlike the rort, which can be exactly calculated. Billions into private pockets from wasted precious public funds. And much of it has ended up in the hands of some of the very same people who were demanding the scheme be urgently implemented to save jobs. Whose jobs? Theirs or their staff's?

This federal government has invested enormous amounts in making life hell for welfare cheats and even went so far as to make life hell for people who were not welfare cheats but were declared to be for no reason whatsoever. They have said sorry, but no one lost their job for trying to snitch a billion dollars from the poorest people in Australia by bullying and intimidating them into repaying money they did not owe.

The idea of JobKeeper was to help ordinary Australian workers and their families avoid catastrophic loss. It was not supposed to be an opportunity for the looting of public coffers on a scale that would make Vladimir Putin blush.

Jon Faine is a former presenter on ABC 774.