One of the enduring mysteries of the criminal trial of Eddie Obeid, his son Moses, and Obeid snr’s former ministerial colleague Ian Macdonald is the identity behind a Twitter account used to harass journalists, make scathing comments about the Crown’s case and question the credibility of prosecution witnesses.

According to legal experts, the anonymous tweeter may be committing a criminal offence.

There are about 20 regular attendees at the trial in Supreme Court 9D in Sydney's Law Courts complex, including court staff, legal teams for the prosecution and defence, several journalists and, up until recently, the three accused. Since late August, Eddie Obeid has been appearing remotely. 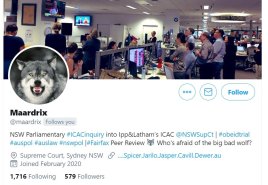 The anonymous twitter account which is used to harass journalists and ridicule the Crown case again Ian Macdonald, Eddie and Moses Obeid.Credit:Twitter

The anonymous tweeter purports to record what is occurring inside the courtroom.

The Twitter account @maardrix was set up when the trial commenced in February and the account’s location is listed as “Supreme Court, Sydney.”

The profile photo for Maardrix is a wolf baring its teeth accompanied by the words: "Who's afraid of the big bad wolf?"

The background consists of a photograph of The Sydney Morning Herald newsroom taken on December 15, 2016, when journalists gathered to watch Eddie Obeid sentenced to three years in prison for misconduct in public office over café leases at Circular Quay. 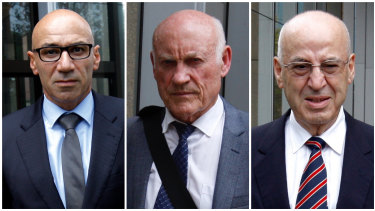 The anonymous account is dedicated to the “injustice” of the case against former mining ministers Obeid, 76, and Macdonald, 71, and Moses Obeid, 51.

The trio, who have pleaded not guilty, are in the middle of a lengthy criminal trial. This follows a highly publicised investigation by the Independent Commission Against Corruption which commenced in 2012.

The Crown case is Mr Macdonald leaked confidential information to Moses Obeid which enabled the family to negotiate a $30 million payout, with a promise of a further $30 million, from the winning bidder for a coal exploration licence that covered the Obeids’ farm in Mount Penny, in the Bylong Valley.

The anonymous tweeter has a detailed knowledge of the defence case and the witness list.

The prosecution case is repeatedly ridiculed by Maardrix. “This case is falling apart and the dpp are frantic. As is Kate … Exculpatory evidence on its way. Prepare for the explosive NSW corruption scandal to fizzle into nothing,” @maardrix posted on 19 February.

The following day this tweet was posted: “Sit back and enjoy as the Obeid scandal turns into the ICAC scandal. No evidence = the crown is just short of insisting that we all use our imagination.”

Since then Maardrix has posted further tweets critical of the prosecution including: "Another dog day for the Crown," “Crown has taken a major hit to their case,” “Crown was left devastated” and “#Obeidtrial is blowing up.”

One of the many critical posts about the Crown’s case in the trial of Ian Macdonald, Eddie and Moses Obeid. Credit:Twitter

The anonymous account hasn’t spared Crown witnesses. Moses Obeid’s former neighbours in Elizabeth Bay gave evidence that Moses had encouraged them to buy a neighbouring property at Mount Penny, telling them it would be a life-changing experience and could be worth as much as $100 million to the Obeid family.

Maardrix tweeted, “Star crown witness Peter Fitzhenry fails to assist the dpp” and his wife Nicole “ failed to remember facts & dates…. Her story has varied from sentence to sentence.”

The anonymous person is particularly contemptuous of a key Crown witness yet to give evidence. This witness, who Maardrix names, is alleged to be a deceitful, brain-damaged liar.

When a journalist tweeted that she found it “wildly amusing” that Eddie Obeid referred to his five sons collectively as the “Boyz” with a “z”, Maardrix replied: “Haha me too. I’m sure we find it amusing for different reasons though.”

Maardrix is also consumed with wreaking vengeance on both the ICAC, which is referred to more than 100 times in the tweets, and this reporter.

“Kate McClymont has shown her face again in the Supreme Court. Keen to see how today’s events get twisted by her into a fantasy of corruption … still no evidence of viable witnesses,” Maardrix posted at 10.44am on March 10.

Less than an hour later, the anonymous person tweeted again: “Guess you missed what happened in the trial just then Kate. Outside playing with the dogs again.”

When the trial resumed in August, after a lengthy break due to the coronavirus pandemic, Maardrix named this reporter in a tweet which included a meme of a chair which slowly swivelled around to reveal a seated dog. The caption reads: “I’ve been expecting you.”

“It is an offence in NSW to use a device to make an unauthorised transmission from a courtroom,” said Professor David Rolph from the University of Sydney Law School.

Under the Court Security Act 2005 it is a criminal offence, which can result in a fine or imprisonment or both, to post information that forms part of the proceedings from the courtroom onto social media sites.

There are exceptions, including where a judge gives permission to journalists.

Professor Rolph also raised potential contempt issues. “It is contempt if a publication actually interferes or poses a real risk of interference with the administration of justice. The risk is higher where there is a jury, rather than a judge sitting alone.”

In this case, Justice Elizabeth Fullerton is hearing the trial without a jury. The evidence is expected to conclude in November. Final submissions will be in January and a verdict is expected some time after that.

Our weekly newsletter will deliver expert analysis of the race to the White House from our US correspondent Matthew Knott. Sign up for the Herald‘s newsletter here, The Age‘s here, Brisbane Times‘ here and WAtoday‘s here.