As Victoria moves out of crisis mode, with infection numbers dropping to single digits, the focus shifts to the long term – how we, as a nation, live with this virus for possibly years to come.

The pandemic is only getting worse overseas – France and Britain, are recording more than 20,000 cases a day. In the United States, that number tops 60,000. 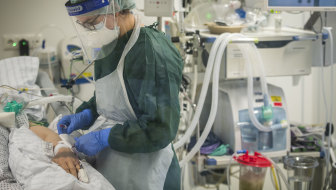 A nurse looks after a COVID-19 patient in the intensive care unit of a hospital in Essen, Germany this week.Credit:Getty Images

The race for a vaccine has no clear end in sight nor any certainty about how effective it will be in containing the spread of COVID-19. Only one human virus has ever been eradicated with a vaccine – smallpox – and that took almost 200 years.

Doctors have worked out ways to reduce the severity of this disease since the first recorded infections in China, but advances in treatment have only been incremental and COVID-19 is still killing about 40,000 people a week.

Meanwhile, in Australia, we now have just over 200 active cases and no one today requiring intensive care treatment. We have inflated a bubble around ourselves that has protected us, in large part, from the worst of this pandemic. 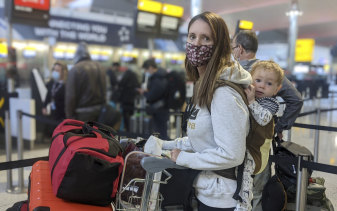 Kate Smith with her one-year-old son, Lleyton, at Heathrow Airport checking in for flight QF110 to Darwin, which landed on Friday.Credit:Latika Bourke

Yet as the second wave nears its end and state borders hopefully reopen across the country, we need to have national consensus on how to live with COVID-19 until the pandemic is over – and that includes how much freedom we should have to interact with the rest of the world.

In March, Australia banned its citizens and permanent residents from leaving the country. The government also mandated that all arrivals into Australia would have to quarantine in hotels for two weeks, after an earlier order to self-isolate at home proved ineffective.

That decision to impose hotel quarantine on arrivals has stopped thousands of cases in their tracks. So any move to ease restrictions on overseas travel must be dependent on protective measures that stop travellers bringing the virus home with them – either through limiting travel to other countries that have had similar success to ours, such as New Zealand, or through an expanded quarantine program.

Victoria knows all too well what can happen when quarantine fails. When the virus escaped quarantine in Melbourne, it unleashed a second wave of infection that left more than 800 people dead, the state paralysed and national unity shattered. 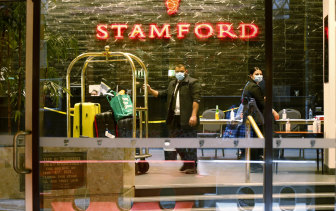 Staff at the Stamford Hotel in Melbourne move luggage for guests in quarantine in June.Credit:Getty Images

It also forced Victoria to stop its quarantine program, which once took the lion's share of returned travellers, shifting the burden to other states and territories. There are still 30,000 Australians overseas struggling to get onto one of the few expensive flights home.

The federal government’s effort to repatriate those stranded Australians, starting with a flight from Heathrow that landed in Darwin on Friday, carrying about 170 relieved expats, will begin to ease the wait for a place in quarantine.

Premier Daniel Andrews signalled on Friday that Victoria wants to reboot its quarantine program – but not until the hotel quarantine report is handed down.

"We know there are a significant number of Aussies who are overseas and want to be home by Christmas and I'd very much like to have them flying direct into Melbourne, those that need to come to our state, flying direct," he said.

It is to be expected that any new Victorian quarantine program – whether all hotel or mixed with monitored home detention – is much more rigorously run and closely monitored.

But quarantine isn't the only answer. Australians are not going to be able to let their guard down entirely. Social distancing, cleaning and crowd controls must stay in place even during the summer we have now been promised, when we may return home from overseas, travel interstate and finally greet all those from whom we have been separated by the pandemic.