As hostilities between the states and the federal government over pandemic border closures escalated on Wednesday, The Sydney Morning Herald and The Age obtained arrivals data from the Department of Home Affairs, revealing thousands of people are entering the country each month for non-essential purposes. 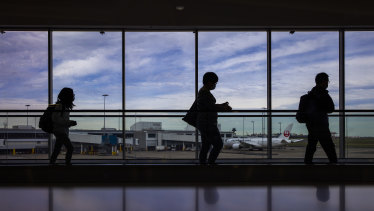 More than 10,000 travellers entered Australia to visit friends, go on holiday or for business trips in April.Credit:Getty Images

The data does not include travellers entering under the travel bubble with New Zealand.

The Queensland and Western Australia premiers sheeted home blame for the outbreaks to the federal government for its border policy.

“The borders are not genuinely closed and these travellers are displacing Australians who are genuinely stranded overseas,” Queensland Deputy Premier Steven Miles said.

However, Home Affairs Minister Karen Andrews accused the states of trying to “deflect from their own quarantine failures”.

“Let me be clear, Australia’s borders are closed,” she said. 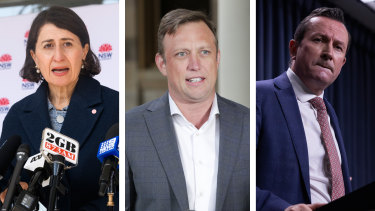 “Some are legitimate but the vast majority of people going overseas, in my view, shouldn’t have,” he said.

“I think we need to take a much tougher approach with people going overseas, particularly to COVID-ridden countries and then bringing it home.”

It was revealed by the Queensland government that its latest outbreak spawned from an unvaccinated traveller allowed to “come and go repeatedly” between Australia and Indonesia, doing multiple stints in hotel quarantine.

Meanwhile, in South Australia, the ABC reported authorities allowed a family to fly in from Indonesia on a privately funded medevac flight after testing positive for the highly infectious Delta strain.

Mr Miles pointed to data from the Australian Bureau of Statistics showing the number of non-citizens arriving on temporary or permanent visas climbed to 20,000 in May.

“Thousands of people are being allowed to travel here who are not stranded Aussies,” Mr Miles said.

“In addition to the non-Australians returning, every month about 40,000 Australian citizens and about 6000 permanent visa holders are allowed to leave the country.

“Many of them seek to return. Rejoining the queue, going back through hotel quarantine, putting our community at risk.”

“The data from the Australian Border Force sets out very clearly that, on average, 80 per cent of returning travellers to Australia are either Australian citizens, permanent residents, or immediate family members,” she said.

She said Queensland Premier Annastacia Palaszczuk was “arguing against her own travel to Tokyo” to attend the Olympics.

In response to questions about the infected traveller from Indonesia, Ms Andrews said the government was “going through a process of looking at” exemptions allowing people to make multiple trips despite the border closures.

However, she did not believe it was necessary to lower caps on overseas arrivals.

“It’s one of the issues that we have to deal with now, which is dealing with specific needs of our economy while at the same time making sure that we are able to bring in as many vulnerable people and return as many Australians as we possibly can,” she said.

According to the Australian Border Force, between March 2020 and the end of May this year, 156,507 Australian citizens and permanent residents were granted exemptions to depart Australia, while 84,031 requests were denied.

Over the same period 49,017 foreign nationals were granted an exemption to travel into Australia and 104,507 had their request denied.

“More than half of these approvals were for those proving a critical skill to Australia,” a Border Force spokesperson said.

A request may cover more than one person and individual travellers may have made multiple requests.