Australian astronomers have chanced across an object hidden in our galaxy that should not exist.

Three times an hour, like clockwork, the object releases a massive burst of radio waves for a minute, briefly becoming the brightest object in the sky at those invisible frequencies. 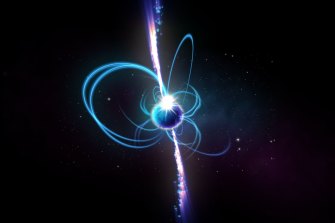 Astrophysicist Dr Natasha Hurley-Walker, from the Curtin University node of the International Centre for Radio Astronomy Research, said that behaviour was unlike anything that had been recorded.

“I was concerned that it was aliens, but what’s really good about these observations is they are over a very wide frequency range,” she said.

“That means it must be a natural process, this is not an artificial signal.” 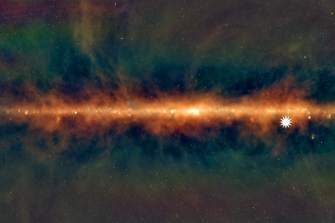 The object is about 4000 light years away from Earth, almost certainly rotating rapidly and has an incredibly strong magnetic field for its size, given the high polarisation of the radiation it gives off.

Objects that switch on and off aren’t new to astrophysicists, who call them “transients” – either slow transients, which are things such as supernovas that happen suddenly and then fade away after weeks or months, and fast transients, which produce rapid bursts of radio waves.

The most famous of these are pulsars, which are spinning neutron stars that produce regular bursts of radiation detected by radio telescopes.

Dr Hurley-Walker said the two main suspects for what the object might be are a magnetar, a pulsar with an exceptionally strong magnetic field, and a white dwarf star with a strong radiation pulse – only one of which has ever been recorded, and in a configuration unlike this object.

“Because we didn’t expect this kind of radio emission to be possible, the fact that it exists tells us that some kind of extreme physical processes must be happening,” she said.

“Being able to get so close – it must be a very compact object that’s rotating with a strong magnetic field – and knowing that there are more of them if we just look for them is a pretty good achievement.”

“It’s exciting that the source I identified last year has turned out to be such a peculiar object,” Mr O’Doherty said.

Dr Hurley-Walker is monitoring the object with the MWA to see if it switches back on, and hopes the much larger Square Kilometre Array can help when that telescope comes online this decade.

“I’ve mentioned this during talks about 20 times last year, and everyone was like “can I put my telescope at your disposal” because it’s such an exciting thing to find a new class of object,” she said.

“So I’m fairly sure if it does switch on again, the eyes of the world will turn on to that patch of sky.

“At the same time we’ll be monitoring to see if another one switches on, and if it does we’ll all go to it at once and that will be a real key to unlock this mystery.”

The research has been published in the journal Nature.