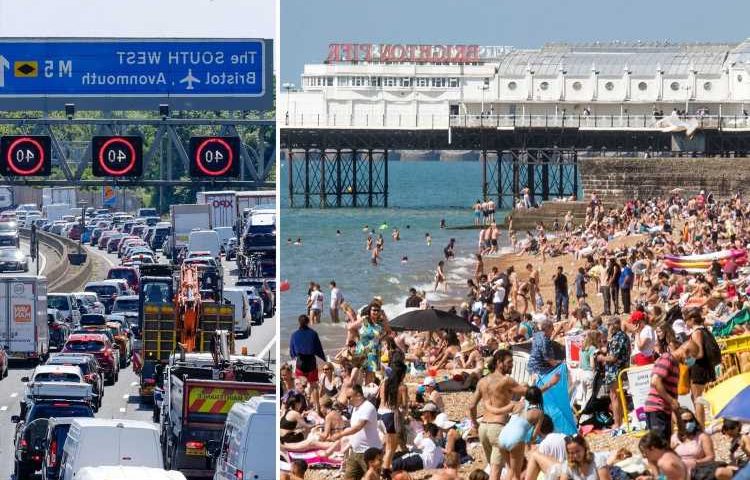 A GREAT British getaway is underway as millions hit the roads for a super sunny weekend.

Unprecedented levels of traffic are expected as temperatures soar to a sizzling 32C, with almost half of drivers planning to get behind the wheel. 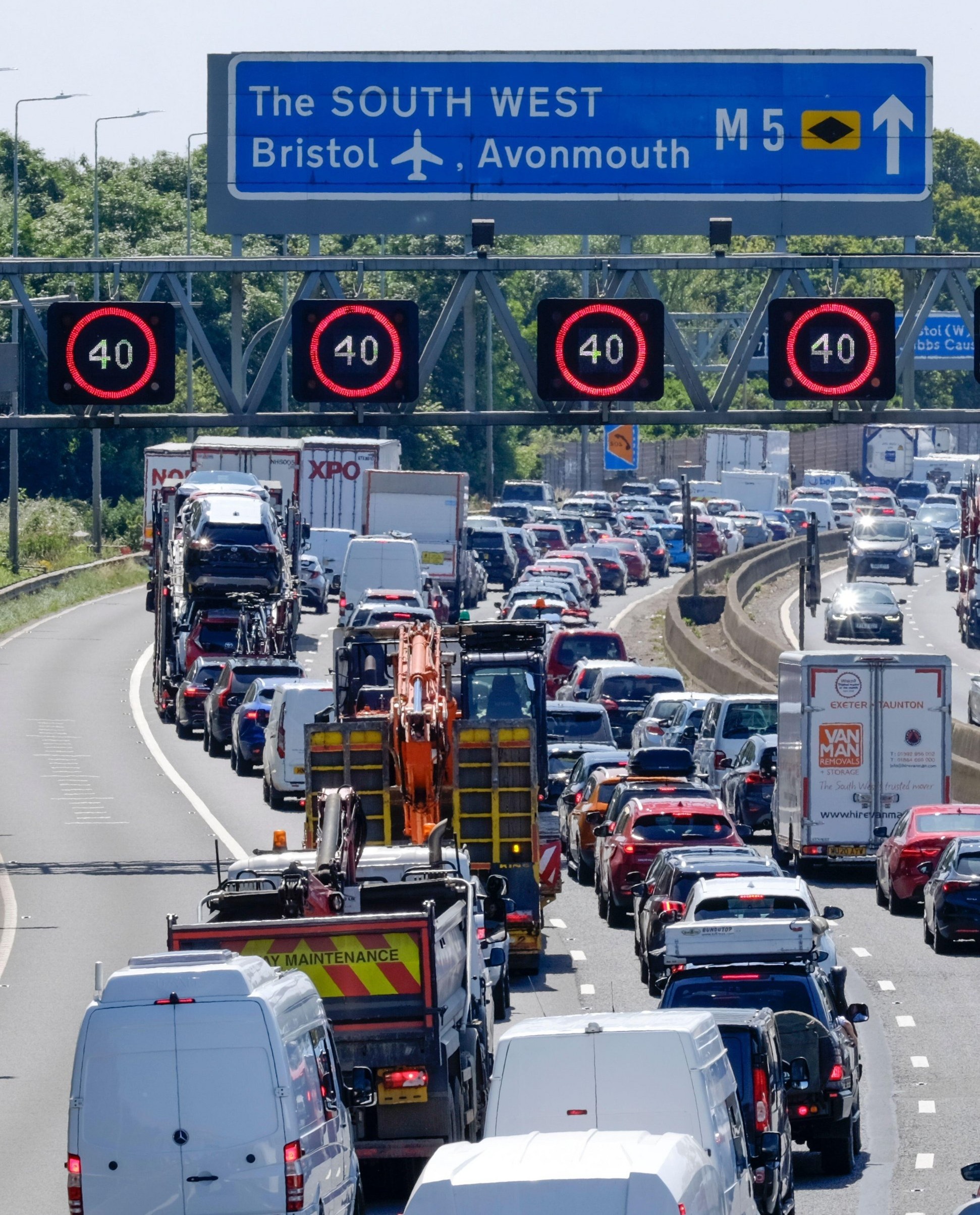 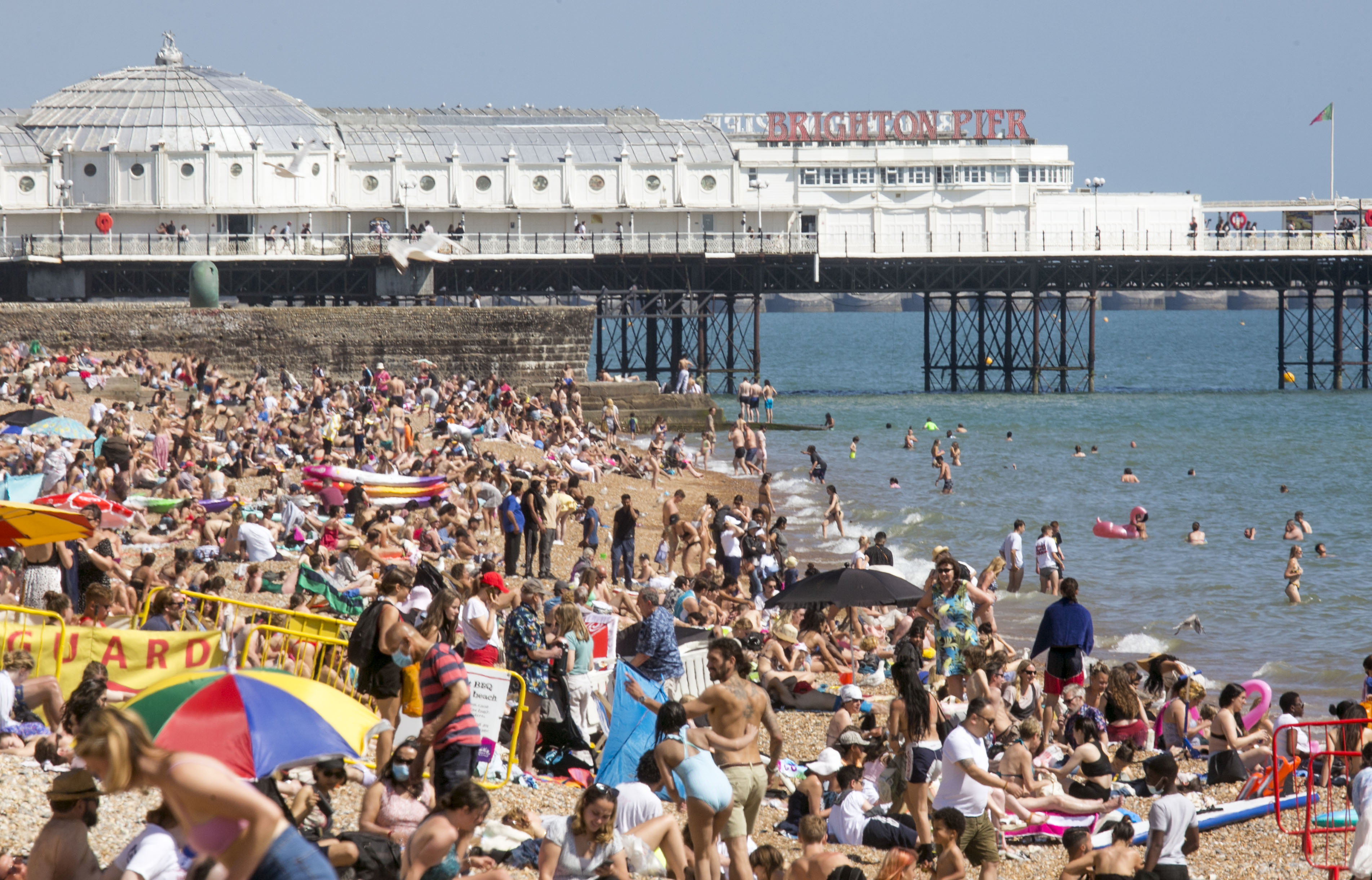 A 'Bermuda blowtorch' heatwave will bring summer blazing back thanks to a tropical blast from the Atlantic.

Britain will be thrust into the furnace over the coming days – just in time for the weekend and when Covid restrictions lift on Monday's 'Freedom Day'.

The summer sizzler will be driven by an ‘Azores High’ weather pattern, also known as a ‘Bermuda high’, experts say.

The roads are already chock-a-block and the UK's seaside resorts are gearing up for a bumper weekend as tourists flock to the coast to enjoy the sun.

The M5 was at a standstill this afternoon with traffic heading south towards Devon and Cornwall, while beachgoers packed the pebbles in Brighton.

Elsewhere, more than 150,000 people are expected to visit Bournemouth, Dorset, this weekend to make the most of the 26C temperatures.

There are around 16,000 hotel rooms and 30,000 beds in the town and it is thought that 97 per cent of these have already been booked up for Saturday alone.

🔵 Read our UK weather live blog for the latest forecasts

Tim Seward, chairman of the Bournemouth Area Hospitality Association, said that pent-up demand caused by foreign travel restrictions was responsible for the surge.

He said: "Any summer day where the sun is shining is obviously going to be busy, but this year there is pent-up demand because people cannot go abroad."

And David Bailey, tourism chief at BCP Council, said: "It's going to be a real bumper weekend."

May Bank Holiday weekend saw 44 per cent of AA members make a trip by car, and this number is set to be much higher in the coming days.

The motoring association estimates drivers heading to the top five UK destinations – Cornwall, Devon, Yorkshire, Norfolk and Dorset – will travel an average of 187 miles to get there.

Chaos is also expected on trains as National Rail has a list of 27 different engineering works taking place over the weekend.

This includes long delays for people travelling in and out of London's Euston, and "major" works in the Bristol area.

Thermometers will rocket into the high 20Cs or beyond on Saturday before breaching 30C on Sunday.

The mercury will be highest across southern and central England on Saturday, with temperatures topping 28C in London, Southampton and Nottingham, and breaching 30C on Sunday.

“We are looking at a spell of extreme heat driven by the Azores-Bermuda high and could see maximum temperatures in the mid- to high-20Cs holding out consistently through the coming days.

“Get ready for the Bermuda blowtorch.”

We are looking at a spell of extreme heat driven by the Azores-Bermuda high.

Jim Dale, meteorologist for British Weather Services, said: “The driver for the hot weather which could see temperatures push past 30C on Sunday will be an Azores High.

“This region of high pressure which stretches from the sub-tropical Atlantic will sit right over the UK letting us really feel the power of the sun, particularly this weekend but also through the start of next week.”

The Met Office predicts the mercury could remain high enough for official heatwaves in parts of the country – defined as "an extended period of hot weather relative to the expected conditions of the area at that time of year, which may be accompanied by high humidity".

And it could see the record for the hottest day of the year so far – 28.4C at London's Heathrow on June 14 – beaten.

Bookmakers Ladbrokes has slashed the odds on thermoters notching up a new record before the end of the weekend to just 1/3.

Jessica O'Reilly of Ladbrokes said: "It looks like the thermometer's only going to keep rising as the weekend goes on, easily seeing the hottest day of the year recorded."

And as the sun beats down, forecasters have warned of "high or very high" UV levels which "can have serious effects on your skin and eyes".

Warnings about extreme heat have also been issued by both medical authorities and vets, urging people to keep the vulnerable and animals safe.

And hay fever suffers have also been alerted that pollen levels will be "high or very high" across most of the UK at the weekend.

Hot weather will hold out through Monday, dubbed 'Freedom Day', when after almost a year and a half Covid restrictions will be lifted.

The rule of six will finally be scrapped indoors and social distancing and table service in pubs is also getting left behind.

Face masks are becoming optional in many venues, and large-scale events like festivals, concerts and nightclubs are making a comeback.