The US is on track to smash voting records as polls closed in the critical battleground states that will decide who wins the presidential election.

Voting has now ended in key states such as Florida, Georgia and Ohio, all of which have been counting early ballots for days and are starting to tally early results. 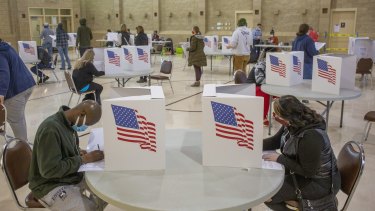 By 11.45am (AEST), Florida had counted about two thirds of its vote, with President Donald Trump and Democratic rival Joe Biden neck and neck. Biden has won Virginia and Vermont, and Trump carried Indiana and West Virginia.

Polling stations also closed in Pennsylvania at midday (AEST) – one of the crucial “blue wall” states that handed Trump the White House in 2016 – but counting only began there today, so it could take days to get a decisive result.

Despite heightened tensions, including National Guards on standby in case of violence, Election Day in America has so far been mostly trouble free, with minor problems such as polling booth delays and disinformation campaigns quickly dealt with by state authorities.

And while a clear result might not be known for some time, both Trump and Biden declared that they were confident about chances of winning the White House as they travelled through different parts of the country to thank voters and volunteers today. 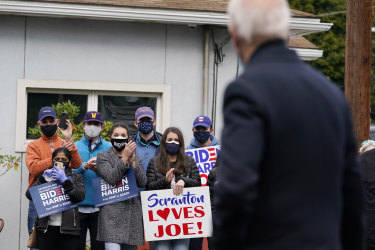 Biden began Election Day attending church near his home in Delaware and visiting the grave of his son, Beau, who died of cancer in 2015.

He then made a pitstop in his childhood home in the Pennsylvania town of Scranton – a tradition he began in 2008 when Barack Obama selected him as his running mate – before greeting voters in Philadelphia to reiterate his message for unity.

“I’m running as a proud Democrat, but if you elect me, I’m going to be an American president,” he said.

Trump, meanwhile, visited his campaign headquarters in North Virginia to thank staff, where he also touched on a similar theme. Asked if he had a message for people who did not vote for him, he replied: “Everybody should come together and I think success brings us together. We’re going to have tremendous success.” 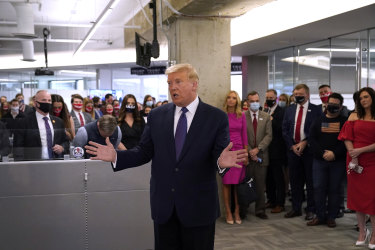 Despite a number of legal challenges and attempts to suppress voters in different states, Americans have turned up in record numbers this year to have a say in who should be their next president.

More than 100 million people had already voted by the time the polls officially opened earlier today, placing the country on track to surpass the 138 million people who took part in the 2016 election when Trump defeated Hillary Clinton.

There had been some reports of isolated problems, but most appeared to have been dealt with swiftly and peacefully.

For instance, four polling stations in North Carolina opened slightly later than planned, resulting in state authorities extending polling times and delaying counting of votes by up to an hour.

There was also a disinformation campaign in Michigan, involving robocalls telling Flint residents that they should vote tomorrow due to long lines today.

“Obviously this is FALSE and an effort to suppress the vote,” Tweeted Michigan Attorney General Dana Nessel. “No long lines and today is that last day to vote. Don’t believe the lies! Have your voice heard! RT PLS.”

Polls have consistently placed Biden on track to win the election, and the latest RealClearPolitics average places the Democrat ahead Trump by 7.2 percentage points nationally and by an average of 2.3 percentage points in the top battleground states.

However, Democrats remain cautious in the wake of the 2016 election, when Hillary Clinton won the popular vote but did not achieve the minimum 270 Electoral College votes required to become president.

This year, Trump’s path to victory appears to be more narrow than Biden’s, and relies largely on the President retaining those states, as well as winning crucial sunbelt state Florida, where Democrats have become increasingly worried in recent days about a potential dip in support from Latino and black voters.

Trump said earlier today that he believed he would win Florida, as well as Texas, where Republicans are currently in court attempting to throw out almost 127,000 early votes.

“WE ARE LOOKING REALLY GOOD ALL OVER THE COUNTRY. THANK YOU!” Trump tweeted shortly after 10am today.