Washington: President Donald Trump says he helped break through a regulatory "logjam" to grant emergency authorisation of convalescent plasma to treat COVID-19, despite his own scientists calling for more studies to definitively show whether it works.

The announcement, at a news conference where Trump was flanked by Food and Drug Administration Commissioner Stephen Hahn and Health and Human Services Secretary Alex Azar, drew criticism from physicians and scientists who said their statements misled the public by overstating the evidence behind the therapy. 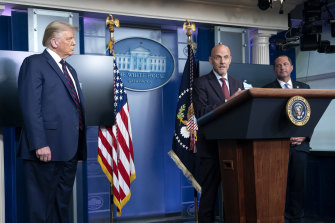 Stephen Hahn, commissioner of food and drugs at the US Food and Drug Administration (FDA), centre, speaks during a news conference at the White House as President Trump and Human Services Secretary Alex Azar look on. Credit:Stefani Reynolds/Bloomberg

"I watched this in horror," said Eric Topol, an influential physician and scientist and director of the Scripps Research Translational Institute. "These are basically just exploratory analyses that don't prove anything. It's just extraordinary to declare this as a breakthrough. . . . All this does is jeopardise ever getting the truth."

The Infectious Diseases Society of America released a statement noting that while there are "some positive signals that convalescent plasma can be helpful in treating individuals with COVID-19", the society believed its benefits needed to be demonstrated in clinical trials that randomly assign patients to receive either plasma or a placebo before it is authorised for wider use.

The Sunday briefing came on the eve of the Republican National Convention, during which Trump hopes to resurrect his flagging popularity, which has nosedived over his handling of the pandemic. He has put pressure on federal agencies to test and approve treatments and a vaccine against the novel coronavirus, which has killed more than 170,000 Americans.

The briefing also landed a day after the President, accused the FDA of impeding enrolment in clinical trials for coronavirus vaccines and treatments for political reasons.

"The deep state, or whoever, over at the FDA is making it very difficult for drug companies to get people in order to test the vaccines and therapeutics," Trump tweeted Saturday. "Obviously, they are hoping to delay the answer until after November 3rd." He tagged Hahn in the tweet.

At the briefing, Hahn struck a more measured tone than Trump, stating that convalescent therapy, in which the yellowish liquid portion of blood is taken from recovered patients and transfused into ill people, had met the standard for emergency authorisation – a lower standard than full approval – and showed "promising efficacy".

But Azar said this was a "major advance" and the kind of result pharmaceutical company executives dream about, even though the authorisation states that more studies are needed, including medical trials that test the treatment against a placebo. The authorisation specifically says plasma "should not be considered a new standard of care for the treatment of patients".

A notice to patients who receive the treatment does not mention that it could help them survive the infection, but says they "may improve faster if they receive plasma."

Hahn stressed his agency's independence on a call with reporters Sunday, saying "the expert scientists at CBER [the FDA's Centre for Biologics Evaluation and Research] "made this decision solely on the data and nothing else."

As Trump, Azar and Hahn left the White House briefing room, reporters shouted questions at Hahn, asking him whether there was pressure on him to authorise convalescent plasma. The three kept walking.

Convalescent plasma is a century-old treatment that was deployed against the novel coronavirus on the theory that virus-fighting antibodies in the plasma could be helpful against a new pathogen. Because of the sound medical rationale for using it and the lack of treatments for patients fighting COVID-19, researchers came together to make it available and have so far treated at least 70,000 patients.

Former FDA commissioner Scott Gottlieb said the blood product – derived from patients who have survived COVID-19 – clearly meets the criteria for an emergency use authorisation.

He said it was "probably of incremental benefit" for COVID-19 patients, but "we have to be careful not to overstate the results".

The most important news, analysis and insights delivered to your inbox at the start and end of each day. Sign up to The Sydney Morning Herald’s newsletter here,  The Age’s newsletter here, Brisbane Times‘ here and WAtoday’s here.