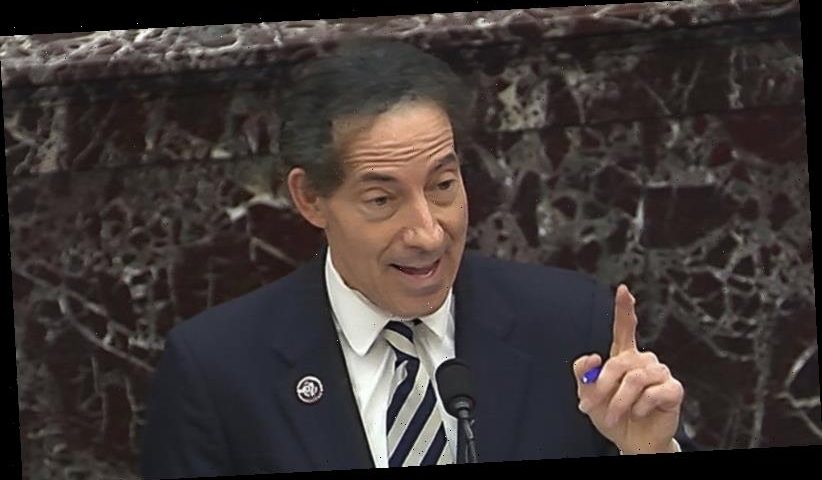 Washington: US Senators risk a repeat of the deadly January 6 assault on the Capitol unless they ban Donald Trump from being able to run for office again, Democrats have argued in the former president’s impeachment trial.

The Democratic impeachment managers, who are concluding their opening arguments in the trial, said that Trump had glorified political violence for years and shown no remorse for his actions in the lead-up to the Capitol riot. 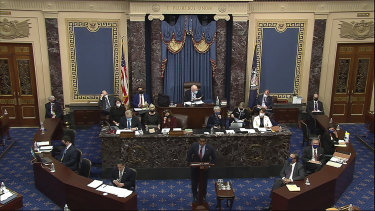 “Is there any political leader in this room who believes that if he is ever allowed by the Senate to get back into the Oval Office, Donald Trump would stop inciting violence to get his way?” Jamie Raskin, the Democrats’ lead impeachment manager, said on Friday (AEDT).

“Would you bet the lives of more police officers on that?”

Raskin said that Trump had flagged he would behave the same way in the future by claiming that his fiery speech to supporters on January 6 was “totally appropriate”.

“President Trump declared his conduct totally appropriate so, if he gets back into office and it happens again, we’ll have no one to blame but ourselves,” Raskin said. 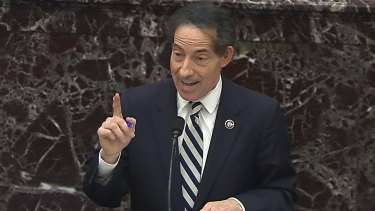 Jamie Raskin, the Democrats’ lead impeachment manager, said that senators would only have themselves to blame if Trump incites violence in the future. Credit:Senate television

The Democrats played a series of video clips of Trump encouraging supporters to rough up protesters at his early campaign rallies, including one in which he offered to pay their legal fees.

“January 6th was a culmination of the president’s actions, not an aberration from them,” Raskin said.

“The insurrection was the most violent and dangerous episode so far in Donald Trump’s continuing pattern and practice of inciting violence.” 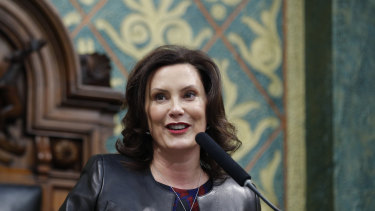 A history of supporting violence: Trump failed to call out the plot to kidnap Michigan Governor Gretchen Whitmer.Credit:AP

Democratic congressman Ted Lieu said: “I’m not afraid of Donald Trump running again in four years. I’m afraid he’s going to run again and lose. Because he can do this again.”

When Democrats finish presenting their case, Trump’s lawyers will have 16 hours to argue in his defence.

Trump’s lawyers have indicated that they will not use all their time, raising the possibility of a final vote on whether to convict or acquit Trump as early as Sunday (AEDT).

If the Senate were to find Trump guilty of inciting the January 6 insurrection, he could then be disqualified from future office.

Following a day of gripping argument, in which the impeachment managers unveiled previously unseen surveillance footage, many senators appeared to be growing restless on day three of the trial.

At times, more than a dozen Republican senators were not in the chamber as the Democrats made their case. One Republican senator, Rick Scott, was seen filling out a blank map of Asia as the evidence was being presented.

Independent Senator Bernie Sanders was slumped over at one point, raising speculation he had nodded off.

Democratic congresswoman Diana DeGette played clips from rioters in which they said they believed they were fulfilling Trump’s wishes and that he would approve of their actions.

“Their own statements before, during and after the attack make clear: the attack was done for Donald Trump, at his instructions and to fulfil his wishes,” DeGette said.

“Donald Trump had sent them there. They truly believed that the whole intrusion was at the president’s orders and we know that because they said so.”

Seventeen Republican senators would be required to find Trump guilty in order to convict him, but a handful of Republicans at most are expected to vote in favour of conviction.