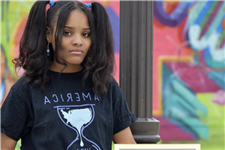 Although she’s only 14, fighting for change in actionable ways is nothing new for global activist Amariyanna Copeny.

The world first met the fiery young changemaker back in 2014, when her advocacy and awareness efforts led her to become the face of the ongoing fight to restore clean water to her hometown of Flint, MI. Fast forward six years and over $1 million dollars in funding raised to support clean water efforts nationwide later, the inspiring teen whose work caught the attention of President Obama before she was even old enough to see a PG-13 movie is now being honored by the UCLA’s Institute of the Environment and Sustainability (IoES).

“It feels amazing knowing that I got such an important award like that,” Amariyanna told ESSENCE.

The young organizer is being recognized by the prestigious university for her work toward environmental justice and clean, safe water. She joins fellow honorees Jaden Smith, who will be honored for his work with his organization Just Water and his efforts to deploy mobile water filtration systems in largely lower-income minority communities, along with four current UCLA grad students who will be recognized for their ongoing research through the university’s efforts towards ensuring communities most impacted by climate change and environmental degradation have a prominent role in generating solutions.

Today, Amariyanna is still on the frontlines of the same fight, but has since expanded her cause to one that is extending far beyond her homestate. “I’m fighting, still, for clean water,” she said. “But for the whole entire country, not just for Flint.”

Asked what advice she has for other young people aiming to follow in her footsteps by finding ways to impact change in their own communities, the high school freshman encourages them to lean on the most powerful tool at their disposal—their voice.

“You have to use your voice and speak out about topics that you really like,” she says. “Like, for instance, if your topic is environmental racism, like me. Make sure to speak on that and make sure you get as many people to listen to you [as possible] because, you never know who’s listening to you. You also want to hijack hashtags. Like, take a trending hashtag then put your video with it that supports whatever cause you’re talking about so you can get many people to stop and listen to what you have to say.”