UK receives 300 ventilators from China to fight coronavirus as Michael Gove says we’ll be producing 1,000 a day by next week but experts claimed NHS will have ‘nowhere near enough’ in time for Easter Sunday peak just eight days away

The UK has received 300 ventilators from China to fight coronavirus, Michael Gove said as he estimated 1,000 new machines will be produced per day by next week.

A team from University College London working with Mercedes Benz has produced a new non-invasive respirator that has been clinically approved, Mr Gove said in a press conference today.

He said the device is vital in reducing the number of patients who eventually need to be intubated.

It comes amid concerns the NHS will have a severe shortage of ventilators to cope with the coronavirus peak over Easter Sunday, with only 30 to arrive in the first batch. 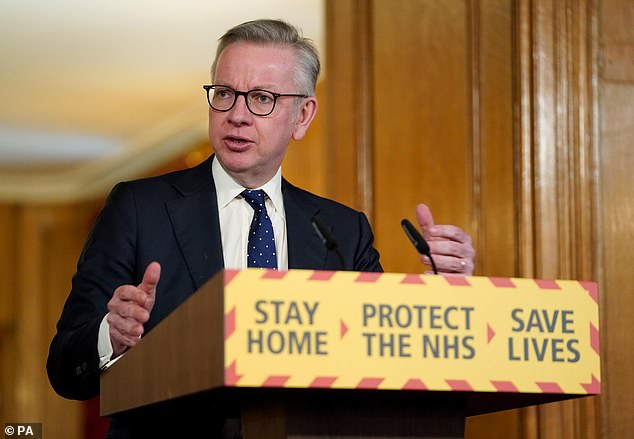 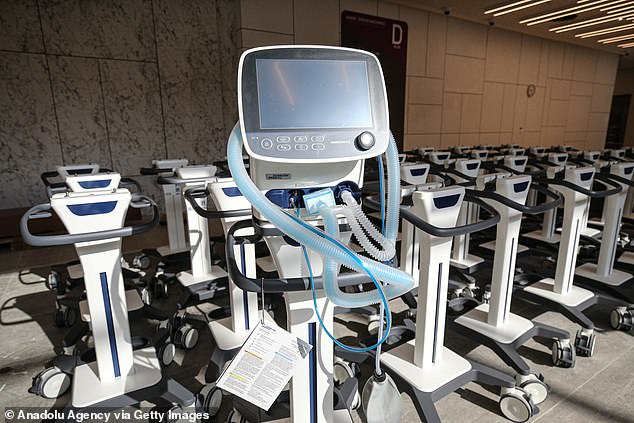 Ventilators allocated for early treatment of coronavirus (COVID-19), are brought to Basaksehir Hospital in Istanbul today. A team from University College London working with Mercedes Benz has produced a new non-invasive respirator that has been clinically approved, Mr Gove said in a press conference

Mr Gove said: ‘They produced 250 yesterday, they will produce the same number today and tomorrow, rising to 1,000 a day next week.

He continued that the Government is also working with UK ventilator suppliers to manufacture existing and modified models in greater numbers.

He said new models have been designed to come on stream soon.

Mr Gove said: ‘The new models that have been scaled up as part of the Ventilator Challenge (a brief put to a consortium of manufacturers) will becoming on production lines this week. 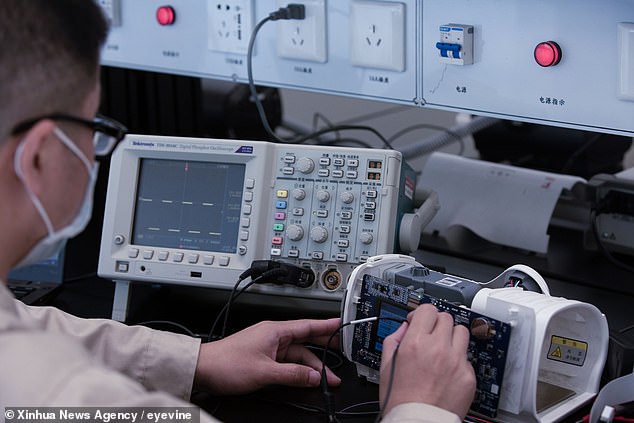 ‘More are coming into production in the coming weeks, subject to safety and regulatory approvals, as part of the Prime Minister’s call to manufacturers to scale up production.’

Mr Gove said the first devices ordered from Oxford-based medical devices company Penlon will begin arriving in hospitals next week, delivered by the Ministry of Defence.

He said the first devices from Smiths Group had been received at MoD Donnington – a military logistics hub in Shropshire.

Mr Gove said: ‘The initial dispatch is the result of scaled up manufacturing of an existing mechanical ventilator design and I am grateful for the efforts of an industry consortium including GKN Aerospace and Rolls Royce.

‘These ventilators will be distributed to hospitals next week.’

Mr Gove said: ‘The more ventilators – invasive and non-invasive – available to the NHS, the more patients get the care they need, when they need it.

‘But the process of design, assembly, testing and manufacture does take time and we need to make sure that these devices are safe and their manufacture scaleable.’

The NHS will have ‘nowhere near’ enough ventilators to cope with the coronavirus peak over Easter Sunday with only 30 to arrive in the first batch, according to The Guardian.

Hospitals across Britain are still 21,825 ventilators short of the estimated 30,000 it will need when the crisis, which has infected over 38,000 Britons, is at its height.

Health Secretary Matt Hancock on Friday said the virus continues its ‘grim march’ and admitted that next week is likely to be worse still, potentially topping out at more than 1,000 deaths per day by Easter Sunday. 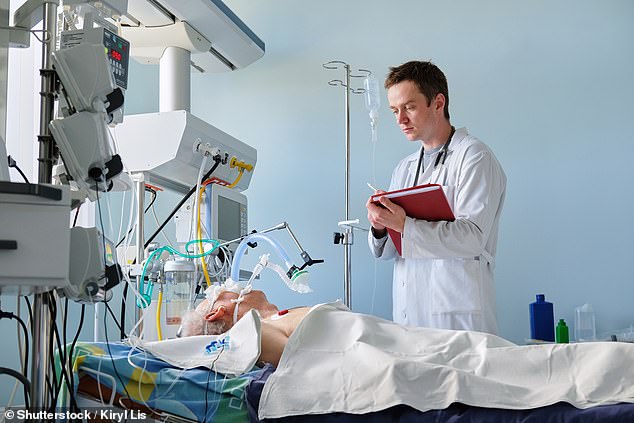 The NHS will have ‘nowhere near’ enough ventilators to cope with the coronavirus peak, according to sources (pictured: file photo of a doctor examining an intubated patient’

Efforts to get manufacturers to produce ventilators are underway, with the government previously ordering 10,000 from Dyson – despite the engineering giant never making them before.

Billionaire entrepreneur James Dyson said ‘the race is on’ to get the medical machines created specifically for the pandemic.

The British firm, most famous for its vacuum cleaners, said it has a prototype tested on humans and could start delivering them from mid-April, pending ‘regulatory approval’.

But sources related to one of the ventilator collaborations within British industry reportedly warned manufacturing targets were ‘nowhere near’ being reached.

One source told The Guardian: ‘You just can’t do this sort of stuff overnight, which is what they’re trying to do. But if there’s a second wave in the winter, we’ll have a lot more by then.’

A second source said it was impossible to ‘produce into the peak’. 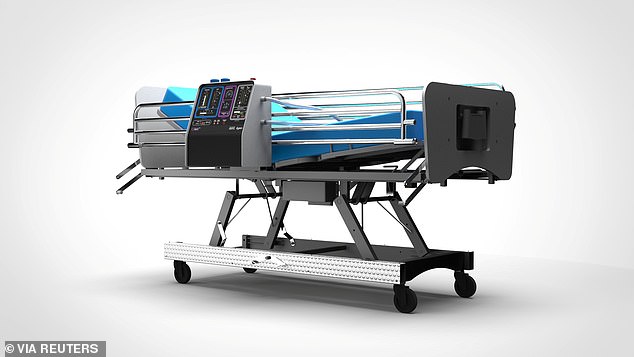 A graphic representation of the CoVent ventilator, designed by Dyson, is seen attached to a hospital bed. Efforts to get manufacturers to produce ventilators are underway

The Ventilator Challenge UK group – which includes Dyson and Rolls-Royce – have said they aim to make 1,500 machines a week by the end of the month, but only 30 are said to arrive in the first batch.

Under codenames Project Oyster and Project Penguin, the consortium has used its design and building resources to deliver two models in two weeks.

Project Oyster has involved making slight tweaks to an existing design by Oxfordshire-based firm Penlon, aimed at speeding up the assembly process.

The consortium is also lending its muscle to increasing production of a device called the ParaPac ventilator, made by Smiths Medical, under Project Penguin.

Consortium lead Dick Elsy said: ‘To provide some context, Penlon and Smiths ordinarily have combined capacity for between 50 and 60 ventilators per week. 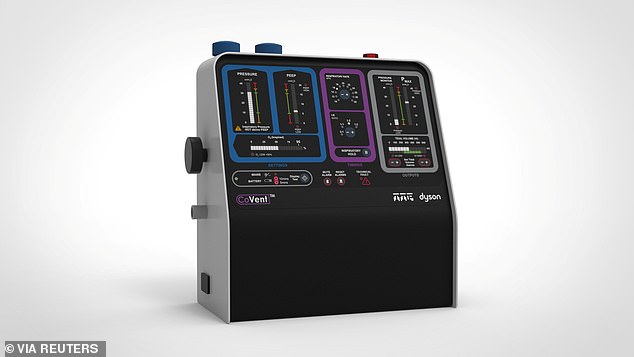 A graphic representation of a CoVent ventilator, designed by Dyson. The Government previously ordered 10,000 ventilators from the manufacturer

‘However, thanks to the scale and resources of the wider consortium, we are targeting production of at least 1,500 units a week of the Penlon and Smiths models combined within a matter of weeks.’

Professor Jonathan Van-Tam, deputy chief medical officer for England, said the government ‘don’t know’ when the peak of the pandemic is expected to be, and expressed confidence in equipment supplies.

Addressing whether the NHS will have enough ventilators during the peak, given some fear they will not receive the critical care they need, he said: ‘I can tell you I don’t think we’re anywhere close to that kind of scenario at the moment.

‘We will watch it extremely closely and we will make decisions as we need to on a day-by-day basis.’

It follows the UK announcing 684 more coronavirus deaths on Friday, taking the total number of fatalities to 3,605.

Yet again the number is a record one-day high – this has been the case almost every day this week, with each day since Tuesday announcing more victims than the last.

The figures mean the number of people dead from COVID-19 in the UK has risen five-fold in a week, from just 759 last Friday, March 27.