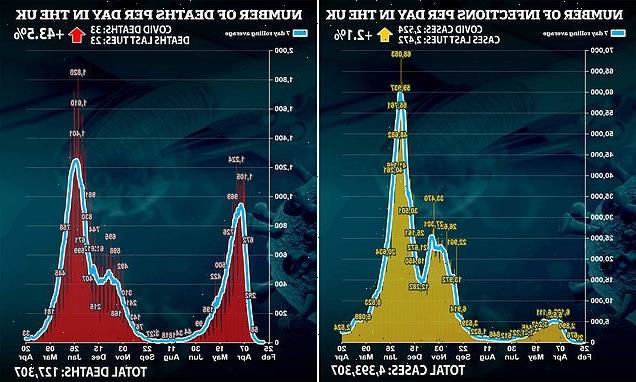 Another 33 Britons have died of Covid and 2,524 more people have tested positive for the illness, health bosses revealed today.

Hospital admissions have dropped by almost 20 per cent, however. Just 192 newly-infected Britons needed NHS care on April 14 — the most recent day statistics are available for. For comparison, the figure was 233 the week before.

But testing numbers jumped massively over the weekend, with 1.7million swabs carried out on Saturday compared to the average of around 900,000. Daily case figures do not show everyone who caught the disease in a 24-hour period. Instead, they only reflect the number of positive tests recorded in the nation system.

Another 99,672 first vaccine doses were also dished out yesterday, taking the UK’s total number of vaccinated adults to 33million. Some 273,751 were also given second dose, with the number fully vaccinated now at 10.4million.

The numbers come after official data today revealed just fourteen people under the age of 20 have died of Covid this year in England and Wales.

Weekly data from the Office of National Statistics also showed daily coronavirus deaths were in single figures in every region of England over the week ending April 9. And the total number of people dying from all causes was below average for the fifth week in a row.

The figures will inevitably pile more pressure on Boris Johnson to speed up his ultra-cautious lockdown-easing plans, which won’t see the next set of restrictions eased until May 17.

The most up-to-date statistics showed that nearly 60 per cent of all the 52,061 Covid deaths in 2021 were in over-80s — with the vast majority being in January when the virus was spreading rapidly and vaccines were only just starting to get deployed. Just 0.03 per cent of fatalities were in under-20s.

But in more proof that the vaccines are working, the number of elderly people succumbing to Covid every week has fallen by 97 per cent since the peak of the second wave in January. Under-60s make-up around one fifth of all Covid deaths now, up from seven per cent during the darkest spell of the crisis.

The ONS figures come after Britain recorded just four coronavirus deaths yesterday, in the lowest daily toll since September 7. Covid metrics are usually low on Mondays due to the way fatalities are logged but were still down on the figure recorded last Monday (13).

The daily death figures, supplied by the Department of Health, differ to the ONS. It counts Covid victims as being anyone who dies within 28 days of testing positive for the virus. And the daily count only looks at registrations not occurrences.

For comparison, the ONS looks at death certificates to determine the true scale of the crisis. The agency believes the overall number of victims topped 150,000 at the end of March. 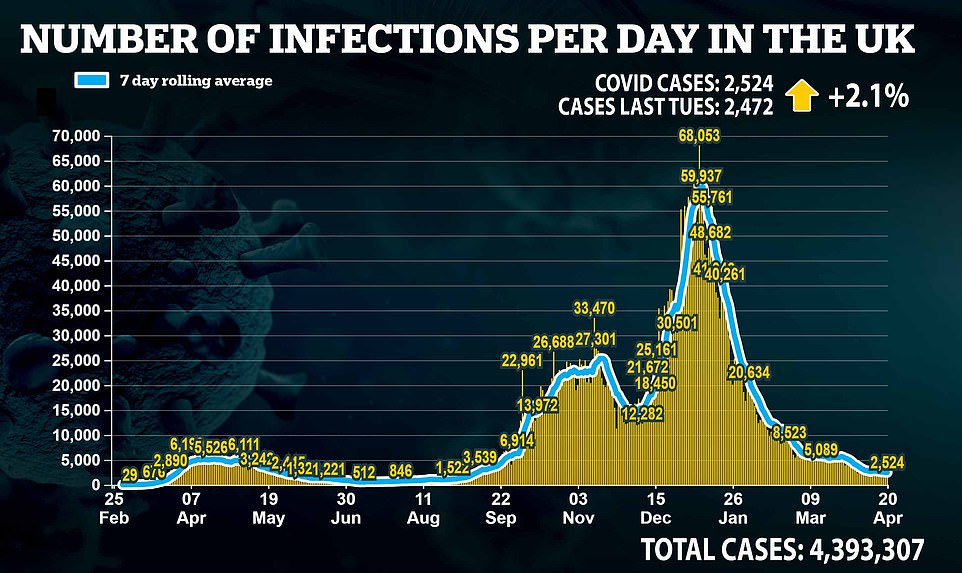 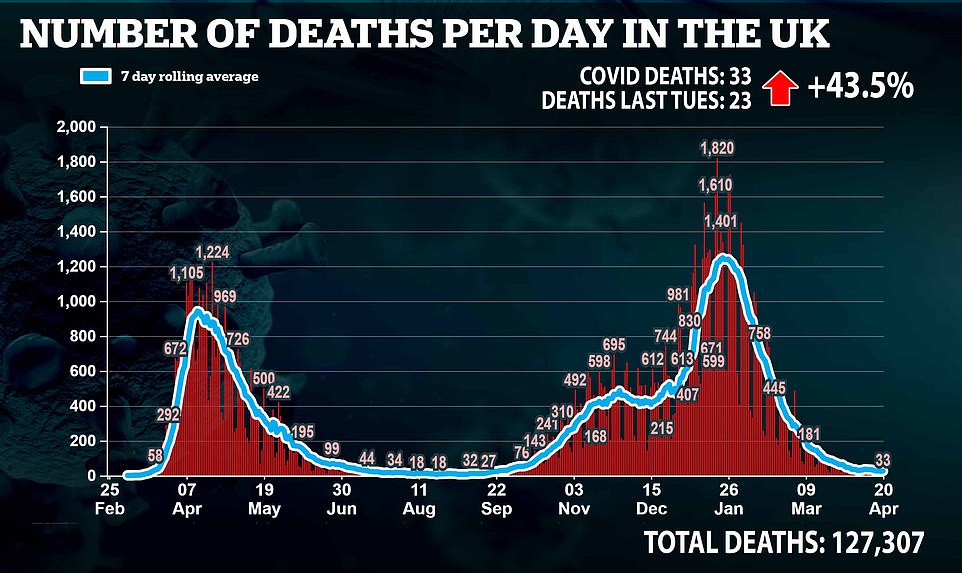 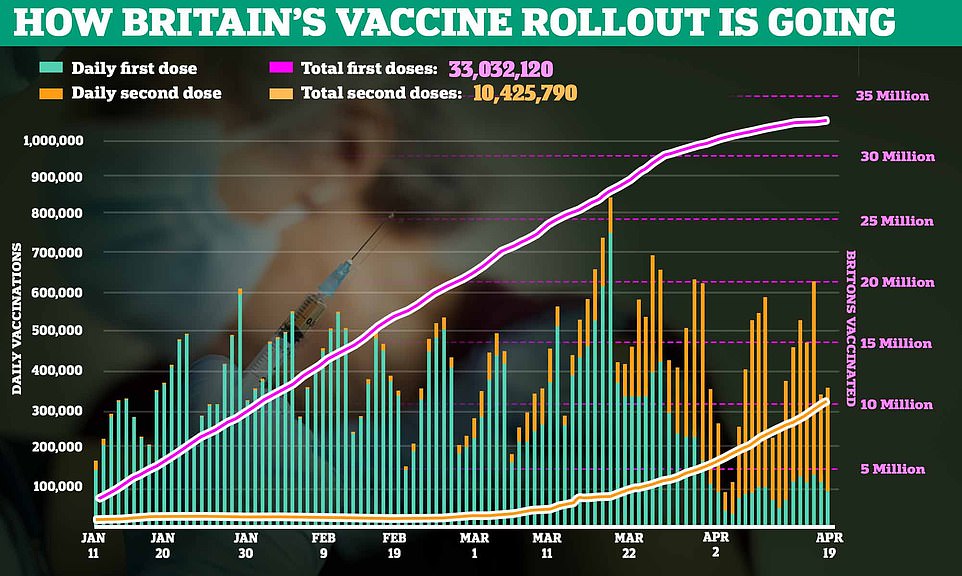 Overall, weekly death registrations from all causes rose slightly from 8,201 to 9,098, while deaths from Covid fell slightly from 400 to 379.

But experts said this was down to the bank holiday weekend falling in the week covered by the last set of figures, meaning some deaths would have been added on to today’s count.

When the ONS figures were broken down into occurrences — a more accurate way of tracking the crisis, Covid fatalities fell 35 per cent from 348 to 226.

It was the lowest weekly death toll in England and Wales since September 18 and was the equivalent of the virus making up less than one in 20 (4.2 per cent) of all deaths.

The number of deaths registered in England and Wales was below the five-year average for the fifth consecutive week, the ONS also said.

This is because the Covid crisis is continuing to shrink and the pandemic front-loaded deaths, meaning many of its victims died last Spring.

One in five British adults now have the best available protection against Covid — contributing to the plummeting death figures, with almost all of the country’s most vulnerable people now covered. 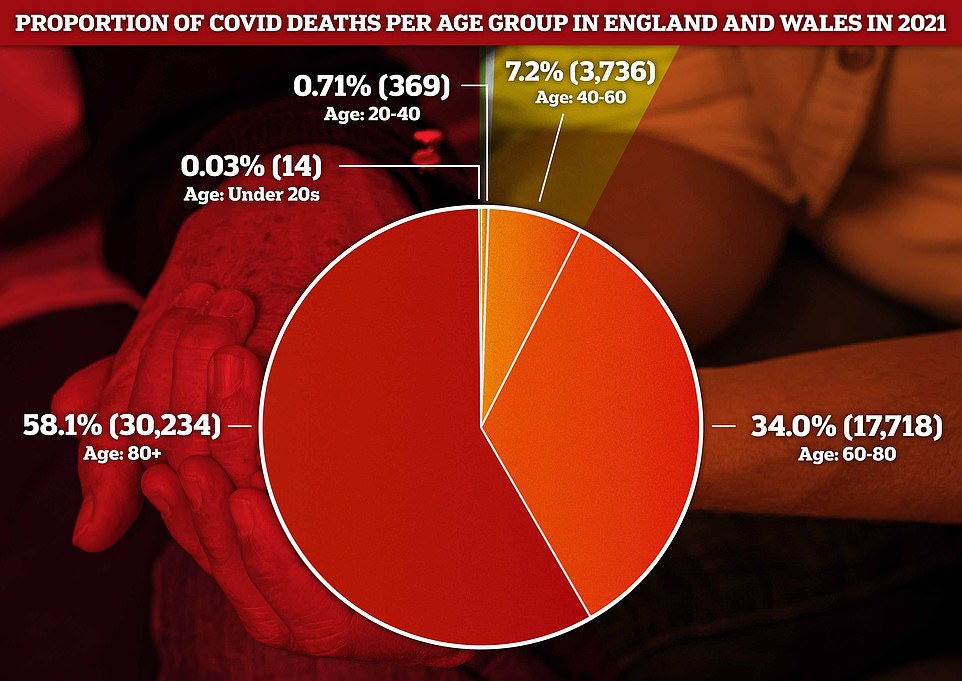 Just sixteen people under the age of 20 have died of Covid this year in England and Wales — 0.03 per cent — according to official data 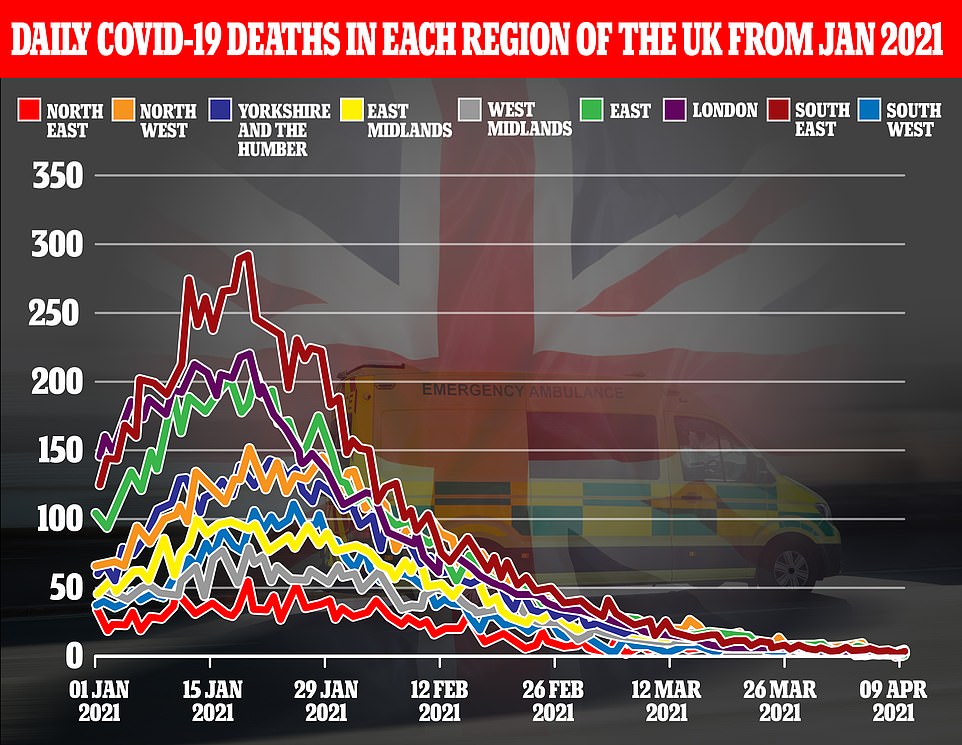 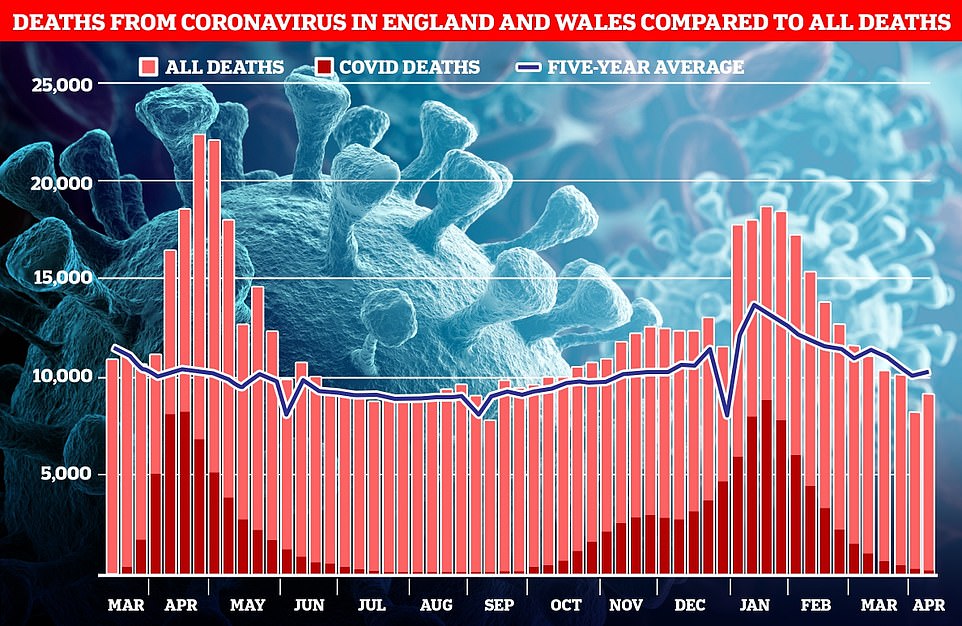 Weekly death registrations from all causes rose slightly from 8,201 to 9,098, while deaths from Covid fell slightly from 400 to 379. experts said this was down to the bank holiday weekend falling in the week covered by the last set of figures, meaning some deaths would have been added on to today’s count 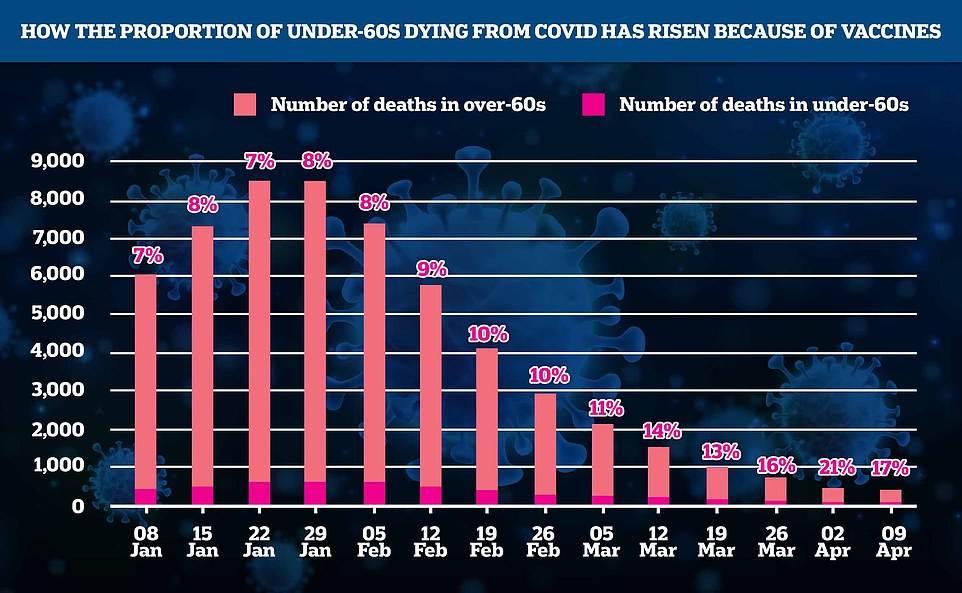 The figures suggest vaccines are working because younger people now make up a higher proportion of Covid deaths than before, from seven to eight per cent of deaths occurring in under-60s through January to 17 per cent in the most recent week

In the most recent week, deaths fell in all age groups other than 20- to 24-year-olds and 40- 44-year-olds — but the number of fatalities were too tiny to notice any actual difference.

Separate analysis showed deaths involving Covid among people aged 80 and over have fallen by nearly 100 per cent since the second-wave peak.

Boris Johnson will hold his first press conference in two weeks tonight amid growing concerns about the Indian coronavirus variant.

The Prime Minister is due to appear in Downing Street’s new briefing room at 5pm after coming under fire for taking too long to ban travel to India.

No10 only announced India was being added to the UK’s travel ‘red list’ yesterday, and the measures won’t come into effect until 4am on Friday. Thousands of people will arrive in Britain from India before then.

Labour slammed the Government for not banning arrivals immediately despite the Indian variant being under investigation by UK officials for almost three weeks.

Sir Patrick Vallance’s predecessor admitted ministers were too slow to respond to the new strain, called B.1.617, claiming the ban was ‘taken a bit too late in truth’.

Some 103 cases of the variant have been identified in the UK so far, most of which were linked to foreign travel. The PM has had to cancel a visit to India next week.

It is feared B.1.617 spreads more easily than older strains and has mutations which help it evade vaccines – but to what degree remains unclear.

Tonight’s press conference will be Mr Johnson’s first in a fortnight. He is expected to give a general update about the UK’s Covid crisis and vaccination programme.

The figures suggest vaccines are working because younger people now make up a higher proportion of Covid deaths than before, from seven to eight per cent of deaths occurring in under-60s through January to 17 per cent in the most recent week.

Regionally, daily death numbers have fallen to fewer than seven in all areas of England as of April 9. In the week ending April 8, the North East recorded the lowest death total with 12.

The North East saw zero death on April 9 for the first time since September 14.

It comes as No10 continues to face pressure to ease Covid restrictions more quickly, with more than 10million people now having had their second coronavirus vaccines.

Experts estimate the jabs have already saved 10,000 lives while the country’s three-month lockdown brought down case rates and hospital admissions.

Health Secretary Hancock said uptake of the jab so far has been ‘astonishingly high’ and that the country remains on track to offer a first jab to all adults by the end of July. It also remains on track, he said, to come out of lockdown in June.

The next step on the roadmap is set for May 17 at the earliest, when indoor gatherings will be allowed as well as large groups outdoors. Indoor entertainment venues will be able to reopen and international travel may be permitted.

As lockdown-sceptic Tory MPs continue to call for a faster road back to normality, Mr Hancock said he hoped legal requirements would be dropped but people would keep acting more cautiously than they used to.

Mark Harper, Conservative MP for the Forest of Dean and chair of the Covid Recovery Group, questioned if the UK will be ‘broadly back to normal without social distancing’ by June 21.

Matt Hancock replied in the Commons: ‘Any decisions like that would be based on the evidence and we have far more evidence now than we did when making these decisions previously.

‘I fully expect that there will be some areas of life – without the need for laws in this place – where people will behave more cautiously than previously, and the wearing of masks is one where before this pandemic wearing a mask in public in this country was extremely unusual, and I’d imagine some people will wear masks and choose to wear masks for some time to come.