President Biden, speaking to donors at a Democratic fundraiser in Los Angeles, said Ukrainian President Volodymyr Zelensky “didn’t want to hear it” when U.S. intelligence gathered information that Russia was preparing to invade.

The remarks came as the war continues into its fourth month.

“Nothing like this has happened since World War II. I know a lot of people thought I was maybe exaggerating. But I knew we had data to sustain he “was going to go in, off the border,” Biden said of Russian President Vladimir Putin.

“There was no doubt,” Biden said. “And Zelensky didn’t want to hear it.”

Although Zelensky has inspired people with his leadership during the war, his preparation for the invasion – or lack thereof – has remained a controversial issue.

Mykhailo Podoliak, an adviser to the head of Ukraine’s President’s Office, said that while the level of aggression from Russia was a shock, the country quickly rallied its military presence to fight back.

“Ukraine understood the intentions of the Russians, expected one or another aggressive scenario, prepared for it, which sharply broke the original Russian plans,” Podoliak wrote to Interfax. “I think it is pointless to blame the country, which is more than 100 days (into) a full-fledged war against a much more resourceful opponent, if key countries have failed to prevent the militaristic appetites of the Russian Federation, knowing them well.” 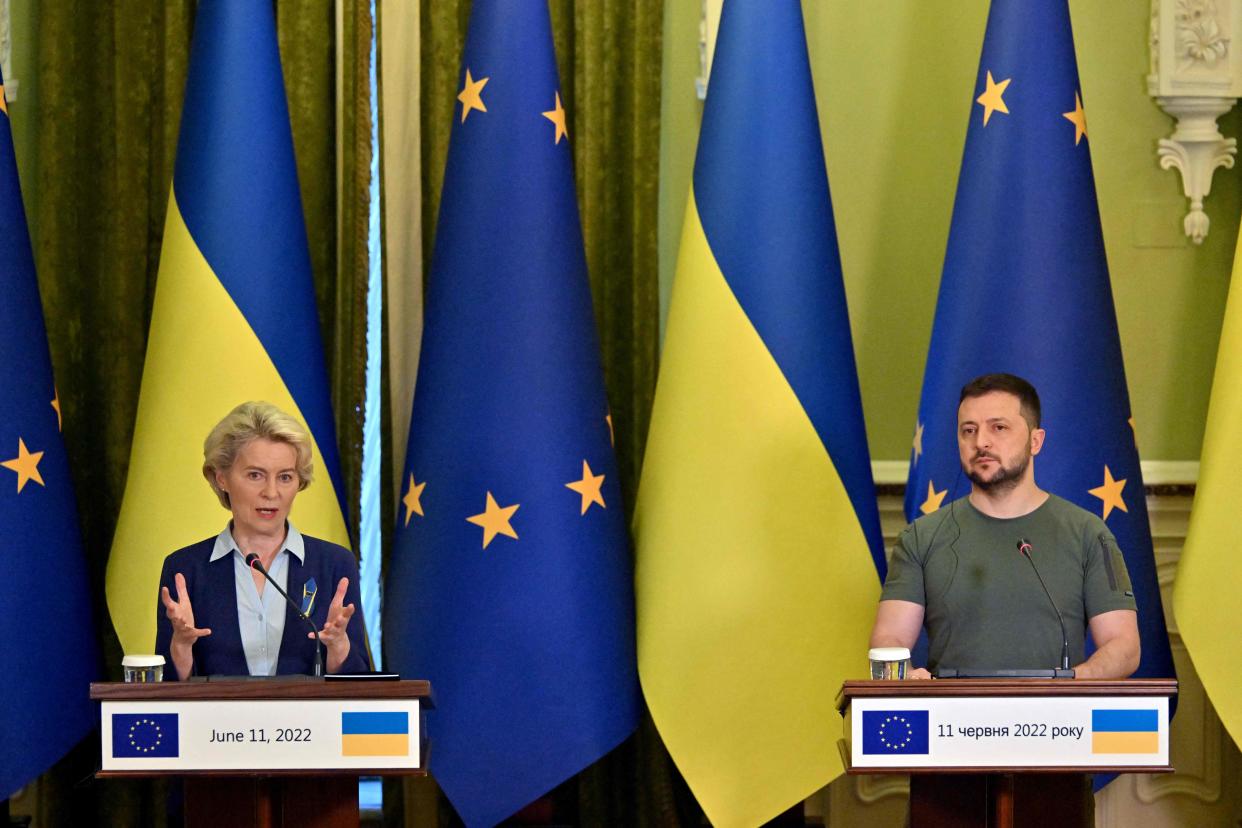 In other developments over the weekend:

— After talks with President Zelensky and other leadership, European Commission President Ursula von der Leyen said the group’s assessment of Ukraine’s application to become a member of the European Union would be finalized by “the end of next week.”

“The path is known; it is a path based on merit,” von der Leyen told press after the talks, according to European Pravda. “This is a path where I appreciate the extraordinary determination of Ukrainians in this process.”

She added that while Ukraine is currently at war and must focus on that for the time being, she expects to see efforts made by the Ukrainian government to “strengthen the rule of law” and “fight corruption.”

— An independent international commission sent by the United Nations to Ukraine to investigate war crimes committed by Russian forces arrived in the nation Saturday, according to the deputy head of Ukraine’s parliament.

“The just punishment of all who gave orders and committed atrocities against our citizens must be irreversible,” Olena Kondratyuk, deputy head of Ukraine’s parliament, wrote on Facebook. “We expect that the UN Commission will investigate all these crimes and give them their unanimous assessment.”

Kondratyuk added that Ukraine’s parliament would “fully contribute” to the commission’s efforts.

— In the southern port city Mariupol, which fell in May, Russian forces have renamed the city’s once vibrant “Freedom Square” after a previous Russian leader.

“The madness here has remained with Russia,” Petro Andryushchenko, an aide to Mariupol’s mayor, wrote on Telegram Saturday. “The occupants changed Freedom Square in Mariupol into Lenin Square and raised their tricolor over it.

“What symbolism,” Andryushchenko continued. “A tricolor against the background of demolished burned buildings on Lenin Square.”

— Ukrainian and British officials warned that Russian forces are relying on weapons with the potential to cause mass casualties as they try to make headway in capturing eastern Ukraine and as fierce fighting depletes resources on both sides.

Russian bombers have likely been launching heavy 1960s-era anti-ship missiles in Ukraine, the U.K. Defense Ministry said. The Kh-22 missiles were primarily designed to destroy aircraft carriers using a nuclear warhead. When used in ground attacks with conventional warheads, they “are highly inaccurate and therefore can cause severe collateral damage and casualties,” the ministry said.