A burst pipe in the ceiling of Atlanta's State Farm Arena, where Fulton County election officials had set up their vote-counting command centre in recent months, was perhaps the easiest of the challenges the staff faced in this singular year.

Water splattering on the floor halted counting for two hours on election day, but it didn't damage any ballots. And it was nothing compared to the task of processing nearly 150,000 mail ballots, the unfounded accusations of fraud, the physical threats and the online harassment – and the distinctly racial overtones of mostly white protesters outside the building hurling unfounded accusations of wrongdoing as a largely black staff of election officials inside methodically counted ballots. 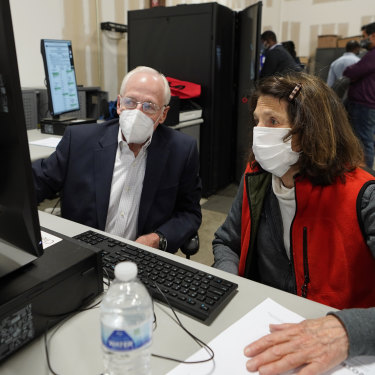 In the background was an anxious nation desperate to know who the next US president would be, with all eyes trained on Georgia and a handful of other states like no American election in history.

"I knew there was going to be more scrutiny here," said Fulton County elections director Richard Barron. "I've learned to expect it, and you just deal with the pressure as it comes."

This year aimed a bright light on the way elections are run in the US – and put unfathomable demands on the people who run them. When the coronavirus pandemic exploded in March, it was instantly apparent that their already complicated task would become immensely more difficult: maintaining rosters of poll workers, providing protective equipment, preparing for a historic burst of mail voting and then counting all the ballots.

Layered over all of it was an incessant drumbeat of attacks on voting from President Donald Trump, who for months cast doubt on the integrity of the election.

The President's onslaught only escalated once the polls had closed and the laborious vote count ticked on. At one point, he seized on the water leak in Atlanta as evidence of something sinister.

"In Georgia, a pipe burst at a faraway location, totally unrelated to the location of what was happening, and they stopped counting for four hours, and a lot of things happened," Trump said at the White House on Thursday in the US.

Inside the arena in Atlanta and thousands of centres like it around the country, election officials toiled on. Live streams beamed out videos of the painstaking process. In many counties, workers kept at it all night.

In the end, teams in large cities and tiny counties alike delivered a historic result: a record number of ballots counted with few glitches and – despite the President's claims – no evidence of widespread fraud.

Calm before the storm

Long before the northern autumn, election officials were quietly preparing for what was to come.

"We knew we would be under a microscope from day one," said Peter Antonacci, the election supervisor in Florida's Broward County, where disputes over signatures on mail ballots in 2018 led to recounts and a slew of lawsuits.

Antonacci instituted a number of reforms after that election, including a better system to organise ballots. He filled 17 vacant positions and blasted out reminders to those voting by mail to sign the back of the envelope. 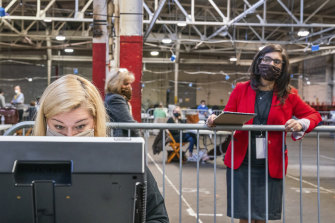 In Pennsylvania's Allegheny County, the non-stop phone calls from voters with questions about mail ballots began in August. Officials were soon working through the weekends and tapped staff from every department – including property assessments – to help with the deluge.

Many officials in the country said the week would have proceeded immeasurably worse were it not for the private grants that flooded into election offices, including more than $400 million donated by Facebook founder Mark Zuckerberg and his wife, Priscilla Chan.

The funding was evident inside the Pennsylvania Convention Center, where an enormous staff of 150 yellow-vested workers counted Philadelphia's mail-in ballots in a cavernous room outfitted with high-speed scanners and scales so sensitive they could detect if the interior security envelope was missing – a disqualifying omission known as a "naked ballot". Philadelphia alone received $10 million in private grant funds.

And in Arizona's Maricopa County, officials posted signs in English and Spanish with QR codes of their live stream to make it easy for protesters to watch the count in real time on their mobile phones.

The intensity of the hostility over the past week was nonetheless startling.

One of the more vivid examples came in video footage from the TCF Center in downtown Detroit, where a surge of angry Trump supporters, hoping to serve as election observers, tried to pile into the facility. 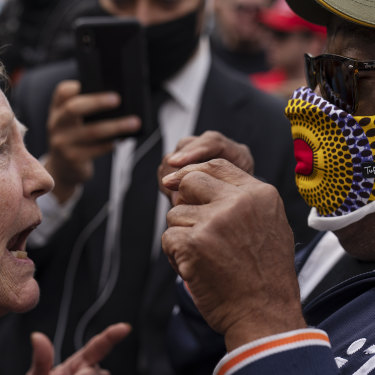 A Trump support, on the left, argued with a counter protestor outside Detroit's TCF centre, where votes were being counted. Credit:AP

Egged on by Trump's false claims of fraud on Twitter as Democratic nominee Joe Biden overtook him in state totals, the crowd materialised after a Facebook post from Stand Up Michigan, a conservative group opposed to coronavirus restrictions, urged supporters to show up at the counting facility "to help with challenging results".

It was no calmer for election workers inside the room. Julie Moroney, a third-year law student at the University of Michigan and a nonpartisan poll challenger on hand on behalf of the Lawyers Committee for Civil Rights Under Law, said she saw a man urging a Republican poll watcher to "challenge every vote".

GOP officials in Michigan did not respond to requests for comment. The state GOP falsely asserted in a news release on Wednesday in the US that Detroit election officials had "shut out" Republican poll watchers.

At some points, Moroney said, poll workers grew visibly frustrated. They stood up and clapped when unruly challengers were tossed from the room.

"I felt for those workers. I could only imagine what it would feel like, trying to do your job, having these people hover and sneer at you and yell at you and make something so simple, something that's supposed to be so patriotic, so hard."

In Las Vegas, Clark County election officials dealt with so many hecklers and protesters that they increased security at their counting centre. Employees were encouraged not to leave the building late at night by themselves. Registrar Joe Gloria said his own wife and mother were worried about his safety.

But he insisted that the count would go on.

In some states, election officials objected publicly to the barrage of unfounded accusations of wrongdoing. A Republican city clerk in Rochester Hills, Michigan, published a video on Twitter on Friday in the US disputing claims of irregularities by Republican National Committee Chairwoman Ronna McDaniel.

McDaniel alleged that officials had "found 2000 ballots that had been given to Democrats that were Republican ballots." Tina Barton, the clerk, called McDaniel's claim "categorically false" in a video that has been retweeted more than 10,000 times. At issue, she said later in an interview, was a technical discrepancy that created duplicate results when absentee ballots were scanned. The error was fixed immediately and was a "far cry" from what McDaniel had described, Barton said.

A surge of mistrust was evident across the country.

With hundreds of Trump supporters massed outside the ballot-counting centre in Arizona's largest county, many of them promoting unfounded rumors, election workers encouraged people to watch the process themselves on a live stream.

"The public needs to trust in the election process," said Maricopa County elections department spokeswoman Megan Gilbertson. "And we really believe that security and transparency are the way to ensure that trust is held."

The live stream was not new; Arizona state law requires it at ballot tabulation facilities. Maricopa County goes "above and beyond," Gilbertson said, providing 24-hour access to cameras for its ballot tabulation center, mailroom, signature verification room and ballot-processing area.

Rumors continued unabated. Officials spent much of the week battling unsubstantiated allegations that the use of Sharpie markers to fill out ballots had invalidated large numbers of GOP votes. The live feed did not appease the accusers.

"Count the votes!" people roared outside the counting centre in Phoenix on Friday in the US.

Susan Smiley Schramm, a Democratic election observer in Phoenix who partnered with a Republican to review hard-to-decipher ballots, wondered aloud as she left her shift on Friday night in the US about the sweaty man yelling at the top of his lungs into a megaphone. It was Alex Jones, the conspiracy theorist known for claiming that the Sandy Hook mass shooting of primary school children was a hoax.

Smiley Schramm said she believes Jones represents the very fringe of America rather than her community. "He's not Phoenix," she said.

Still, she said, it only made her job feel more vital. "When I really felt not the pressure – not the burden, but the responsibility of what we're doing – was when I heard these people talking about Sharpies and chanting 'Count my vote'," she said.

In other communities, the pandemic contributed to the strain. In Fulton County, the elections staff had already mourned the death of Beverly Walker, 62, a grandmother and veteran registration officer who died in April of complications from the coronavirus. Then, just weeks before election day, a new outbreak "ripped through the warehouse in days," infecting nearly half the staff, Barron said.

Some of the workers who tested positive in October and have since recovered came back to work last week to help contend with the crush of absentee votes.

Then, as Biden inched closer to overtaking Trump in Georgia, Fulton County became a magnet for baseless accusations by the President and his supporters.

One such accusation stemmed from the live stream video taken inside State Farm Arena that spread rapidly through conservative social media. In it, a poll worker can be seen crumpling a piece of paper while a narrator accuses him of throwing away a ballot.

In a Friday (US time) news conference, Barron said he had spoken to the worker, reviewed the video and concluded "undeniably" that he was not discarding a ballot. He was crumpling a piece of paper much smaller than the county's ballots while working at a station that didn't even involve opening ballot envelopes.

That didn't stop critics from posting the worker's personal information online, including his address and license plate number. He has received threats and has had to move out of his home, Barron said.

"He is currently in hiding," Barron said. "Simply for wanting to be an election worker."

Understand the election result and its aftermath with expert analysis from US correspondent Matthew Knott. Sign up to The Sydney Morning Herald‘s newsletter here, The Age‘s here, Brisbane Times‘ here and WAtoday‘s here.