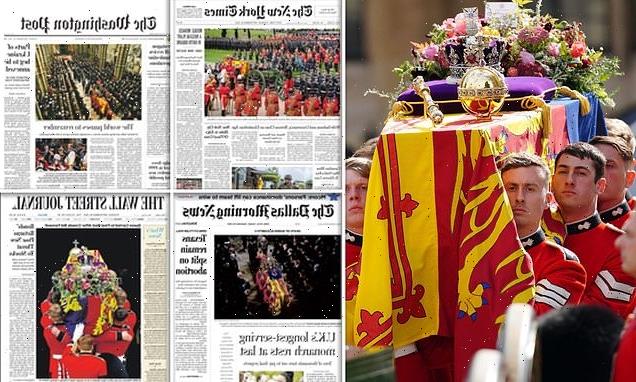 ‘The end of the Elizabethan era’: US newspapers from coast to coast mark the funeral of the Queen on their front pages after historic ceremony

Newspapers across the country gave their front pages over to Queen Elizabeth II’s historic state funeral on Monday, following 10 days of national mourning for the lauded monarch who ruled over the United Kingdom for 70 glorious years.

From coast to coast, publications such as The New York Times, The Wall Street Journal, and the Chicago Tribune used their covers to pay tribute to the stately ceremony at Buckingham Palace, as the world woke up to grieve the end of the second Elizabethan Era Tuesday.

A combination of encapsulating images and poignant headlines graced newsprint across the globe, as citizens the day prior tuned in at large to a live feed of the procession – a broadcast that drew an estimated viewership of 4.1 billion in more than 200 countries, making it the most viewed program of all time.

Despite being an ocean away, America accounted for a great deal of that engrossment – with that attentiveness further on display the next day with the prominent print coverage.

Headlines such as ‘A Final Goodbye’ and ‘An Outpouring of Affection’ could be seen on newsstand shelves from New York to California, accompanied with pictures that showed the pomp and pageantry of the procession.

The funeral was attended by President Joe Biden and several other world leaders and royals, there to pay respects.

The public also watched in solemn diligence as the Queen’s coffin was lowered into the vault where her beloved Prince Philip lies – signifying that her 70-year service as sovereign had come to a ceremonious end.

It was the first state funeral for a monarch in seven decades, and newspapers across the pond rightly paid homage, releasing special and commemorative editions to mark the historic occasion.

Photo spreads on the papers’ covers captured several moments of the state service – attended by roughly 2,000 world leaders, royal family members, representatives from charities – as well as pallbearer’s herculean effort to lift Her Majesty’s casket and transport it throughout the day.

The day was declared a national holiday in Britain and was further observed by mourners worldwide, who too felt the magnitude of the event.

The funeral was the first time cameras were allowed inside the funeral of a monarch, with coverage available both on TV and several news sites globally.

American newspapers, meanwhile, took advantage of this recent advent, offering full-length features and spreads dedicated to the iconic royal, who was 96 when she passed on September 8. 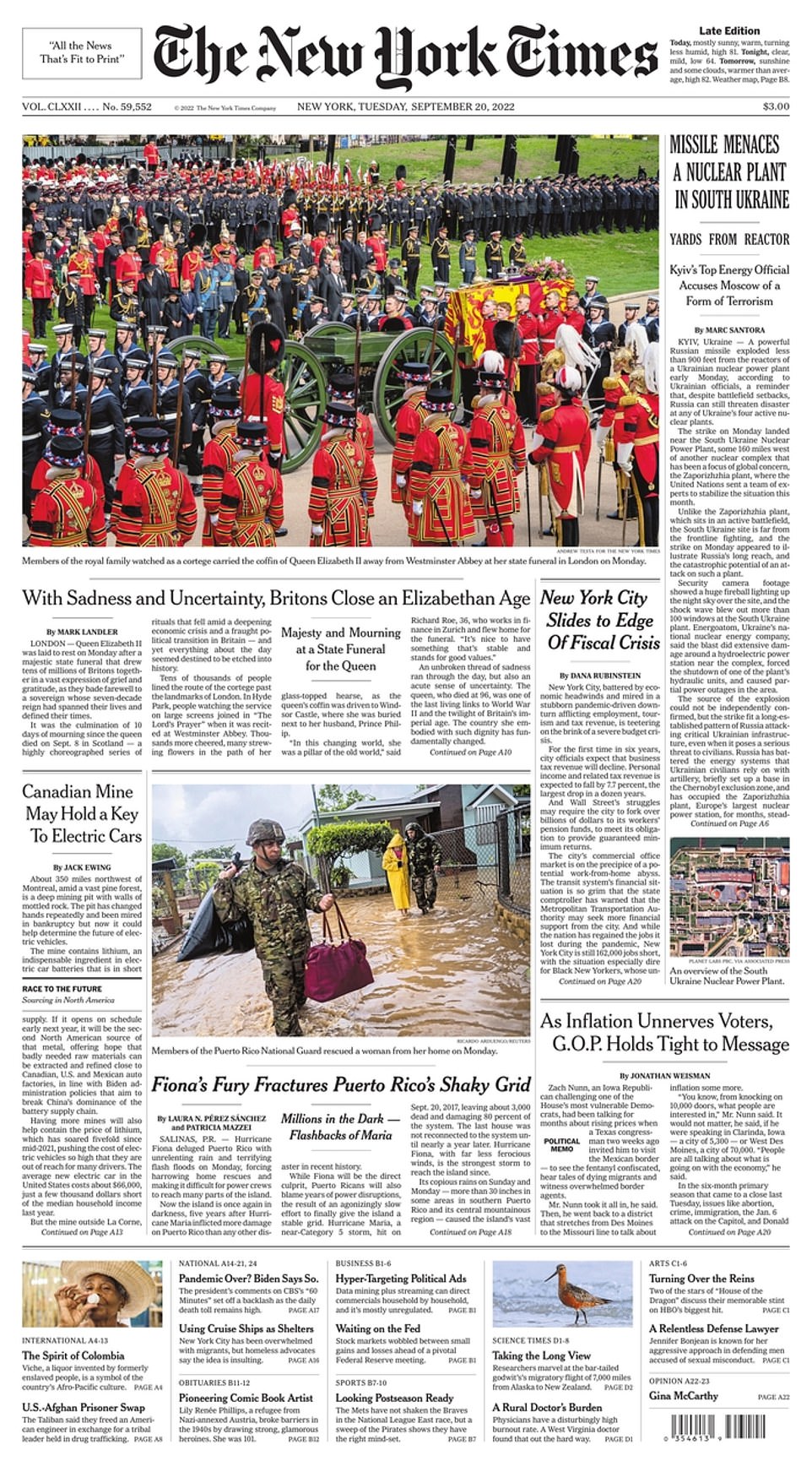 The New York Time’s front page, titled ‘With Sadness and Uncertainty, Britons close an Elizabethan Age,’ features a prominent image of the Queen’s procession, as pallbearers carried her coffin from Westminster Hall to St George’s Chapel in Windsor 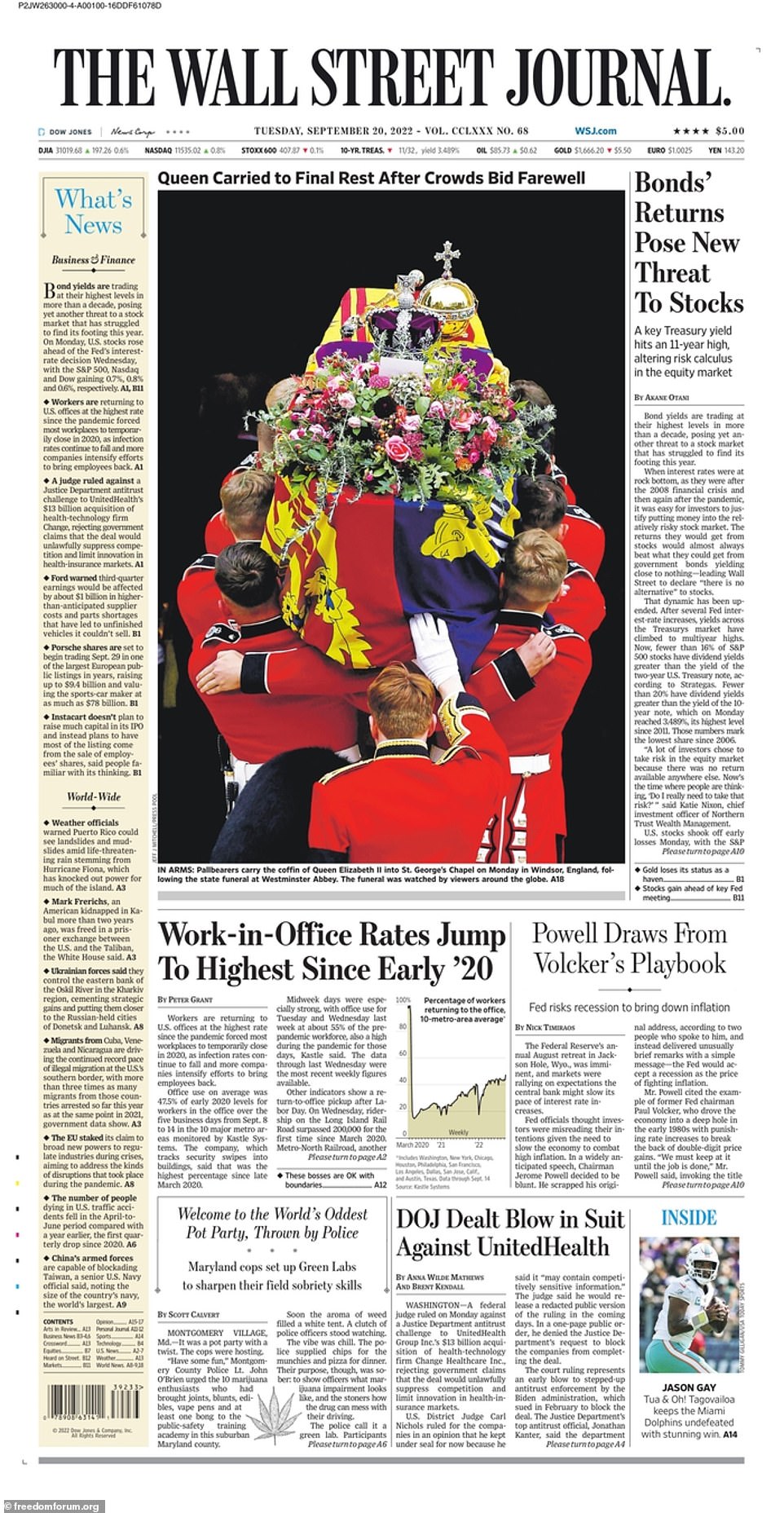 The Wall Street Journal’s main image, meanwhile, displays the bearer party taking the Queen’s coffin up the steps into the darkened entrance of the George VI Memorial Chapel at Windsor Castle, where she was laid to rest beside her beloved Philip

The Chicago Tribune chose a similar image in a poster front page for its tribute edition, displaying the floral and royal regalia on top of the coffin. A subdued sub-headline reads ‘Pageantry, solemnity mark funeral for beloved monarch,’ and features a smaller image of mourners in Hyde Park watching one of many outdoor broadcasts of the funeral that aired across the UK 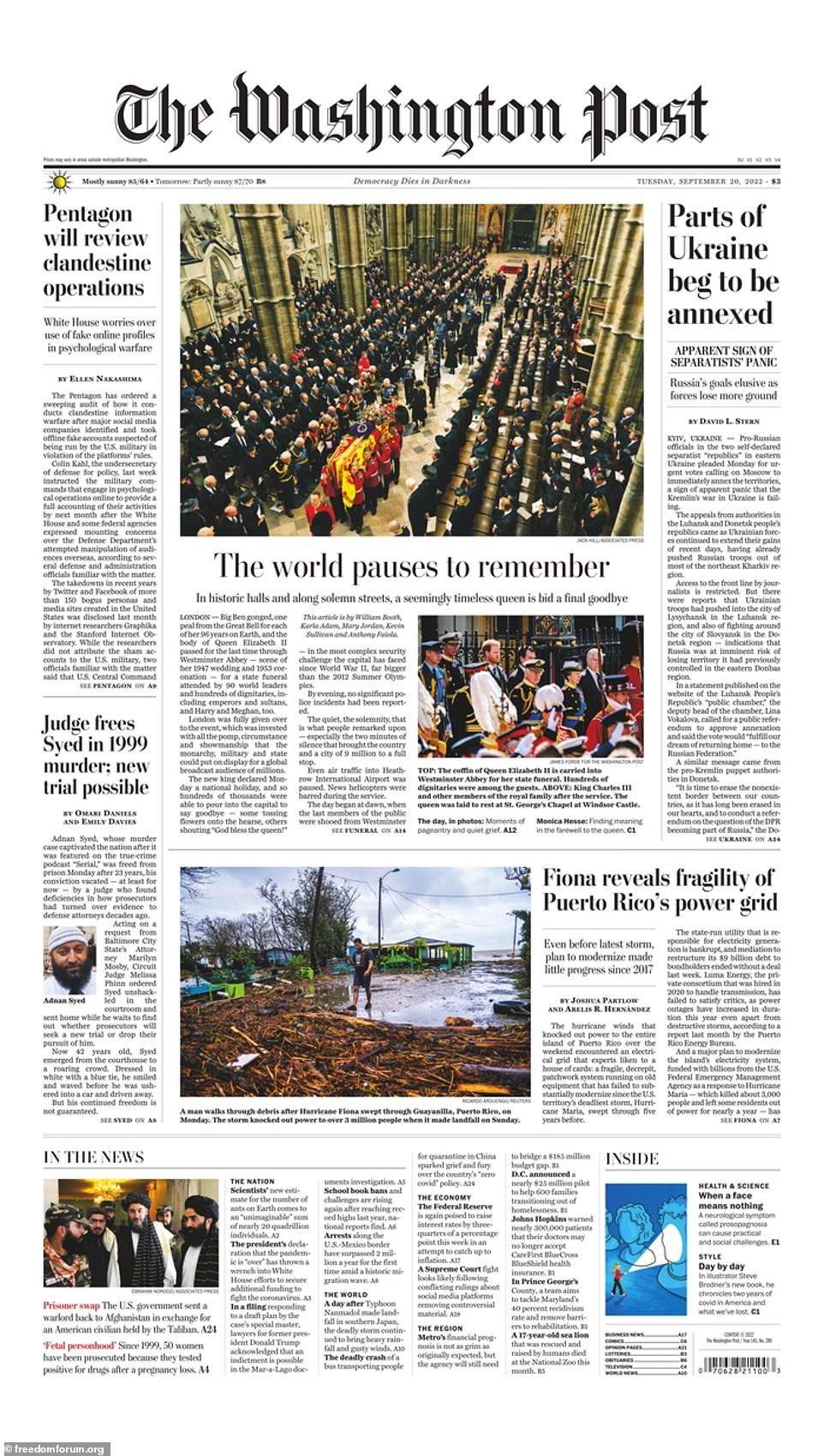 The Washington Post elected to use an image of pallbearers carrying the Queen’s ornate coffin through Westminster Abbey, with the stirring headline: ‘The World Pauses to Remember’ 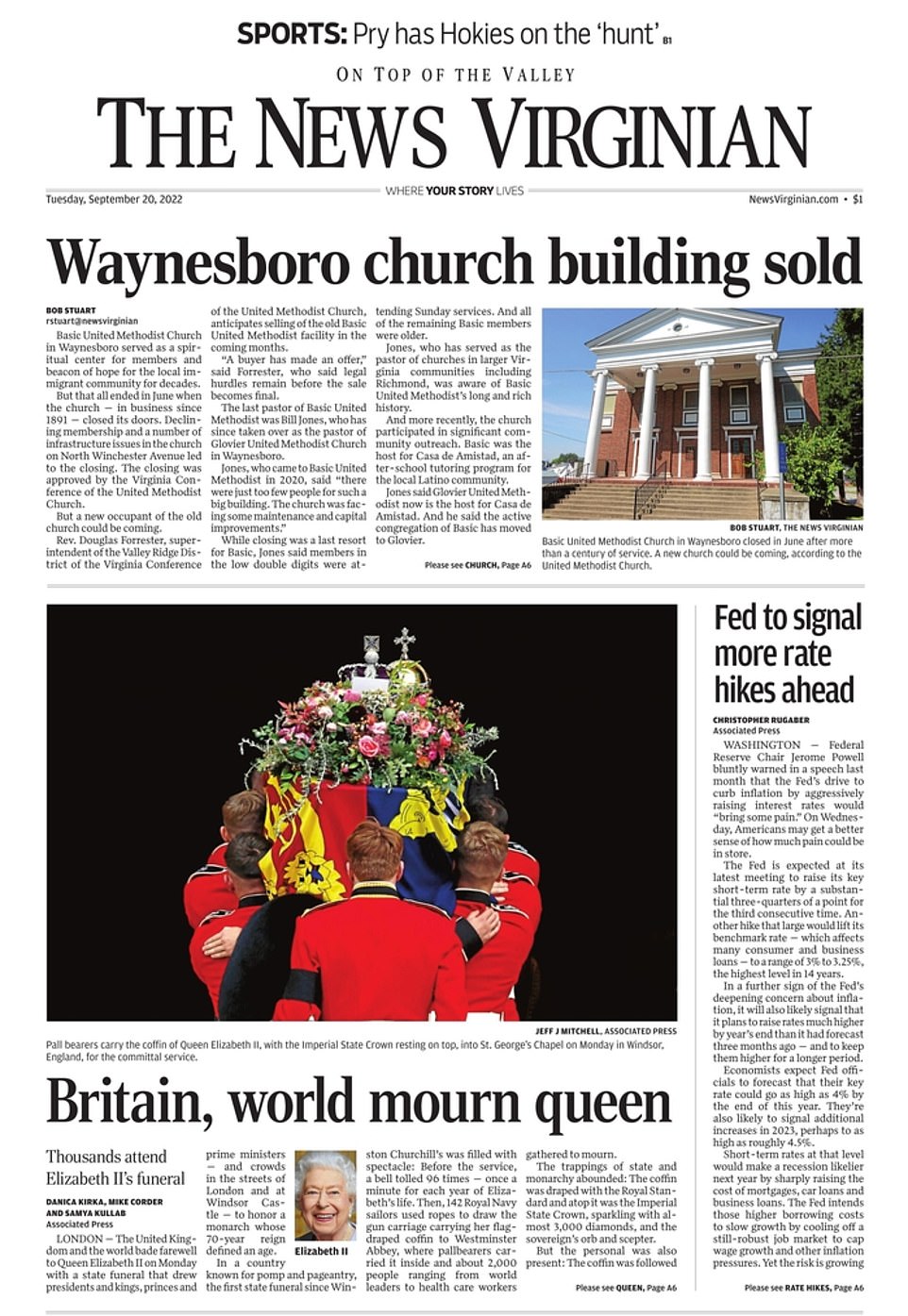 The News Virginian chose a similar image to the Journal and Tribune, with a headline that remarked on how to the world stopped in its tracks to observe the historic ceremony 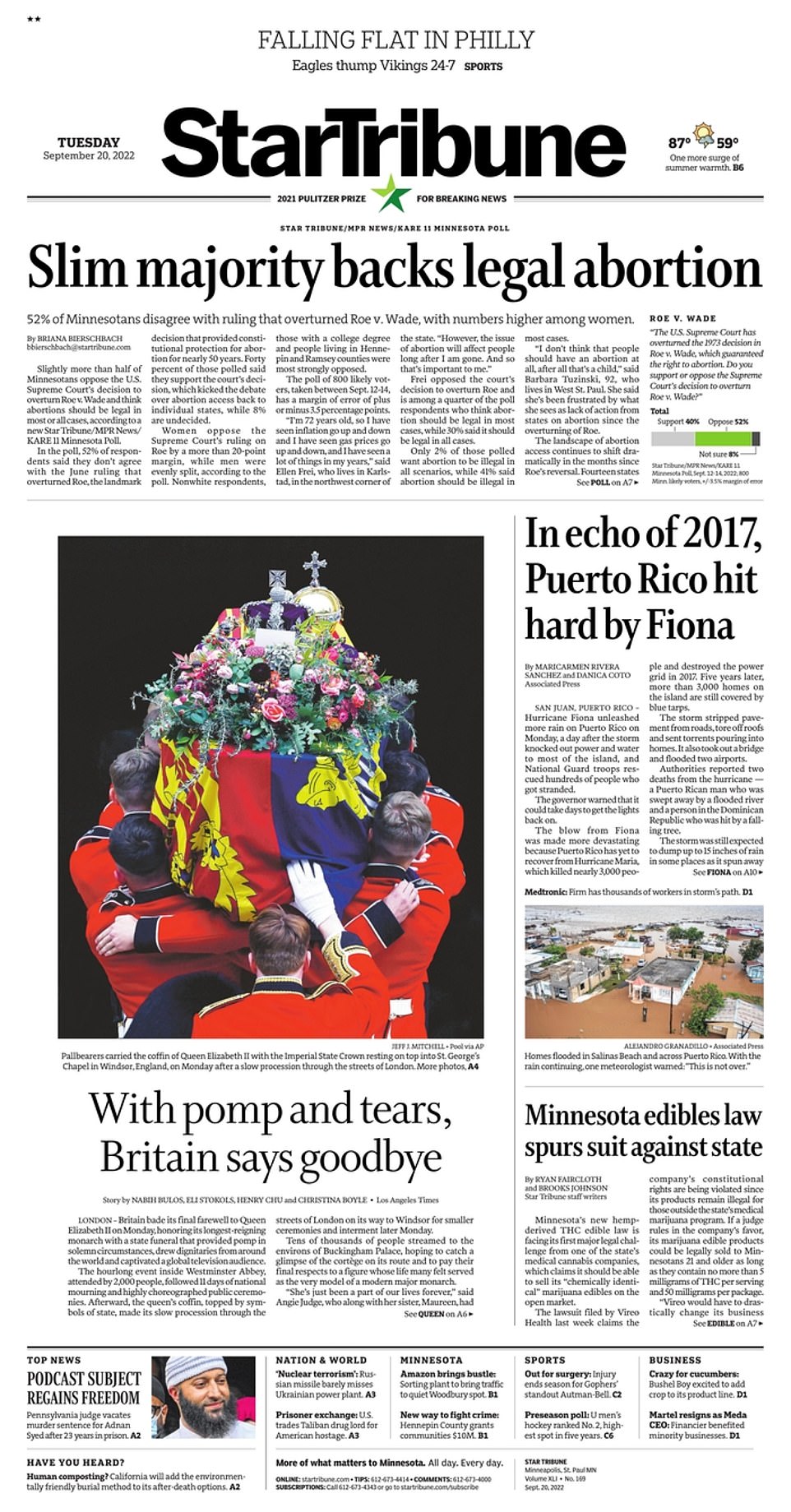 Minnesota’s The Star Tribune also used the close-up on the pallbearers, with a headline that pointed to the solemnity the surrounded Elizabeth’s state funeral, which was held on Monday ten days after the Queen’s passing 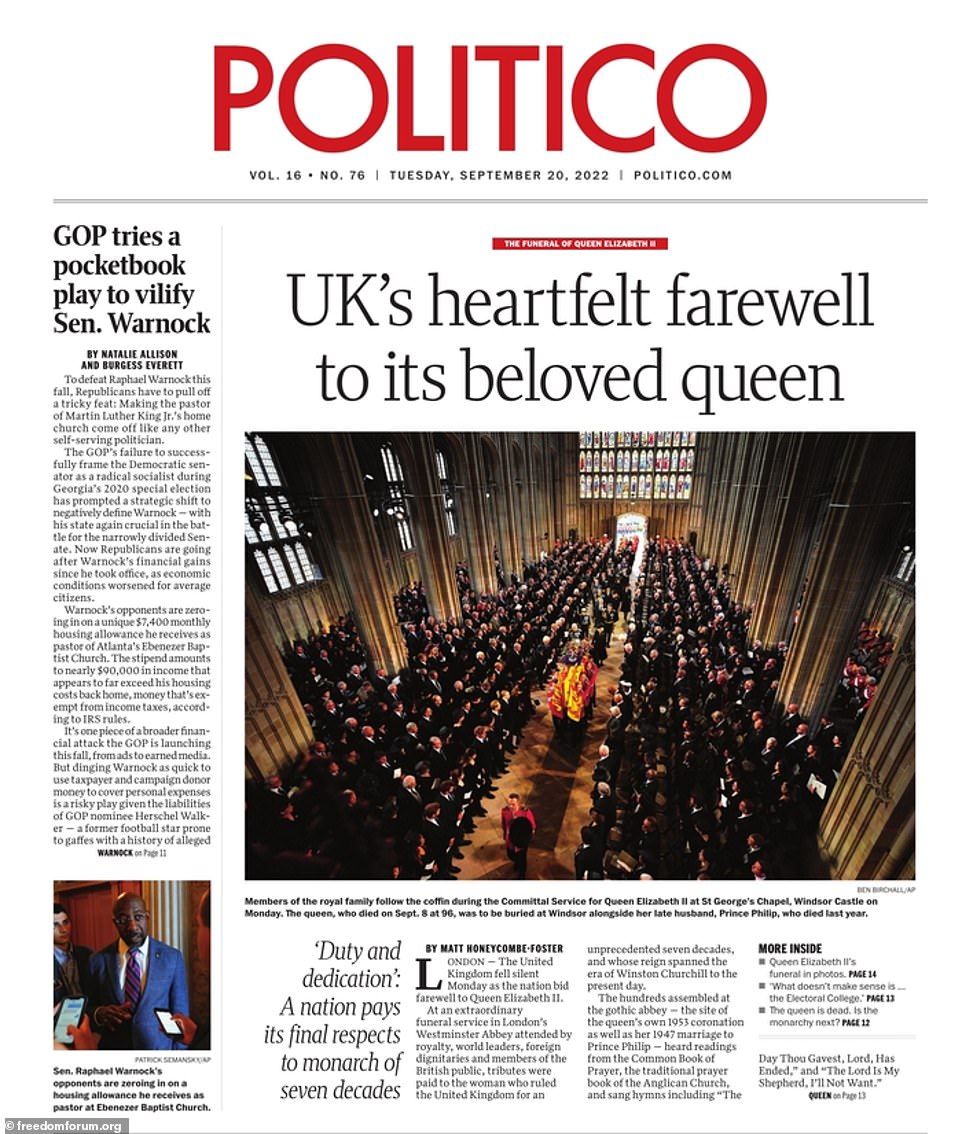 Political magazine Politico dedicated most of its first page to coverage of the funeral, again using an image of pallbearers carrying the Queen’s coffin through Westminster Abbey. The headline reads: ‘UK’s heartfelt farewell to its beloved queen’ 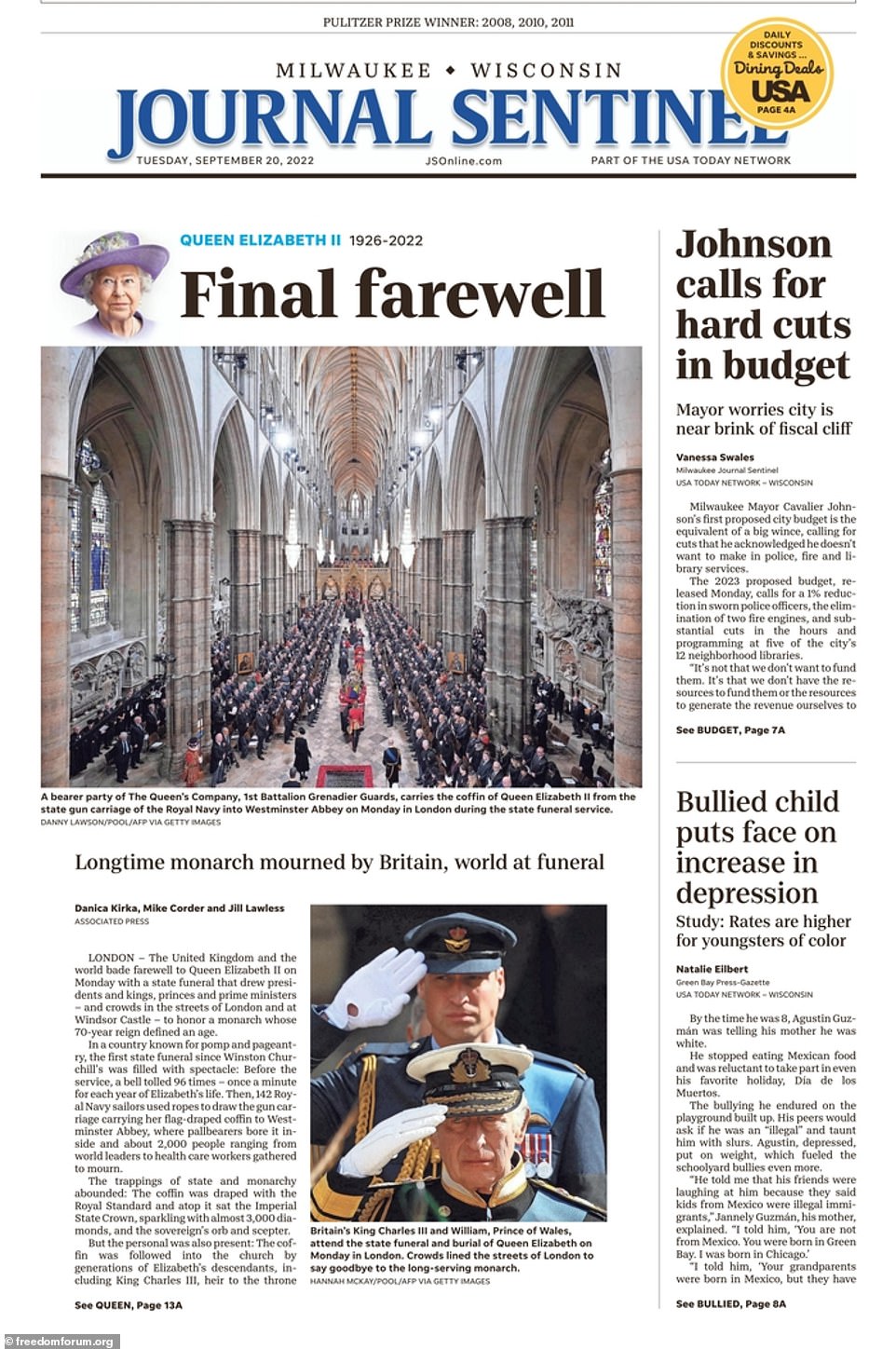 The Milwaukee-Wisconsin Journal Sentinel used most of its cover to bid farewell to the Queen, using an image of her mourning son and successor King Charles, as well as his his son William, standing at salute in military garb as the procession passes outside on the streets of London, and a pulled back image of pallbearers with her coffin inside Westminster Abbey 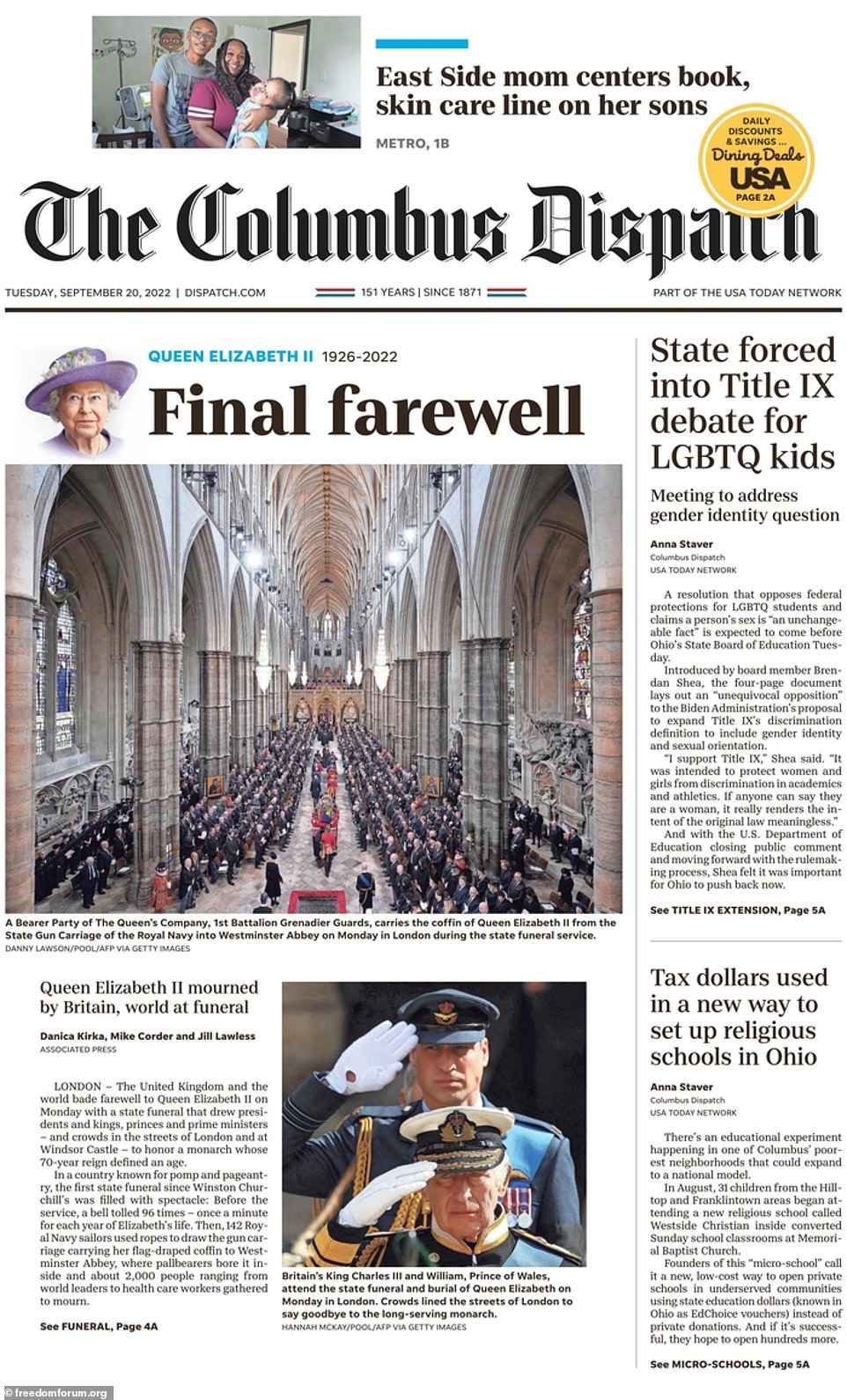 The Columbus Dispatch in Ohio elected to use the same set of images as the Journal Sentinel, as well as the same headline, ‘Final Farewell’ – accompanied with a photo of the late Elizabeth II and the years she lived 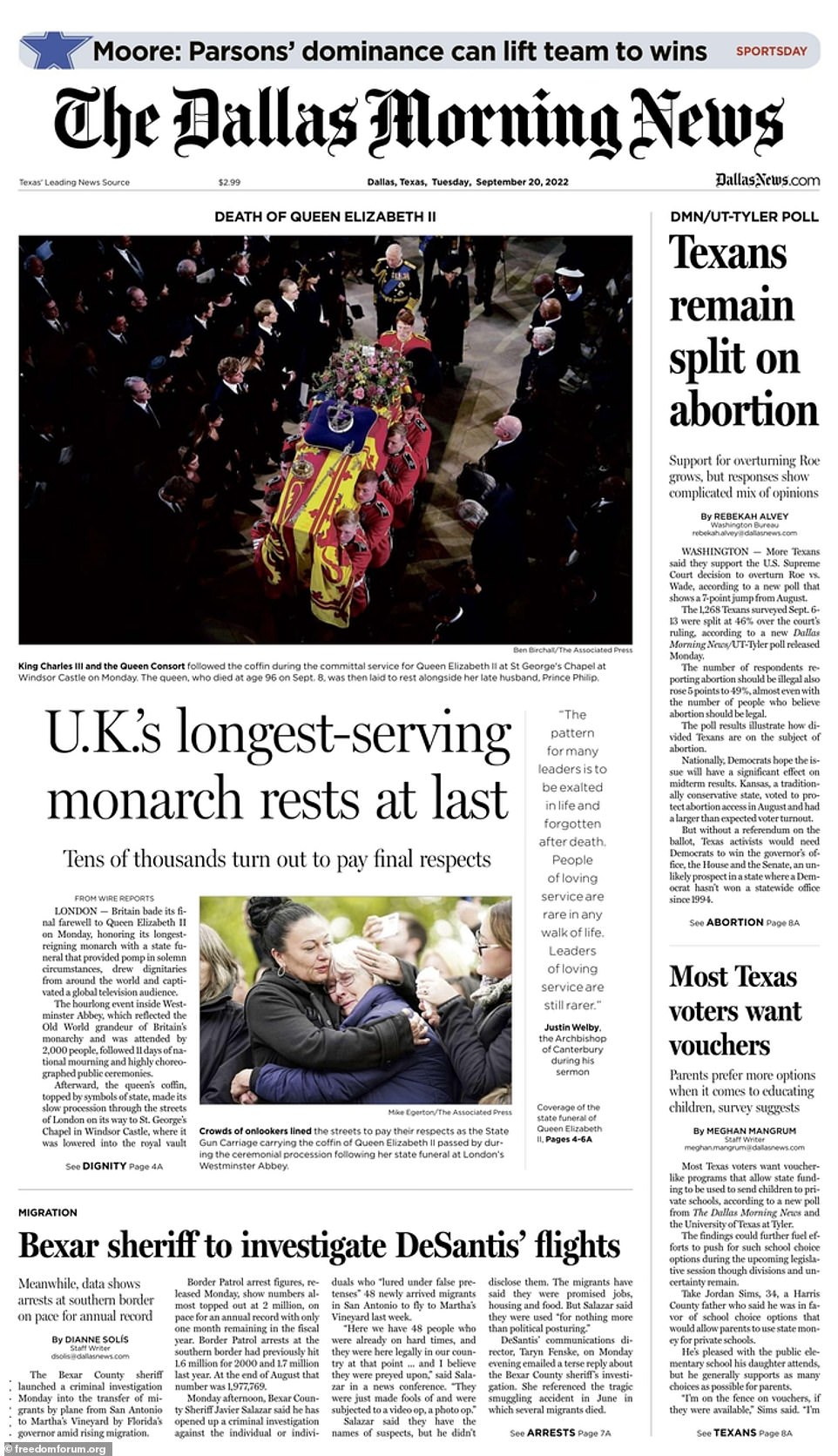 The Dallas Morning News also decided to use most of its front page to cover the funeral, with photos that depicted some of the tens of thousands of mourners who descended on Westminster Abbey to see the Queen one last time, as well as an image of the staunch pallbearers who dutifully carried the heavy casket for hours before the final burial 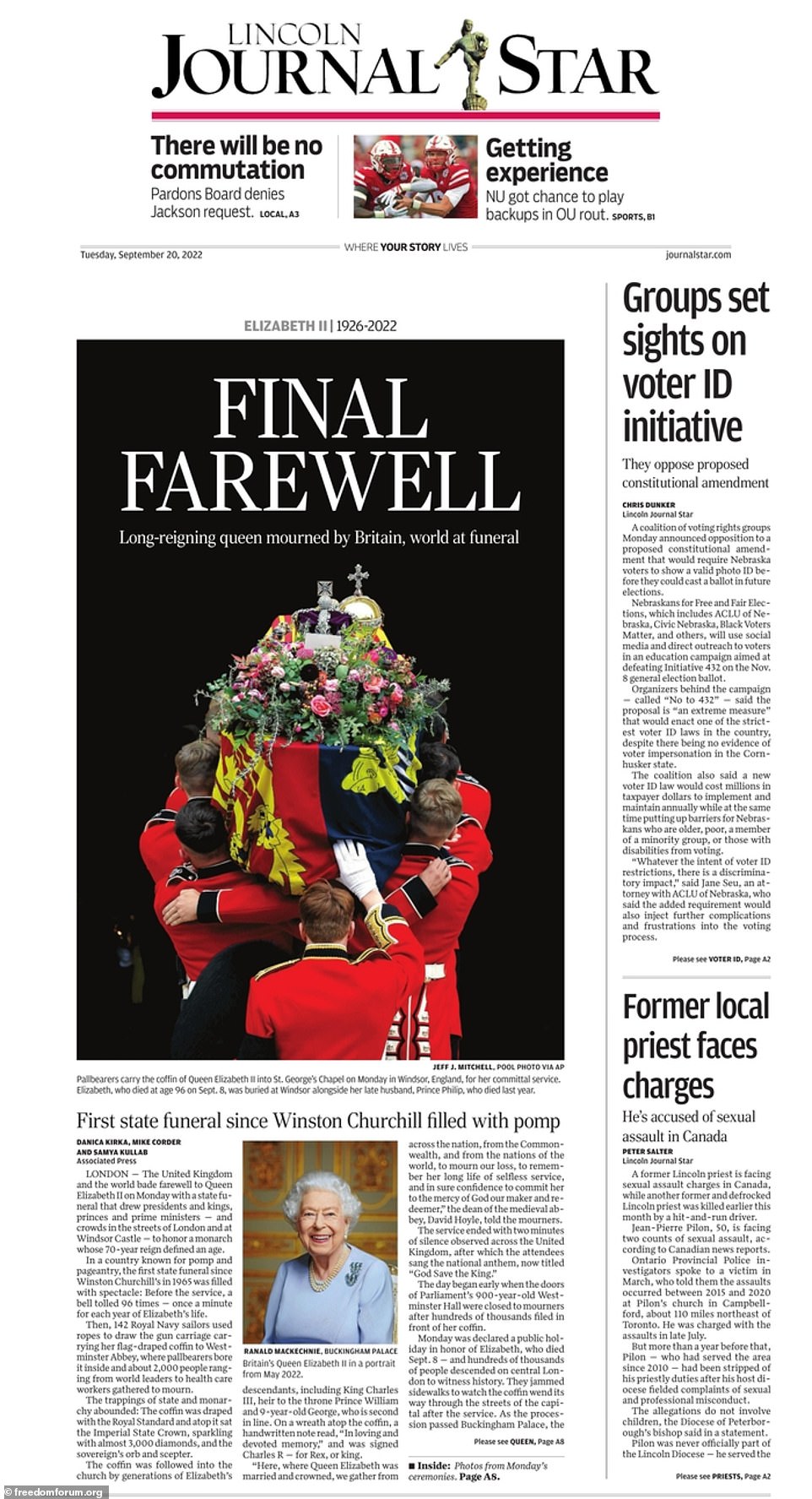 The magnitude of the monarch’s state funeral was not lost on the American Midwest, with the Lincoln Journal Star in Nebraska also publishing a touching tribute to the royal on their front page 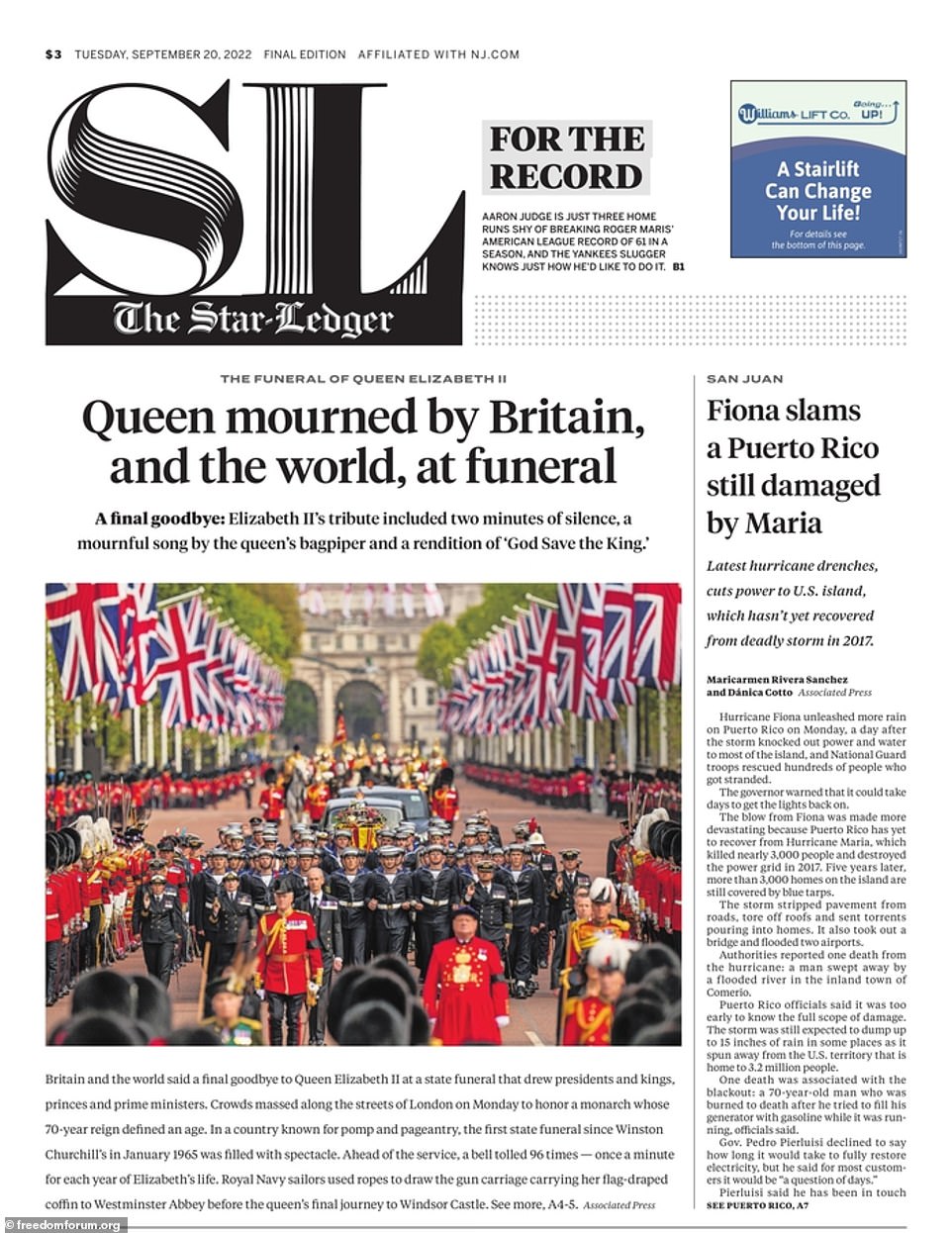 New Jersey’s Star Ledger, meanwhile, which is read by hundreds of thousands of people in the state as well as nearby New York, elected to use a frontal image of the procession – the first state funeral since Winston Churchill’s in January 1965 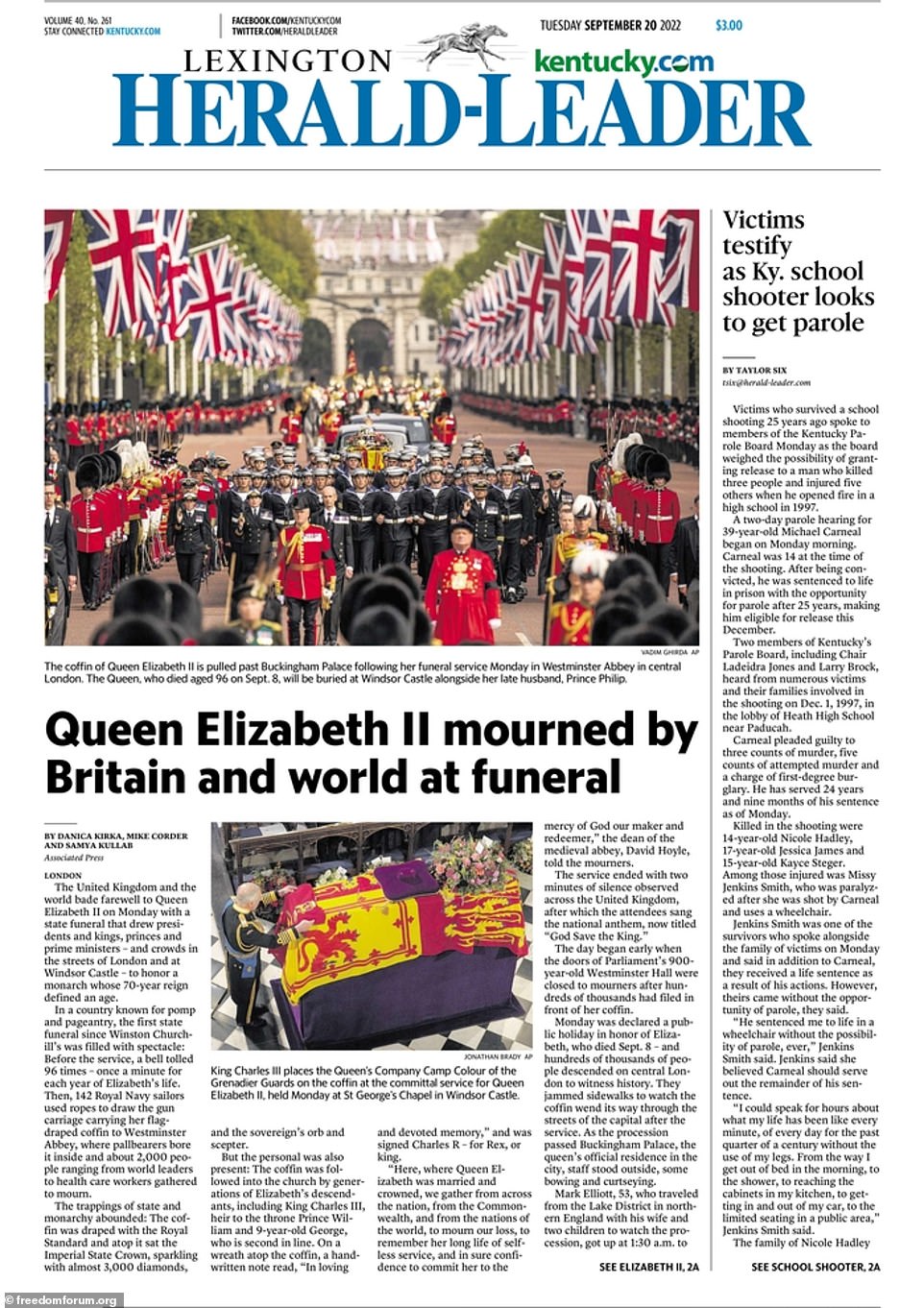 Down south in Kentucky, The Lexington Herald-Leader also used the frontal image of the parade of servicemen carrying the Queen’s coffin, as well a photo of King Charles laying a wreath on his mother’s casket 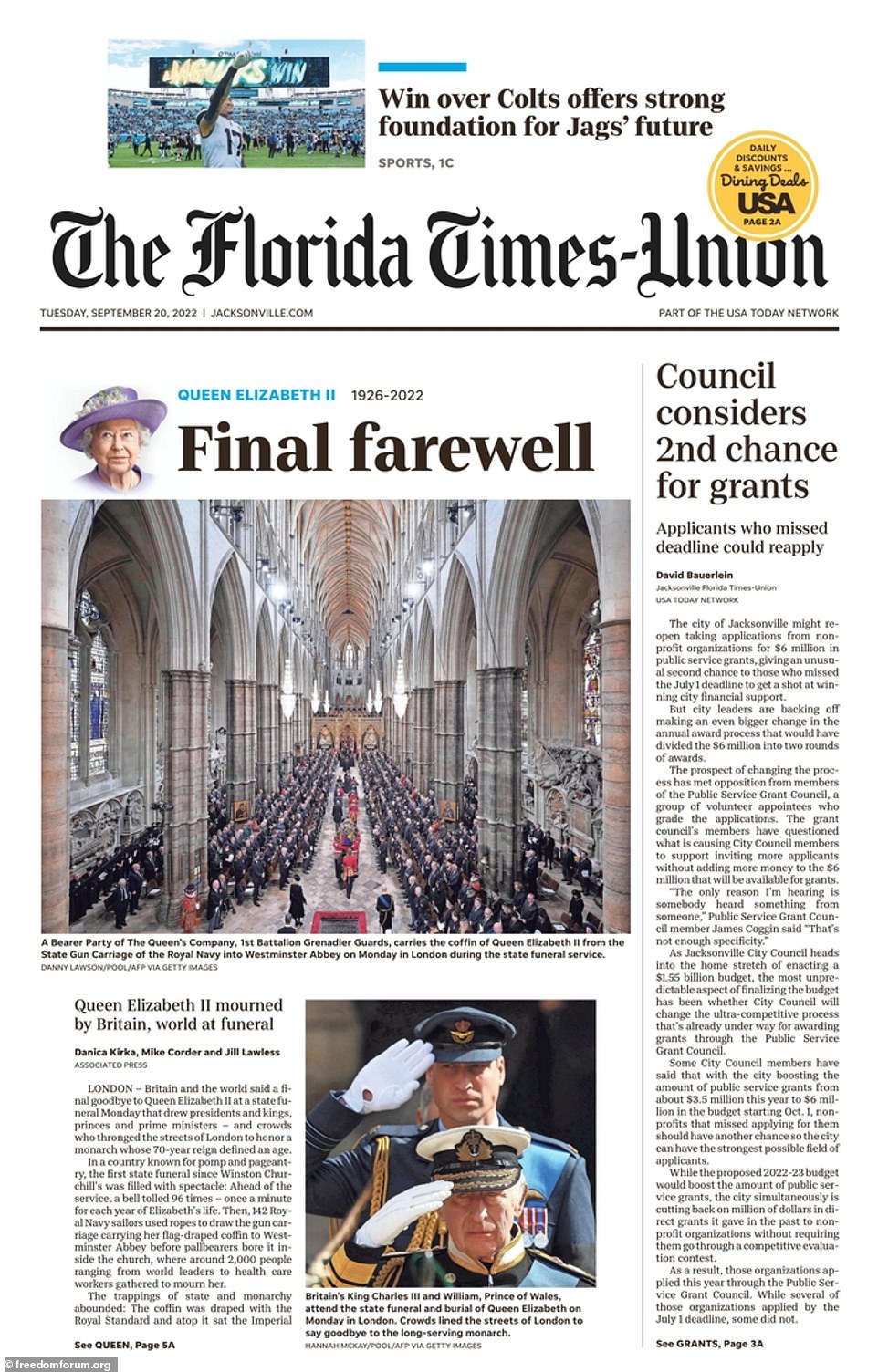 The Florida Times Union, the oldest publication in the Sunshine State, also dedicated most of its front page to the funeral 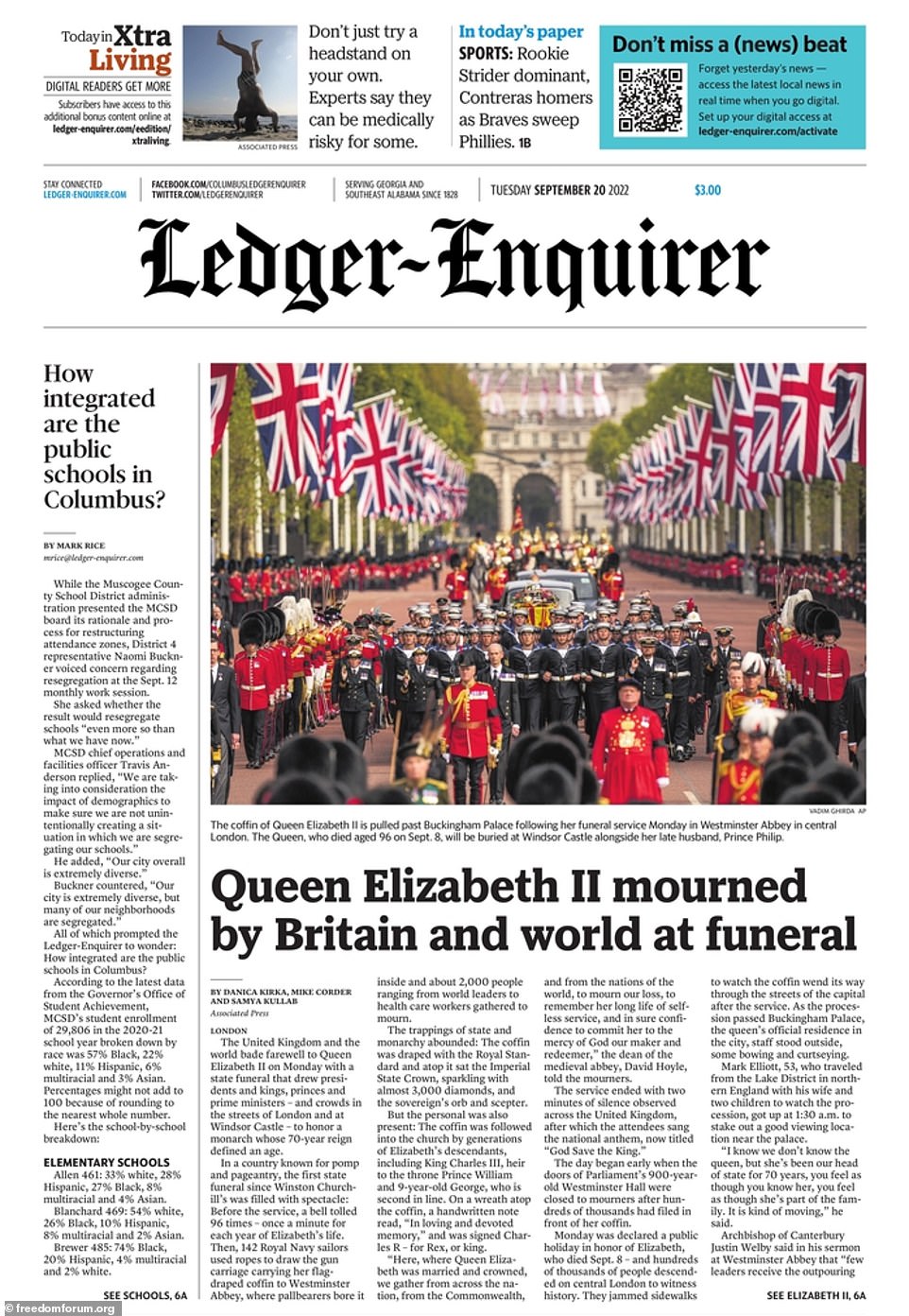 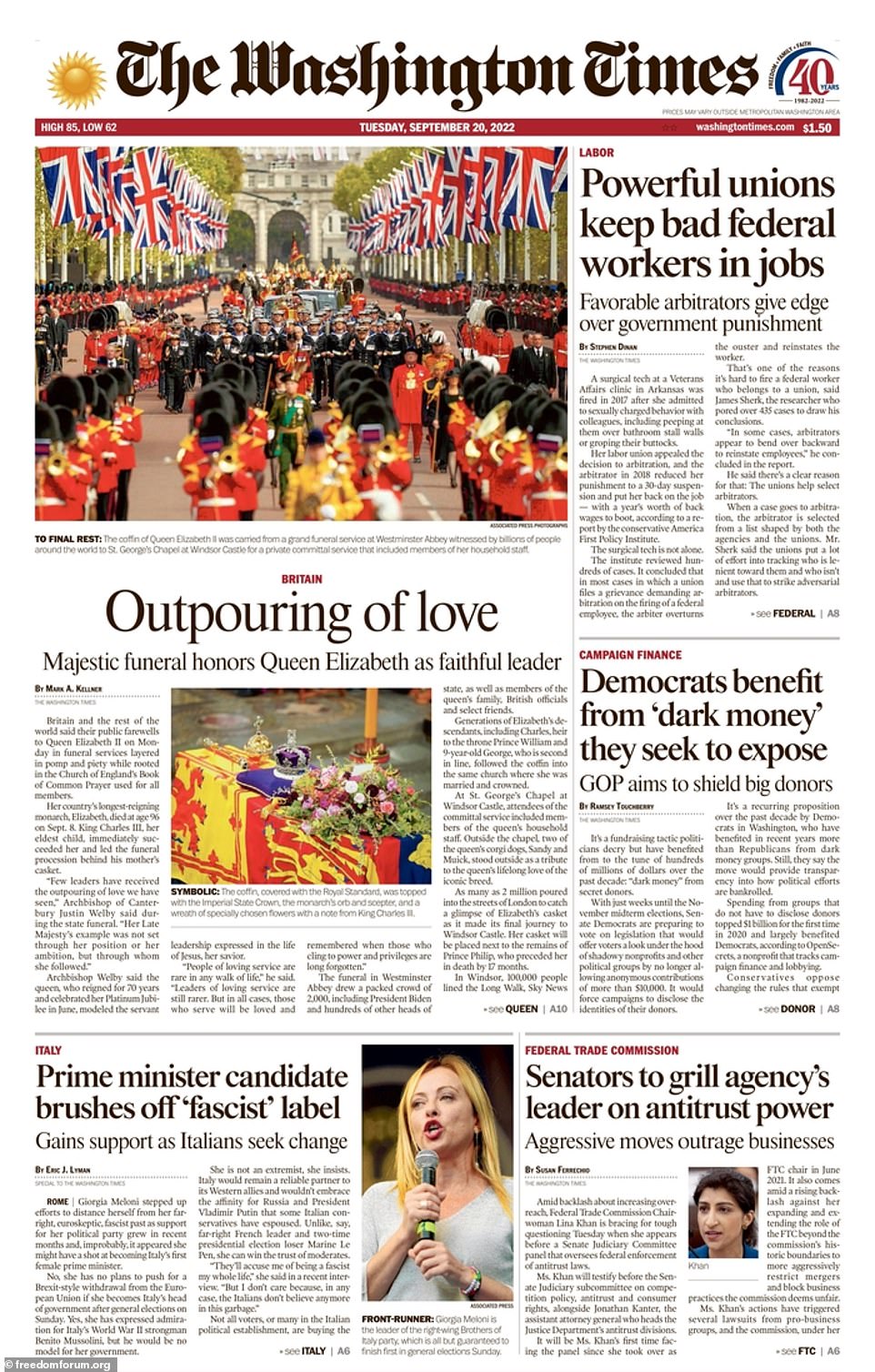 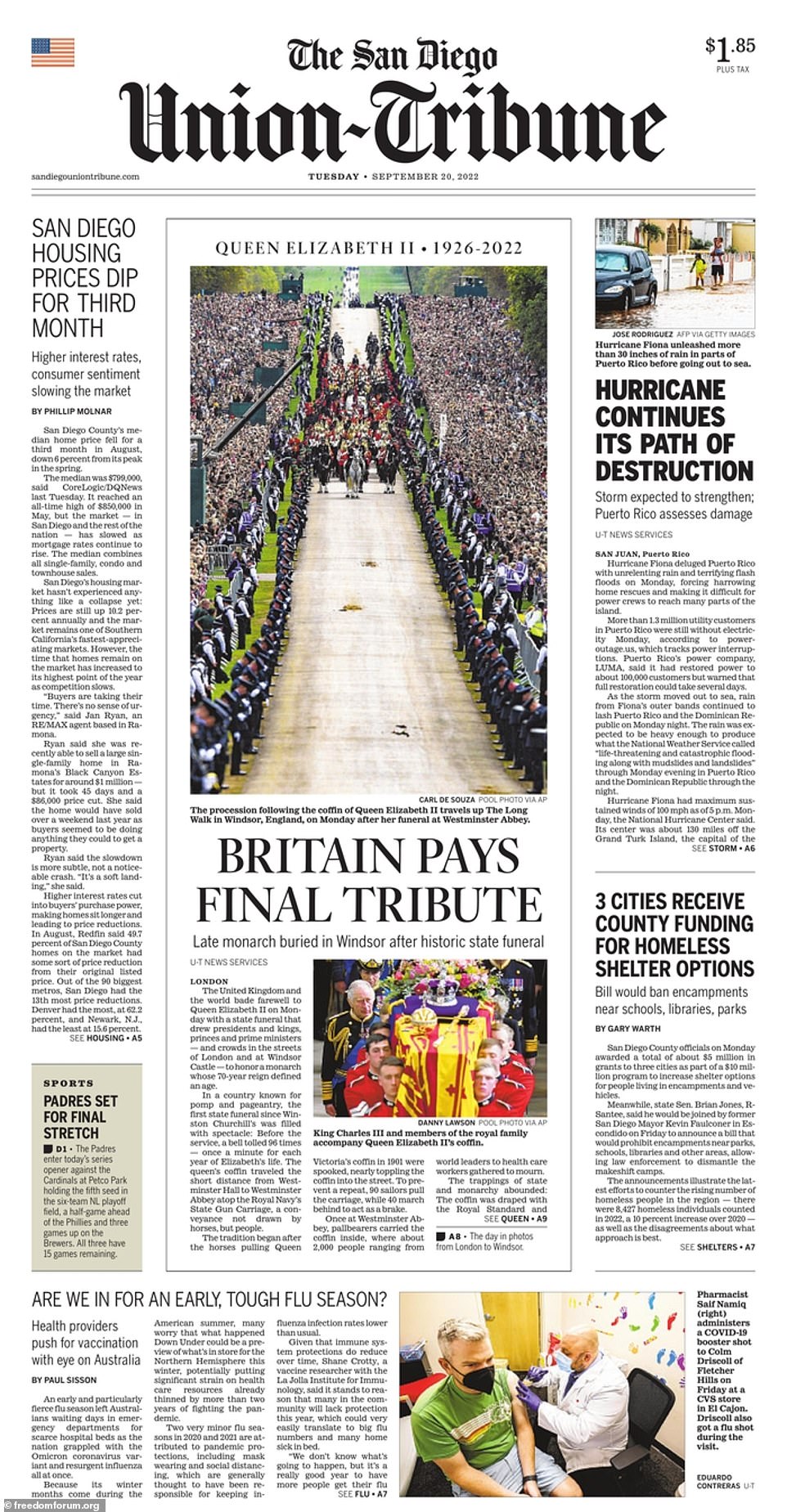 The San Diego Union Tribune also used most of its cover to pay tribute to the ceremony and the Queen’s legacy, using a breathtaking photo of the royal procession as it traveled up The Long Walk to Westminster Abbey 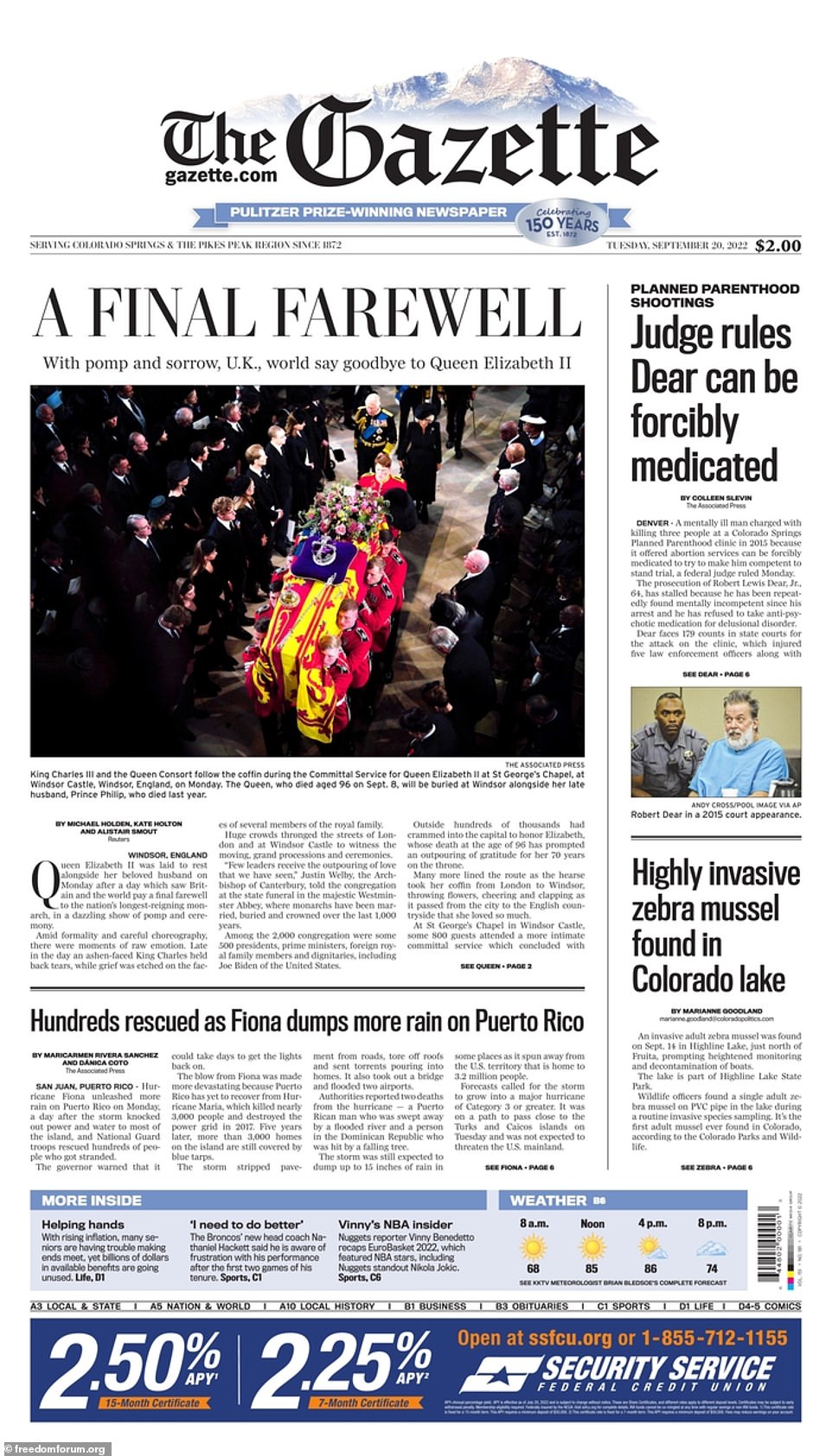 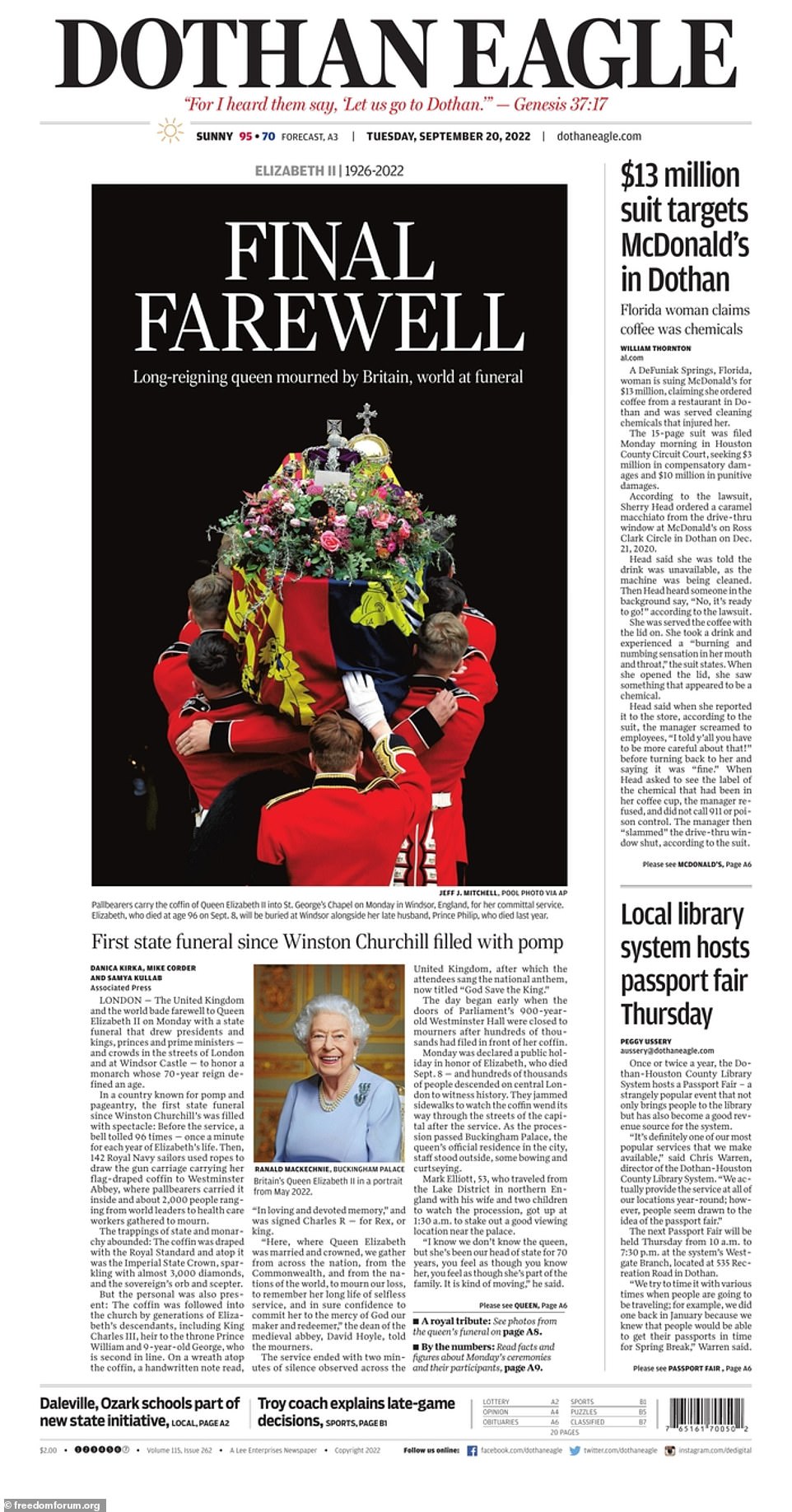 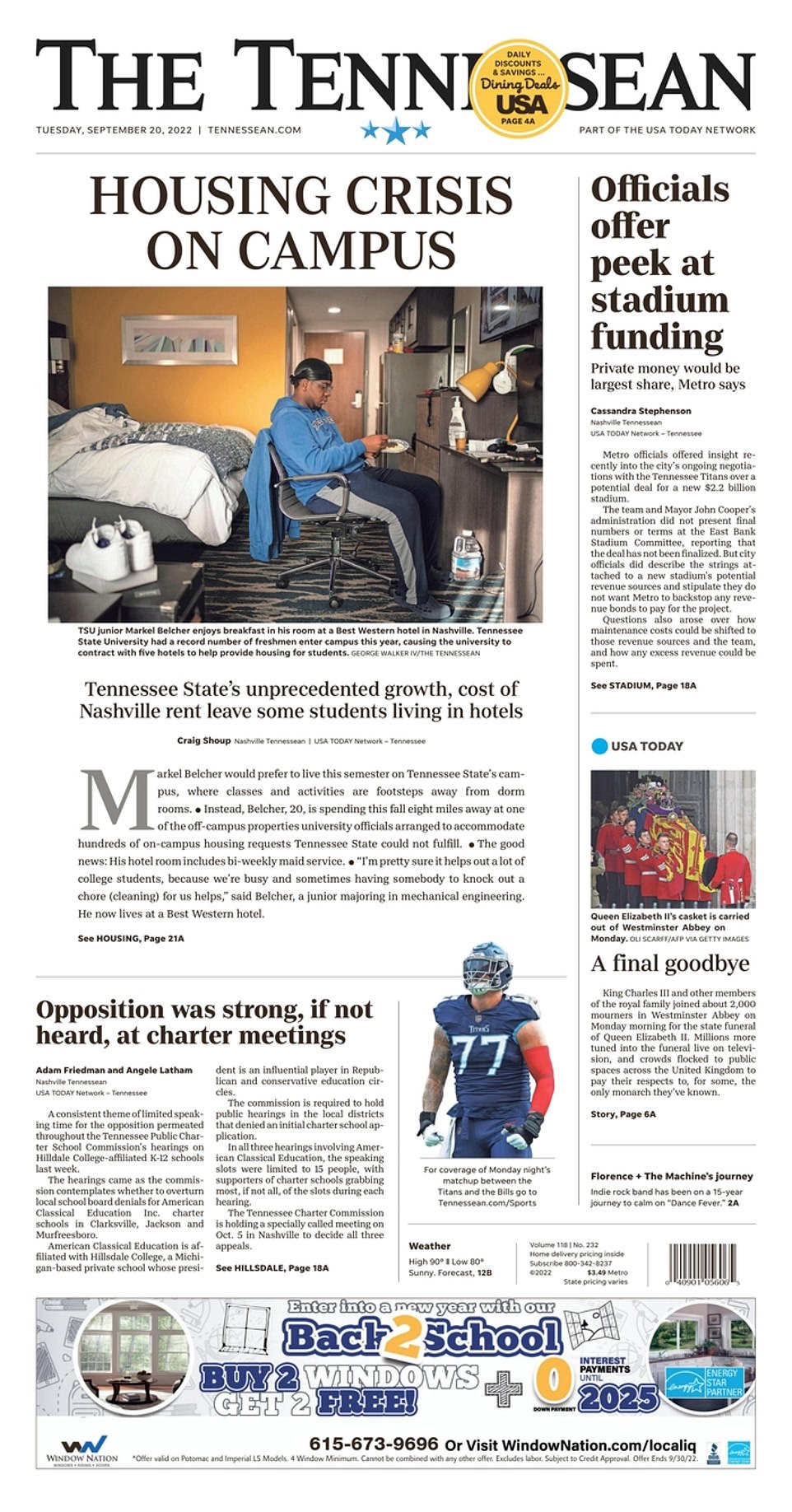