Washington: American universities will reportedly offer Chinese students code names and the chance to opt out of political discussions to protect them from being targeted under Beijing's new national security law for Hong Kong.

Several of America's top institutions will offer warning labels when their classes resume in the autumn, according to the Wall Street Journal, amid fears that the new law could lead to students and teachers facing prosecution from the Chinese authorities. 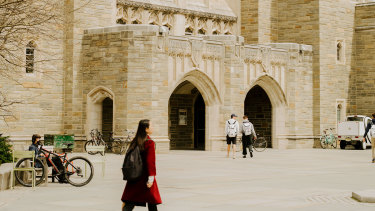 Chinese politics students at Princeton University will be given codes to use instead of their names when submitting their work, while Harvard Business School will allow students to sit out class discussions on politically sensitive issues, the newspaper reported.

The new national security law, aimed at stamping out anti-government protests in Hong Kong, gives the authorities the ability to impose lengthy jail terms for vaguely defined national security crimes, such as subversion, secession, terrorism and colluding with foreign forces.

Its reach has already been felt outside the city – with Beijing targeting Hong Kong activists based in the US earlier this month.

The new rules also apply to those who are not Hong Kong residents, suggesting that foreigners who speak in support of the city's independence or criticise the administration could be prosecuted upon entering Hong Kong or mainland China.

Almost 370,000 Chinese students and 7000 students from Hong Kong enrolled at US universities in the previous academic year, many of them choosing to take courses covering Chinese law and politics.

Safety concerns have become more pronounced in the age of coronavirus, with many universities switching to virtual learning, leaving video classes vulnerable to eavesdropping by state authorities.