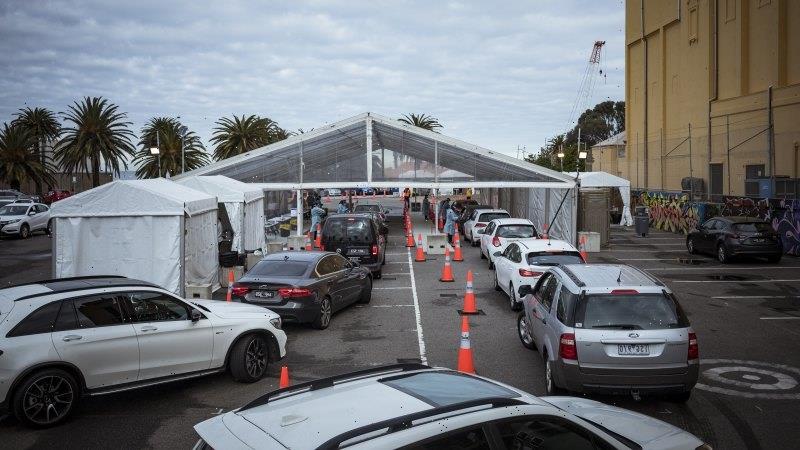 Victoria has recorded its highest daily coronavirus case total for this current outbreak, as Melburnians mark their 200th day in lockdown. 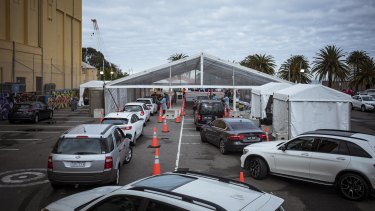 People queue for testing next to the Palais Theatre in St Kilda, in Melbourne’s inner south. Credit:Chris Hopkins

Many of the cases stem from people getting their mandated tests on day 13 of their quarantine period, including people linked to Al Taqwa college. Of Thursday’s cases, 44 were in isolation for their entire infectious period.

Authorities are investigating the acquisition source for three cases, the remaining 54 have been linked to current outbreaks.

The figures come after health authorities expressed increasing concern about the virus spreading in St Kilda. The Department of Health has urged all residents of Glen Eira and Port Phillip to get tested for COVID-19, regardless of whether they have symptoms.

On Wednesday, Victoria’s COVID-19 response commander Jeroen Weimar said there were 15 unlinked cases in the south-eastern suburbs in recent days.

He said the mystery cases were focused around Middle Park and Caulfield North, and they were all genomically linked, but the only other factor that linked them was geography.

“We have accountants, we have architects, we have a sex worker, we have members of the Orthodox Jewish community, and we have a pizza guy who worked in a pizza shop in Glen Eira,” Mr Weimar said.

“It is a very broad and disparate range of people.”

Authorities on Wednesday evening identified tram route 96 from St Kilda Station to Luna Park as a “tier 2″ exposure site, meaning anyone on it during specified timeframes has to get tested for COVID-19 and quarantine until they receive a negative test result.

Thursday’s high case total comes as Melburnians mark 200 days confirmed to their homes, although there is some conjecture about whether the milestone falls on Thursday or Friday.

Mr Weimar said on Wednesday that the COVID-positive sex worker and one of her acquaintances, who also tested positive, were homeless or transient.

Leaders in the sector say the state’s homeless hotel program is operating during lockdowns but with significantly fewer sites than in last year’s second lockdown.

Youth Projects chief executive Ben Vasiliou said there were concerns among sector leaders that Melbourne’s homeless community was at significant risk and that if more positive cases were returned on Thursday, increased support to quarantine them would be required.

“This is moving very, very quickly,” he said.

There are concerns, too, that no matter how hard Victoria locks down, driving transmission to zero and keeping it there might be impossible with cross-border seeding events seemingly inevitable.

NSW hit a daily high of 633 cases on Wednesday and Premier Gladys Berejiklian said her state had not “seen the worst of it”, with modelling suggesting it may hit 2200 cases a day if the current rate of infection does not decline.

There are more than 550 exposure sites now listed in Victoria.

An apartment complex in Melbourne’s north-west and an IKEA in Springvale were declared tier 2 sites, according to the latest listings.

Nearly 27,590 people received their vaccine doses in the past 24 hours in Victoria.