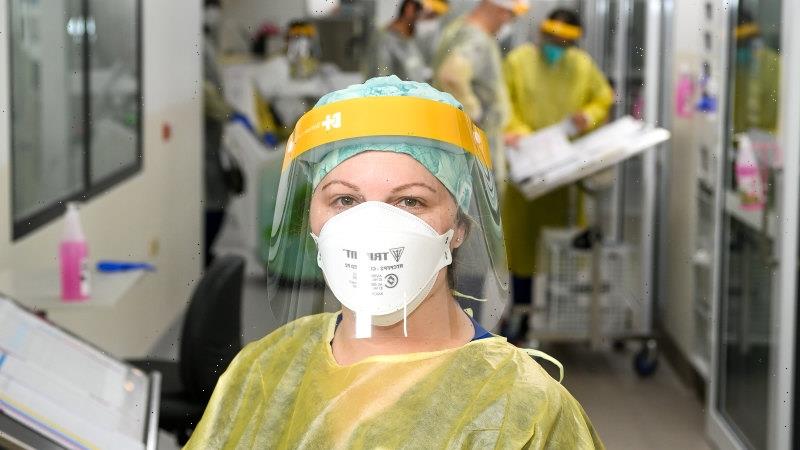 For the first time in more than 20 years, the Victorian head of one of the most powerful medical unions in the country will be putting on her scrubs and stepping into help at the Royal Melbourne Hospital’s emergency department.

It’s one sign of an extraordinary and incredibly difficult period for the health system. After hearing countless stories of nurses being “smashed” every shift, their workloads now unrecognisable, Australian Nursing and Midwifery Federation Victorian secretary Lisa Fitzpatrick felt it was her duty to help. 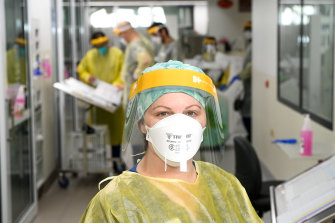 Narkitaa Van Ekeren, ICU nurse unit manager at the Northern Hospital, and her colleagues are gearing up for an influx of COVID patients in next three weeks.Credit:Justin McManus

“It was something I needed to do,” said Ms Fitzpatrick, who undertook her hospital induction last week and plans to work every Saturday. “Nurses are anxious and stressed. They can’t see light at the end of the tunnel. But they’re resilient, they know they just have to keep going.”

Every day across Melbourne, intensive care patients are zigzagging across the city, and are being transported as far away as Geelong, en route to an empty bed.

The massive undertaking called load sharing has been described as a “saving grace” for the hospital system, now grappling with 798 COVID-19 patients, enough to fill a major metropolitan hospital and more.

By sharing patients between hospitals, in some cases transporting them well away from their homes, doctors have been ensuring no one unit finds itself overloaded without the capacity to admit the gravely ill. But it also comes with some risk to the patients. 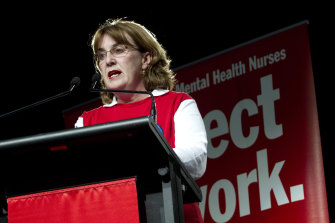 “Any transport is something that all of us are trained for and think about, but it would only be a fool that didn’t consider it a big evolution,” said Australian and New Zealand Intensive Care Society president Anthony Holley.

It’s one of a number of seismic changes that are being progressively introduced to hospitals in Victoria.

Orthopedic surgeons, consultant physicians, theatre staff, neurologists and even psychiatrists are being seconded to help in coronavirus wards and moved into other sections of hospitals to help with the COVID-19 response.

Several senior health sources not authorised to speak publicly said there had been high-level discussions about the prospect of creating ‘streamline’ hospitals for emergency surgeries like ruptured aortas, heart attacks, organ transplants and trauma incidents, and how this could be done without compromising patient safety.

“They’re busy too, but not as busy as all the adult hospitals,” one source said.

Private hospitals including those run by Epworth Healthcare are now taking on the lion’s share of emergency and trauma surgeries.

Meanwhile, The Sunday Age can reveal that states have been asked to ensure they have ready plans to deploy voluntary nurses or other staff to Victoria, or any other jurisdiction that request it, in a long-standing arrangement for responding to emergencies through the National Health Emergency Standing Committee.

This week, Victorian Health Minister Martin Foley announced that 1000 healthcare workers living overseas, including Australians abroad, will be recruited and offered reduced relocation costs, in one attempt to ease the pressure on the hospital system, on top of 350 already recruited. And recently, dozens of nurses in Melbourne have received refresher courses preparing them for an intensive care deployment.

Victoria’s hospital watchdog Safer Care Victoria has developed guidance on surge workforce plans for health services, and the Victorian Department of Health confirmed that some hospitals will be making changes to their “model of care”. For example, anaesthetists could be brought in to work with other doctors in intensive care.

Some senior medicos, however, are concerned that while hospitals each have their contingency plans to flex up hospital capacity, the state’s response still lacks central coordination and there are growing concerns patient care could be compromised for non-COVID medical emergencies.

“It would be very useful if everybody across the state had a consistent and uniform plan of what they’re going to do, rather than 81 different health services running on their own,” said AMA Victoria president Roderick McRae.

The worst is still yet to come. Saturday saw a dramatic spike in hospitalisations – an increase of more than 100 admissions in a single day. COVID-19 Response Commander Jeroen Weimar explained that the hospitalisations being reported were a result of cases first detected 10 to 14 days ago. 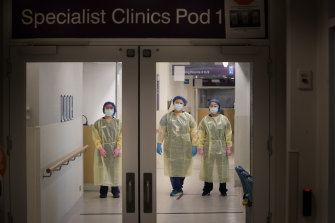 Earlier this month, triage tents started going up outside major metropolitan hospitals in an attempt to take the pressure off already strained emergency departments – including Sunshine and Footscray – with some nurses telling The Sunday Age this week it felt like they were preparing for a war. New COVID-19 wards have been set up at the western suburb hospitals in recent days.

Western Health ICU director Craig French said entire families were scattered across beds in Sunshine and Footscray and this week all patients in intensive care were younger than the 56-year-old doctor. None were vaccinated.

“These people are incredibly sick and they’re needing high levels of oxygen and usually either invasive or non-invasive support with a ventilator,” Associate Professor French said.

The number of ICU beds available in Victoria has expanded by about 20 per cent since late September to 484. In the same time, the number of COVID-19 patients needing intensive care has almost quadrupled to 163.

Some extra capacity had been found by cancelling elective surgery, with only those most in need of urgent treatment now having procedures go ahead.

“The reality is we have 700 beds being taken up today with COVID patients. They are sick and they need that treatment, and it means that others are having to defer the treatment where that’s possible,” Mr Weimar said.

On Saturday, the Victorian opposition highlighted the case of Chase Arnesen, who said planned surgery to remove a tumour affecting his hearing and balance had been cancelled indefinitely. He is among the more than 66,000 Victorians waiting on the elective surgery waiting list.

Opposition health spokeswoman Georgie Crozier said the state government had “18 months to prepare our health system [and] they have failed to do so”.

As has often been repeated by Premier Daniel Andrews and healthcare workers, it is not a lack of physical beds or ventilators that will be the challenge, but a finite number of staff, in particular nurses. And those working within the stretched system have been warning of burnout for months.

“Your skin itches and you end up with irritations. There is a sense of thinking ‘when will this end?” But the staff just don’t give up. They continue to come back every day and I’m really proud of that.”

Unlike last year when people with COVID-19 weren’t as sick, almost every patient being admitted to the hospital’s ICU has lung failure and they are arriving in ICU extremely fatigued, sweaty, their skin tinged grey.

“We are seeing that on a huge level with Delta. It’s quite shocking. The patients are also a lot younger. We have patients as young as 21 in the ICU.”

There are worrying official forecasts about the impact of the growing wave of COVID-19 patients, not just on those with the disease, but all sick Victorians. A brief document released by the Victorian government when it announced its road map out of lockdown in September presents one of the most frank depictions of what Victorians should expect as they begin reclaiming their freedoms.

If the number of COVID patients was to grow by another 200 people category one elective surgeries – meant to be performed within 30 days – could be paused.

If more than 2500 COVID-19 patients are admitted to hospital – a scenario seen in 63 per cent of road map simulations conducted by the Burnet Institute – hospitals may only treat the sickest patients.

This could see a twin peak of demand around December, when COVID-19 cases are predicted to be at their highest, but also when other patients start returning to hospitals in greater numbers – the result of car accidents, sport or drinking – as restrictions ease.

“All those unvaccinated people will start to get COVID-19, as well as all the other things that happen when the community starts to open up, so I think our hospital systems are really bracing for quite an overwhelming surge in presentations,” said emergency doctor Simon Judkins.

Ms Fitzpatrick said you would be hard-pressed to find any area of the state’s public hospitals which isn’t under extraordinary pressure.

“There isn’t an area where people aren’t being smashed. Emergency departments are very challenging, COVID wards are particularly heavy, maternity services are being stretched, it’s so widespread,” she said. “If you’re not in a COVID area, you’re being pulled from your own area to help out and that leaves that area short.”

She said healthcare workers were going to extraordinary lengths to ensure those who were dying comforted in their final moments or had a family member by their side.

“The lengths that people are going to is unbelievable,” she said. “It is amazing and it just a testament to the quality of the people that we have working in our health system.