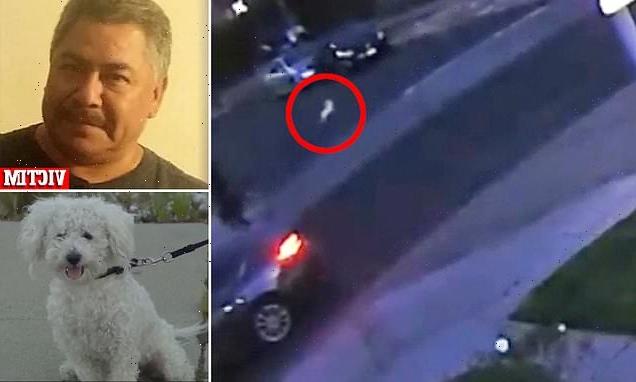 Moment LA dad, 52, is shot dead while walking his dog before pet runs away from scene and goes back home to alert victim’s family, as city’s woke DA George Gascon is blamed for murder spike

Video shows Marcos Sandoval, 52, walking with his dog, Little Torro, at the intersection of Genesee Avenue and Saturn Street when a dark-colored Ford Fusion approaches.

The driver exits the vehicle and interacts with Sandoval before two shots ring out.

The first shot sent Little Torro running across the street and back to the family home to alert his owners of the tragedy. The dog was not injured in the incident.

Cops say they have no motive for Sandoval’s killing, and it is unclear if he knew his murderers prior to the shooting.  His stricken family say he had no enemies.

After the second shot, the suspect got back into the vehicle and fled the scene, traveling northbound on Genesee Avenue.

Neighbors told CBS Los Angeles, which obtained a copy of the video footage, the neighborhood is usually a ‘no-crime’ zone.

The fatal shooting comes as Los Angeles District Attorney George Gascon is under fire for the city’s murder spike and overall increase in violent crimes.

Last week, two senior Los Angeles County prosecutors hit him with a lawsuit alleging they were demoted for making complaints about their woke bosses’ new policies that call for lax sentencing for violent crimes. 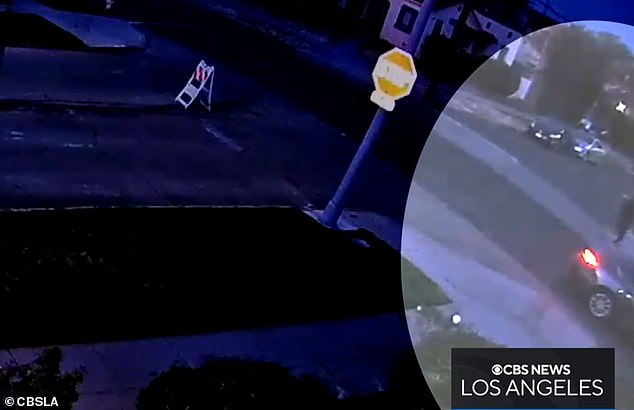 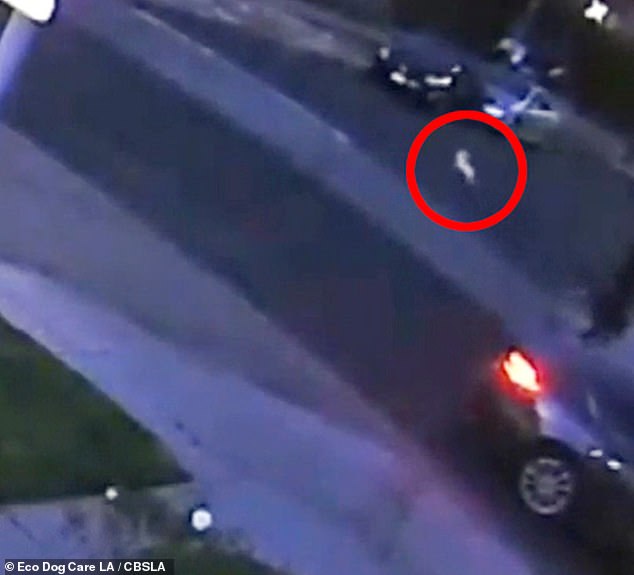 Moments later, Little Torro was filmed fleeing the scene after his master was fatally-shot 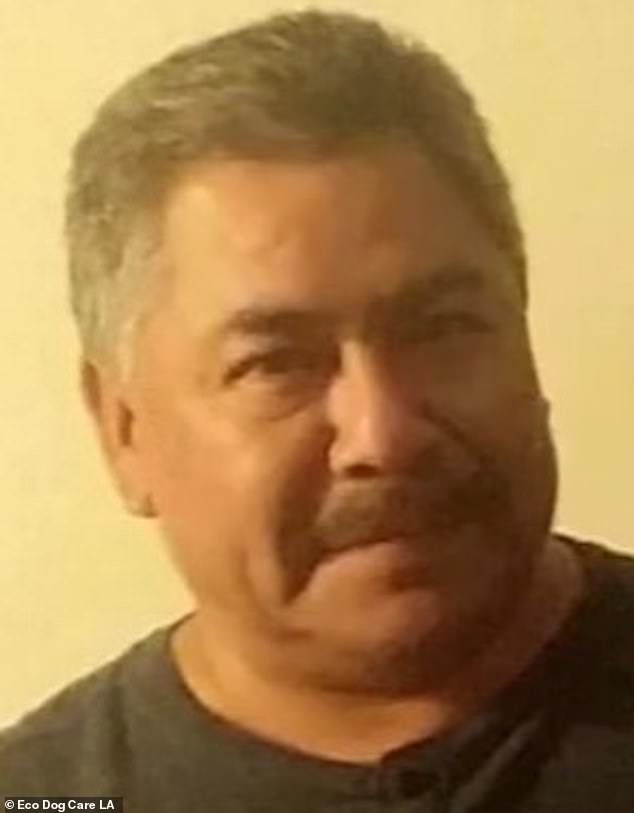 Marcos Sandoval, 52, was shot and killed while walking his dog in his Los Angeles neighborhood early Saturday morning 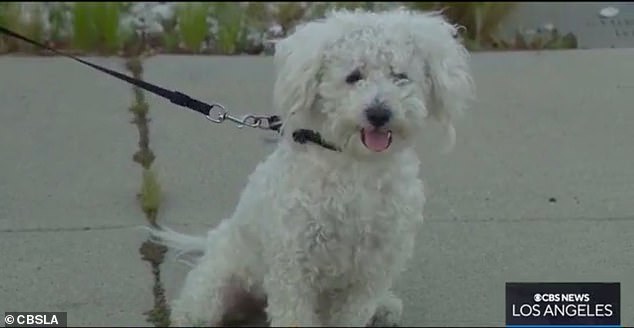 Sandoval’s dog, Little Torro, was the first to alert the 52-year-old’s family of the tragedy

Police responded to Sandoval’s neighborhood around 6.15am Saturday after a passerby discovered his body and called 911.

Authorities believe he was shot about 30 minutes beforehand.

Sandoval’s daughter said the family knew something was wrong when Little Torro started frantically barking outside their home.

‘He started barking at my sister’s window, the back door, and my sister went out to look for him,’ she told the TV station. ‘When she couldn’t find him, that’s when she called me.’

She and her family told reporters they have no idea why Sandoval was targeted in the shooting, noting they were not aware of any ongoing conflict the father and husband might have had.

‘He had no enemies, he was a good person,’ said Sandoval’s daughter. ‘We don’t know why someone would just target him.’

The family created a makeshift memorial at the site of the shooting Saturday afternoon with candles and flowers.

The victim’s friends, loved ones and other community members have visited the site to leave behind memorabilia and offer their prayers to Sandoval, who is remembered by his children as ‘hardworking’ and caring.

‘He would always put me and my sister first before anyone and it’s just not fair that they just took him away from us like that,’ his daughter said. 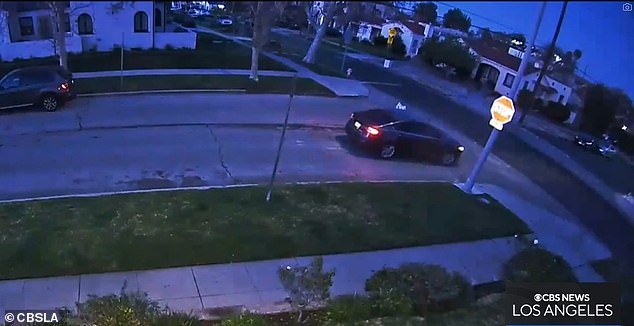 The driver exits the vehicle and interacts with Sandoval before two shots ring out. The first shot sent Little Torro running across the street and back to the family home to alert his owners of the tragedy. The dog was not injured in the incident 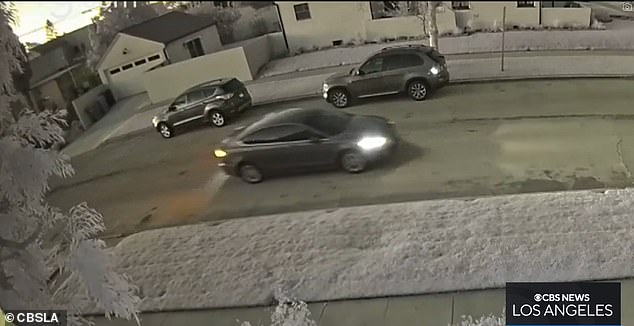 After the second shot, the suspect got back into the vehicle and fled the scene, traveling northbound on Genesee Avenue 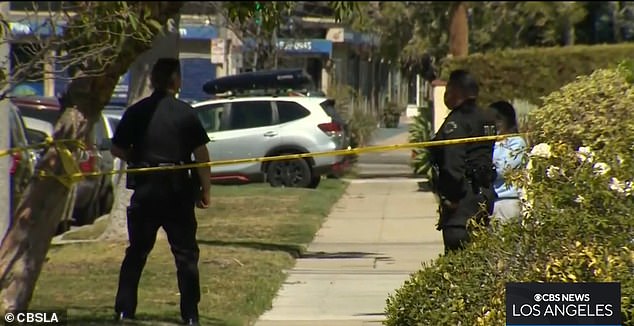 Police responded to Sandoval’s neighborhood around 6.15am Saturday after a passerby discovered his body and called 911. Authorities believe he was shot about 30 minutes earlier

A neighbor who claimed to have been awoken by the incident alleged that Sandoval and the suspect had a loud disagreement ahead of the shooting.

‘Then my dog and cat woke up and a few minutes – maybe 5 minutes – went by then I heard two gunshots. I didn’t know they were gunshots at the time.’

The resident said based on the tone of the conversation, Sandoval likely knew the suspect. She added: ‘It was emotional.’

Los Angeles police are investigating the incident, but as of Sunday has no leads or motive in the case.

‘This is a very quiet neighborhood, no significant crime patterns. So, we really have no motive for this case at all,’ LAPD Lieutenant John Radtke told the news outlet.

His description of the neighborhood was echoed by longtime resident Shirley Dionzon who said: ‘We’ve never had anything like that.’ 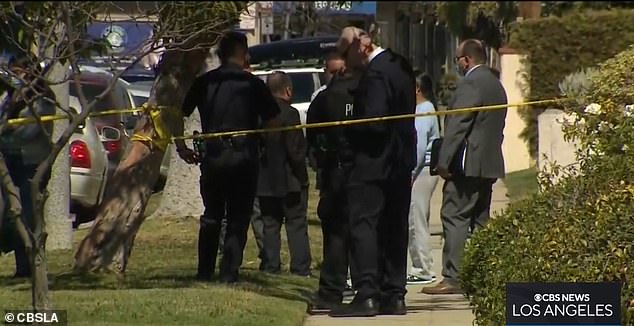 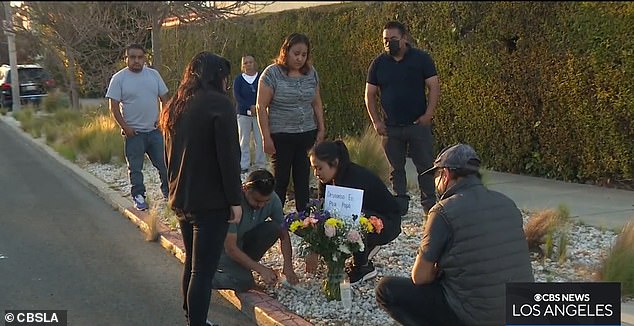 The victim’s friends, loved ones and other community members have visited the site to leave behind memorabilia and offer their prayers to Sandoval, who is remembered by his children as ‘hardworking’ and caring

Gascon, a 67-year-old former assistant chief of the Los Angeles Police Department, took over as district attorney in the heavily Democrat city in December 2020 and immediately embarked on a progressive justice reform agenda – eliminating the use of sentencing enhancements for gang membership, certain uses of guns and for prior convictions.

Since taking office, Gascon has refused to meet with prosecutors to explain the logic behind his policies, the union said.

He is now said to be reversing course amid growing fury and a fear he’ll face a recall like woke San Francisco DA Chesa Boudin, whose policies critics say prioritize the welfare of criminals over victims.

‘Over a year ago, Gascon began a massive social experiment by redirecting prosecutorial resources away from enforcing the law while simultaneously ignoring large portions of the penal code,’ Siddall said.

‘The result is an emboldened criminal element that knows the DA will not hold criminals accountable. This experiment needs to end.’ 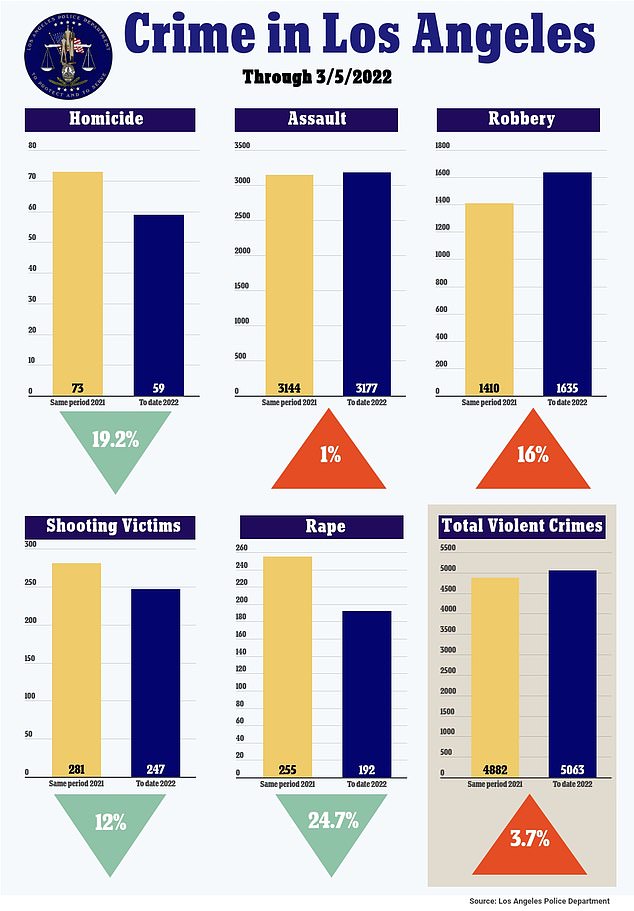 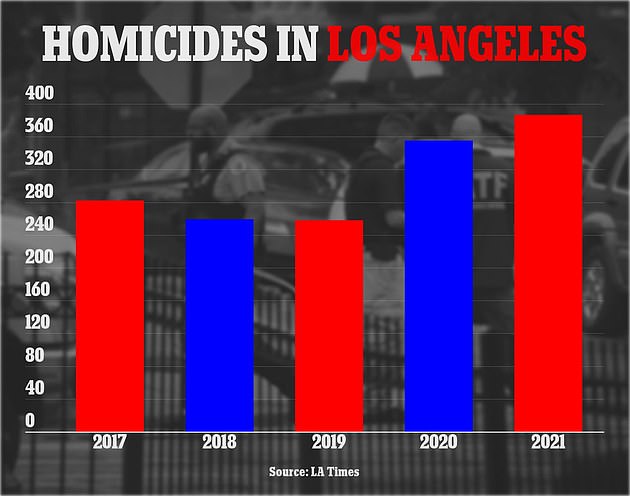 Meantime, an effort to recall him is underway – which recently saw a former LAPD chief who previously endorsed him rescind his support.

Amid growing frustration with the progressive prosecutor, more than 600 deputy district attorneys throughout LA County endorsed his recall almost two weeks ago during an Association of Deputy District Attorneys (ADDA) meeting.

The effort to oust Gascon from office started in December.

Last week, two senior prosecutors – Maria Ramirez and Victor Rodriguez – revealed they were suing their boss after they claim they were demoted for making complaints about his policies, according to Fox News. 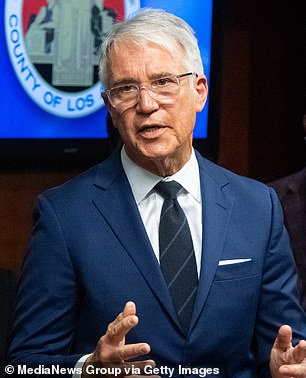 An effort to recall Garcon (pictured) is currently underway and has been endorsed by more than 600 deputy district attorneys throughout LA County. Garcon was also hit with a lawsuit from two former senior prosecutors last week

Ramirez and Rodriguez allege that they were were reassigned because they opposed Gascon’s bail reform directives and concerns over how crimes were being prosecuted.

The lawsuit alleges that the deputies were reassigned ‘because they disclosed and/or refused to take actions that they reasonably believed were violations of law.’

Ramirez is the former director of the Bureau of Specialized Prosecutions and Rodriguez once headed the Bureau of Branch and Area Region II and part of Area Region I. Both were demoted to the position of head deputy, the lawsuit states.

The plaintiffs each have more than 30 years of service in the District Attorney’s Office and aspired to be assistant district attorneys, according to their suit. Together, they supervised hundreds of employees before their demotion.

Ramirez alleges her demotion came after she complained that Gascon’s directive to substantially change the way juvenile crimes are prosecuted was unlawful. Specifically, the directive mandated Ramirez use alternate prosecution theories that minimized a juvenile’s criminal conduct, no matter how violent, which did not accurately reflect the true offense, according to the lawsuit.

It meant that in the case of a juvenile, only one charge could be used in prosecution against them, no matter how serious the crime or the number of victims.

Rodriguez alleges he was demoted after discussing the possible prosecution of police officers who were involved in a shooting that killed two people.

Both Ramirez and Rodriguez are seeking unspecified damages, while Gascon’s office is not commenting on the lawsuit due to the pending litigation.