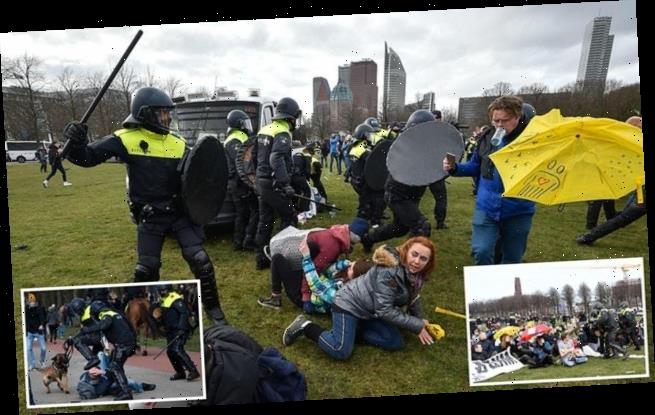 Some 2,000 people gathered in The Hague on Sunday to protest against the Dutch government and its coronavirus lockdown.

Several people carried a homemade banner with the words ‘Love & Freedom: No Dictatorship’ written on it in Dutch, while many others carried yellow umbrellas.

Another demonstrator carried a makeshift set of stocks with a photo of prime minister Mark Rutte’s head stuck in the middle and a sign saying: ‘If you love the Netherlands, vote them out.’

A heavy police presence ringed the park where the demonstrators gathered, and police tweeted before the scheduled start of the event that the maximum number of participants had already been reached. Hundreds more people arrived after the tweet.

Although the protest was generally peaceful, police tweeted that they had arrested one man for attacking an officer with a stick.

Trains heading to The Hague were halted to prevent more people making their way to the city. 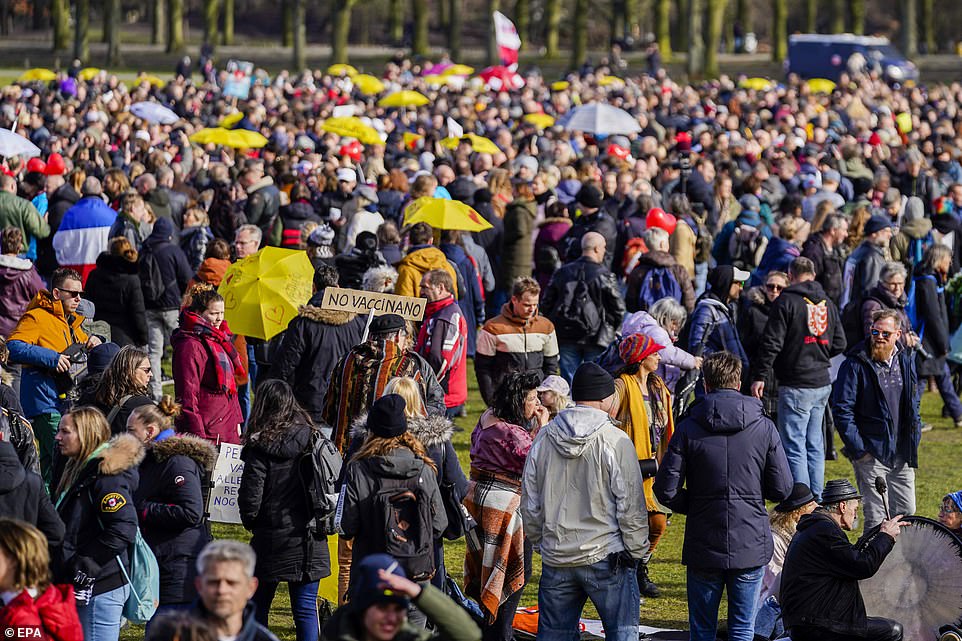 Anti-lockdown protesters and police officers at the Malieveld, The Hague, The Netherlands, on the eve of the Dutch elections 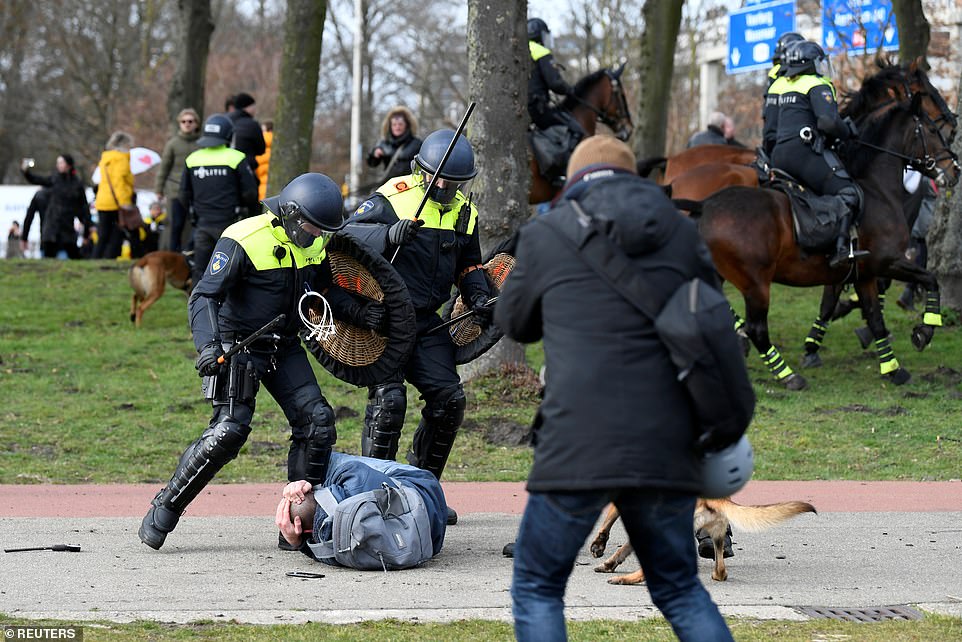 Pictured: Dutch police fight with a demonstrator during a protest against coronavirus lockdown in the Hague this afternoon 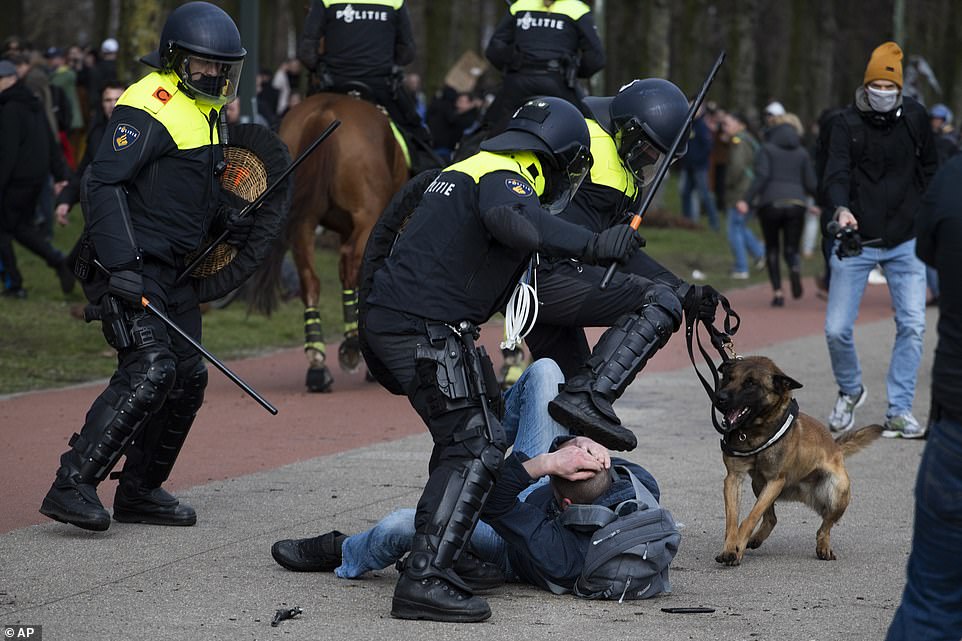 Police warned people not to attend the event but hundreds more continued to arrive. Pictured: Dutch riot police appear to kick a man during the demonstration which saw thousands gather to protest against the government’s Covid-19 restrictions 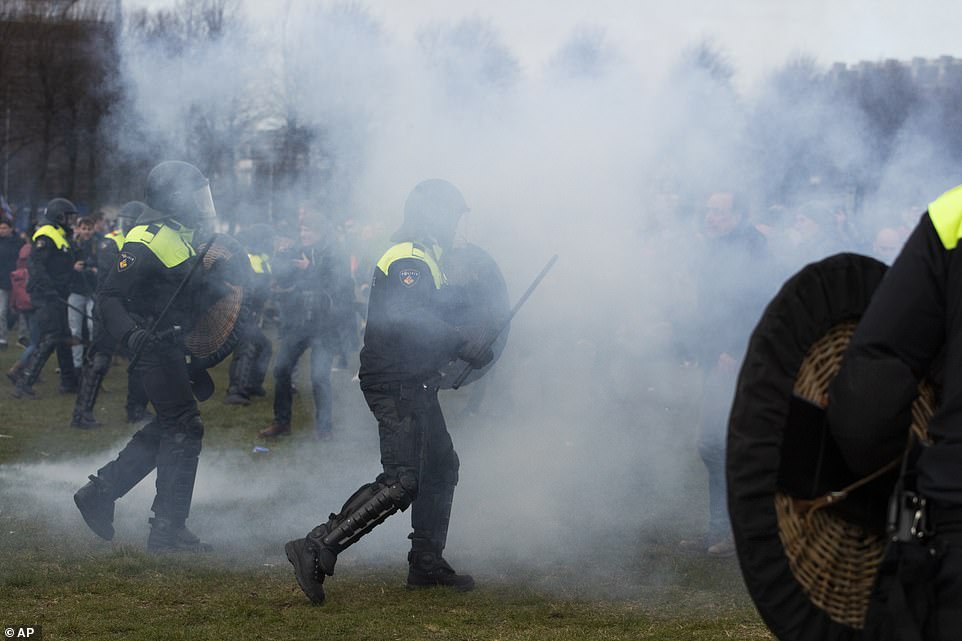 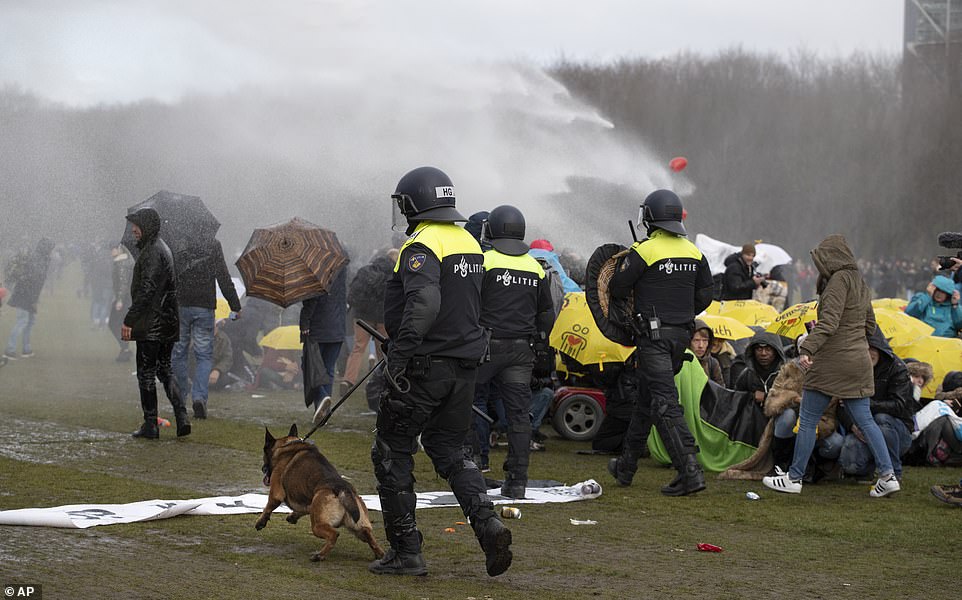 Infection rate in the Netherlands remains high. Pictured: police uses a water cannon and dogs to break up the demonstration 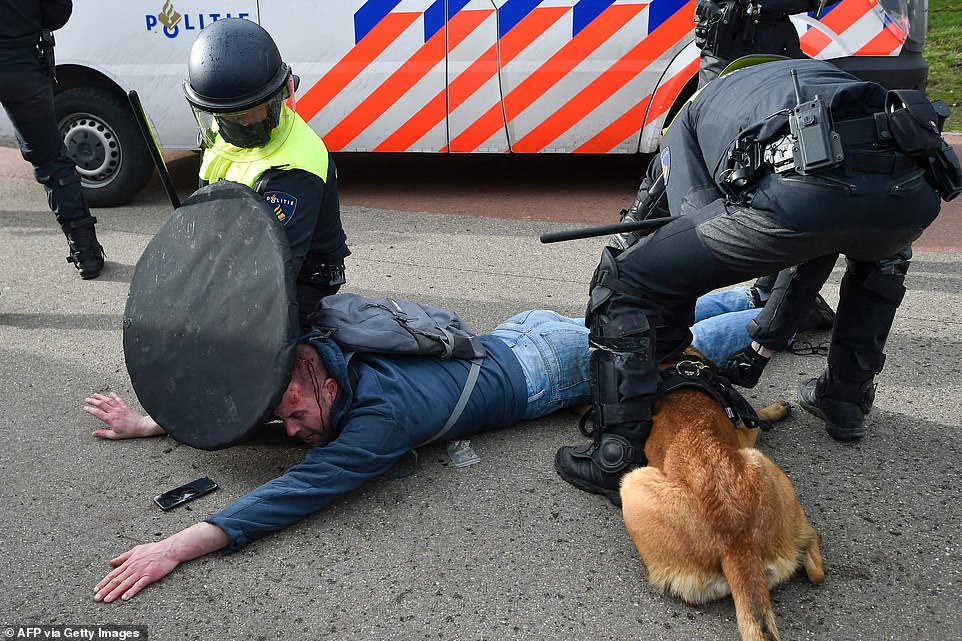 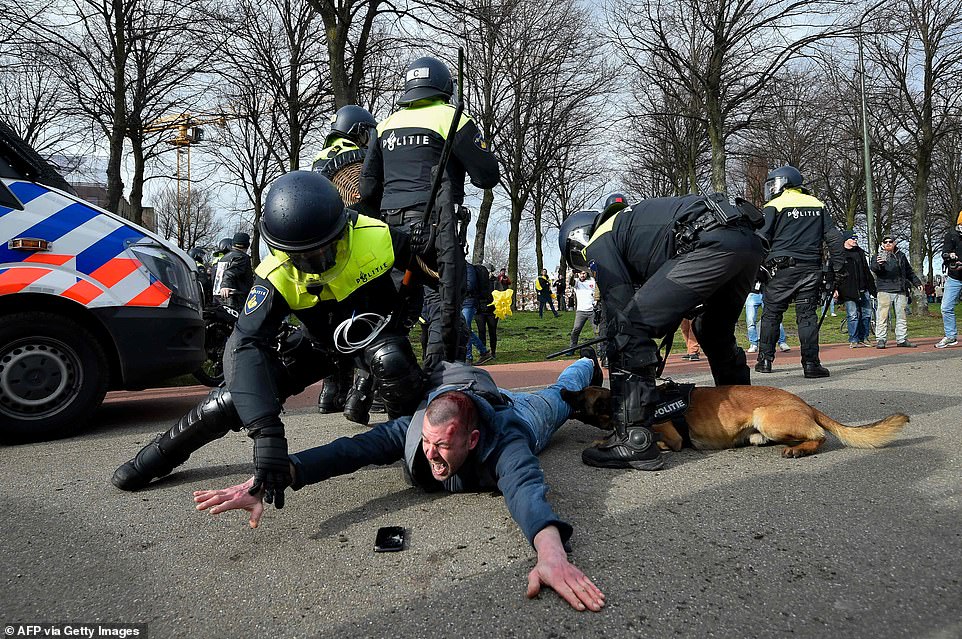 Dutch police say the demonstration was largely peaceful. Pictured: Officers detain a man during the protest on Sunday

Smaller demonstrations have taken place in Amsterdam in recent weeks, with riot police repeatedly called in to disperse protesters who refuse to leave.

They reflect a growing impatience among a small section of society at the lockdown that has seen businesses including bars, restaurants and museums shut down since mid-October.

Despite the lockdown, numbers of infections remain stubbornly high, and more than 16,000 people are confirmed to have died with Covid-19 in the Netherlands.

Meanwhile, party leaders took to the airwaves to seek the support of undecided voters but also to start jockeying for position ahead of the formation of the country’s next governing coalition.

Mr Rutte said in turn that the Christian Democrats were the most natural partner for his conservative People’s Party for Freedom of Democracy. 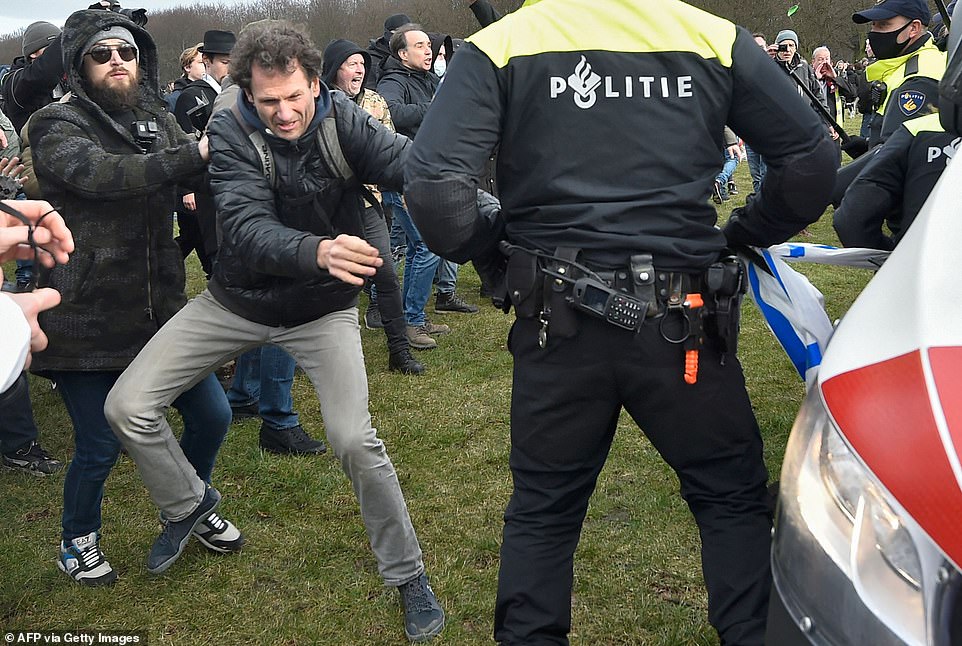 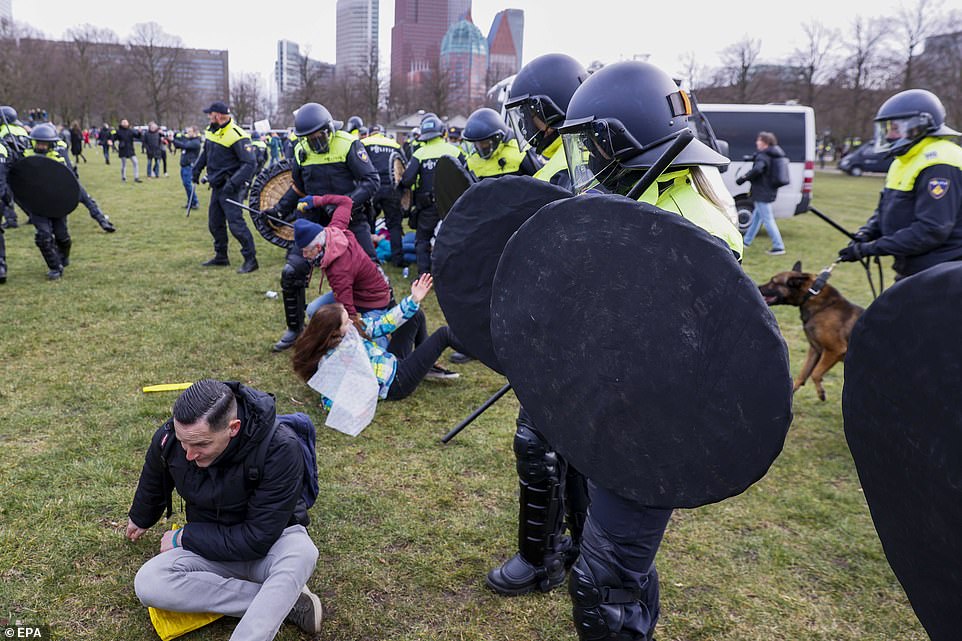 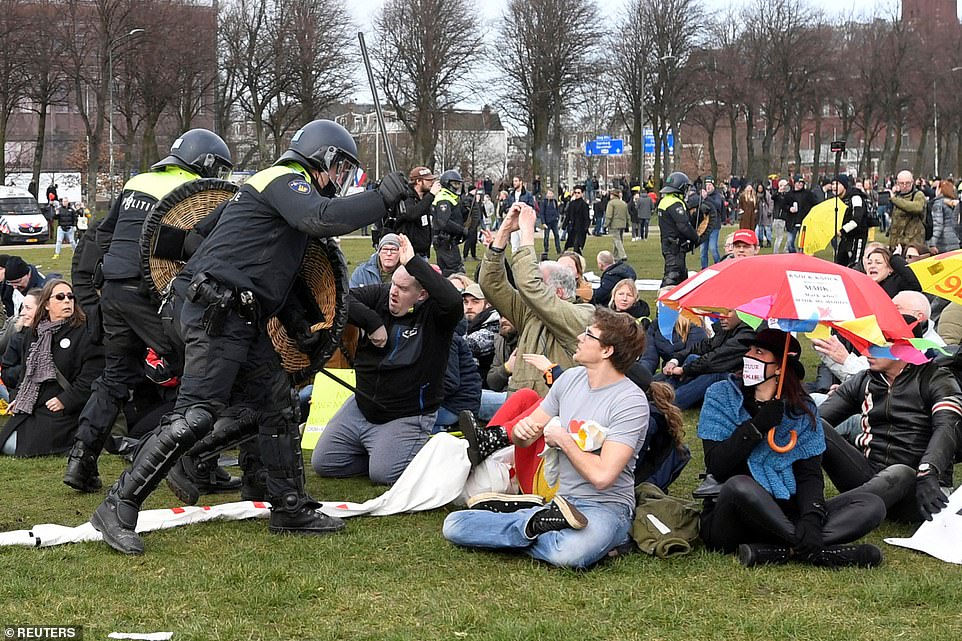 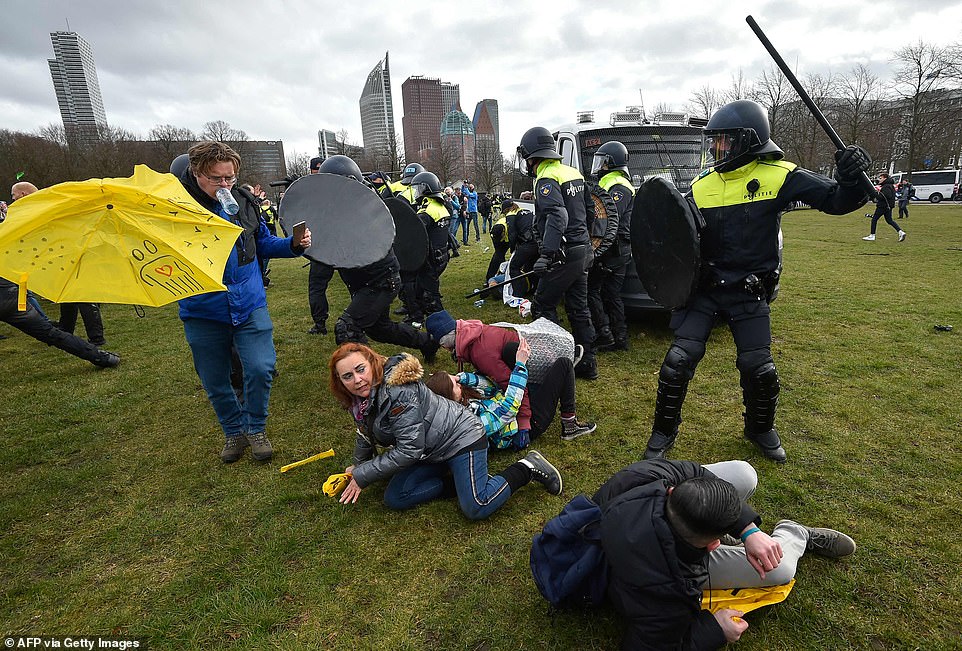 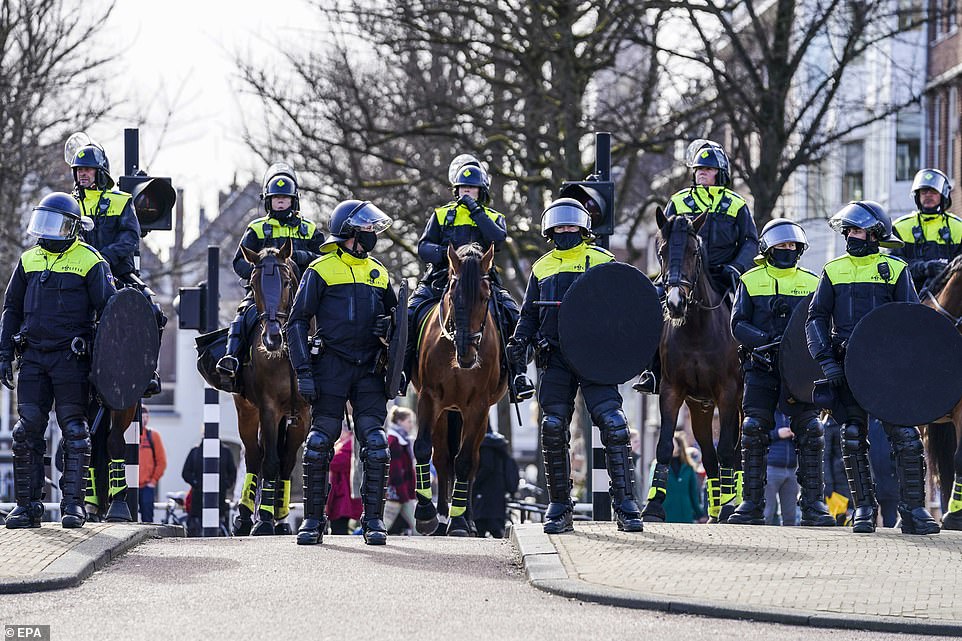 Pictured: Anti-lockdown protesters and police officers at the Malieveld, The Hague, The Netherlands this afternoon 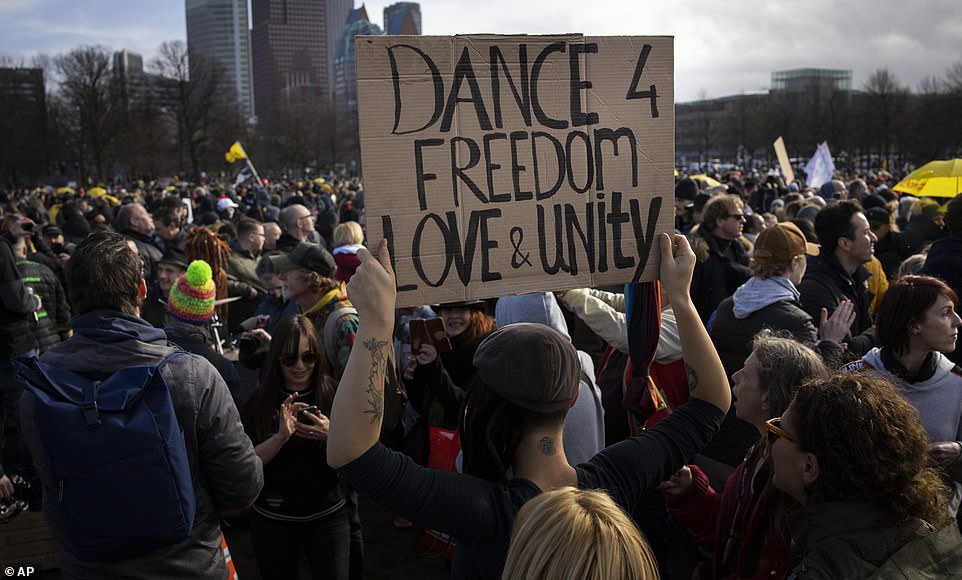 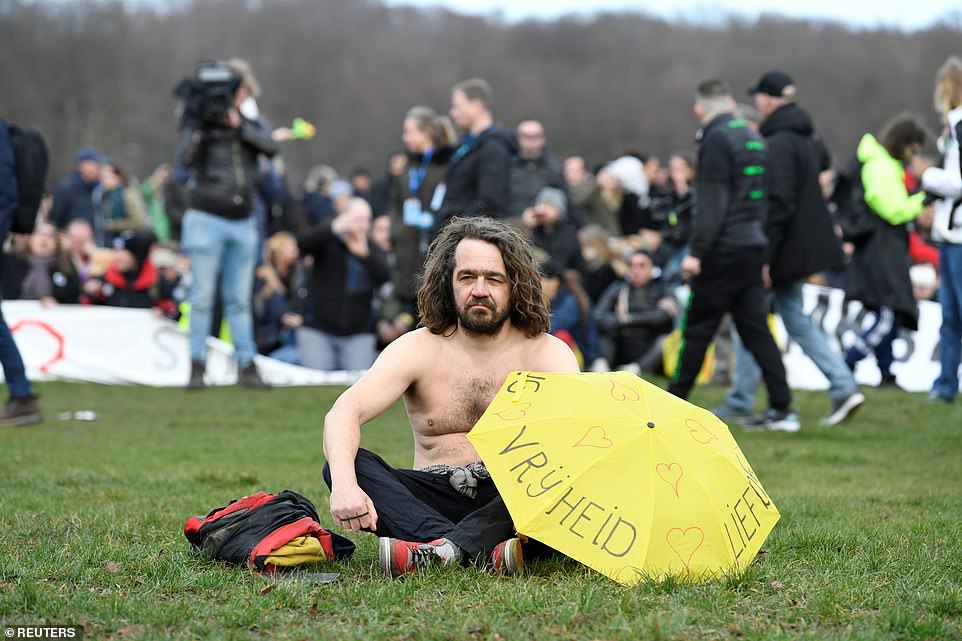 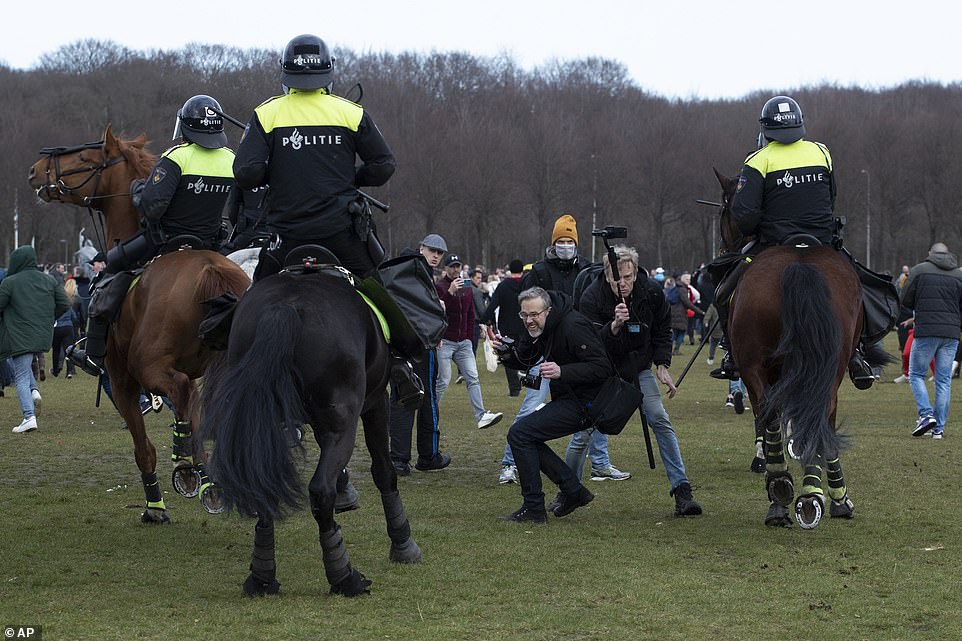 A record 37 parties are taking part in the election for the 150 seats in parliament’s lower house. Pictured: riot police move in

‘This is a real bromance,’ Jesse Klaver, leader of the Green Left party, said.

The comments foreshadow what could be a lengthy process of forming the next coalition after three days of voting wraps up on Wednesday night.

A record 37 parties are taking part in the election for the 150 seats in parliament’s lower house. The party that wins the most seats will be first in line to lead talks to form the next coalition, but with so many parties likely to enter parliament it could be difficult to form a coalition that commands a majority.

If, as polls predict, Mr Rutte’s party emerges with the largest number of seats, he would be in a position to form his fourth ruling coalition and become the Netherlands’ longest-serving premier.

A limited number of polling stations are opening on Monday and Tuesday, primarily to allow people considered vulnerable to coronavirus to vote. Wednesday is the main day of voting and results are likely to be known Wednesday night and into Thursday.