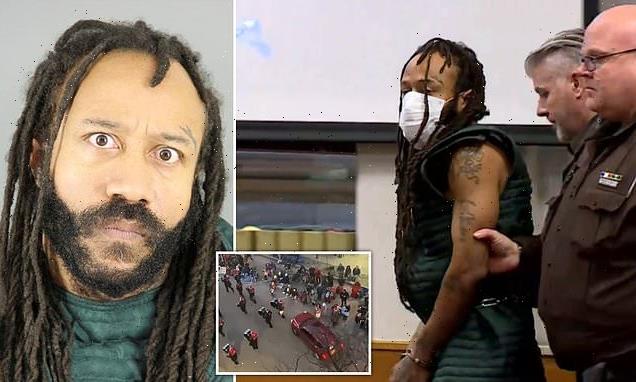 Shackled Waukesha Xmas parade ‘killer’ Darrell Brooks appears in court charged with multiple murders after he ‘intentionally’ plowed his SUV into crowd and ‘tried to hit as many people as possible’: Death toll rises to SIX as child dies in hospital

The man accused of killing six and injuring 62 when he drove his car into a Christmas parade in Wisconsin appeared before a judge on Tuesday, as the court was told of his lengthy criminal history – and a child was added to the list of victims.

Darrell Brooks Jr., 39, made his first appearance in court on Tuesday as the death count rose.

Brooks, dressed in a green sleeveless vest, rocked back and forth in his chair during the hearing, staring at the floor throughout.

The court heard that he had multiple previous violent convictions, charges filed in three states and lengthy custody time in Georgia.

He had repeatedly failed to show up for court hearings, and a $5 million cash bail was suggested for Brooks – who the court heard was insolvent.

He said that Brooks had a long history of not following ‘your societal norms’, and said the bail was warranted. 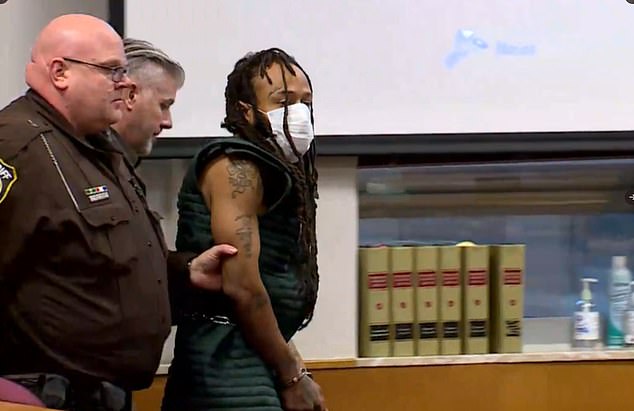 Darrell Brooks, 39, is ushered into court in Wisconsin on Tuesday for his bail hearing 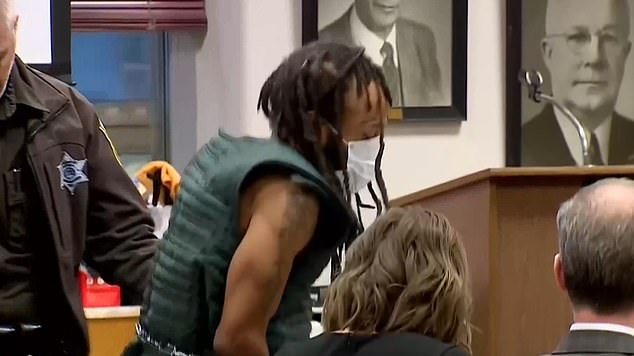 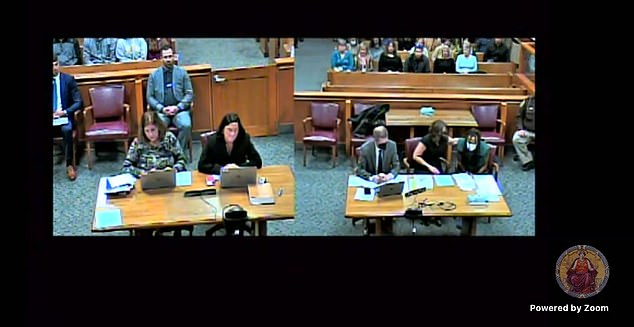 Brooks is seen sitting to the right of the courtroom, wearing a green vest 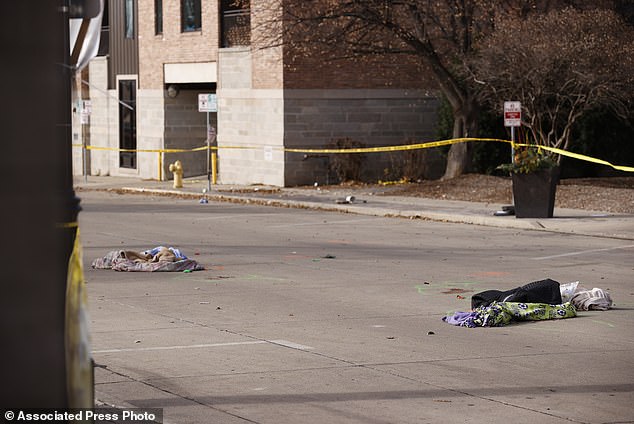 Items lie in the middle of a street in Waukesha, Wisconsin, on Monday, where investigations continue after a vehicle slammed into a holiday parade the day before, killing several people and injuring multiple others

Brooks has officially been charged with five counts of first-degree intentional homicide, according to the Waukesha County District Attorney’s Office.

But during his court hearing on Tuesday, prosecutors said a sixth victim, a child, has also died.

Prosecutors said they will consider a sixth homicide charge due to the child’s death.

Brooks’s hearing came as friends and families of the 60 people, including many children, hit by an SUV that sped through a Christmas parade in a suburban Milwaukee downtown say they suffered life-threatening injuries, with some clinging to life. 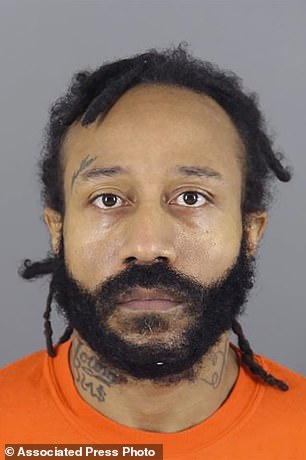 Five dancers who were injured during the incident remain in the ICU, according to a statement by the Waukesha Xtreme Dance Team.

‘Our dancers have a multitude of serious physical injuries, of those, five dancers are currently in the ICU,’ read the statement posted to the dance team’s Facebook page.

A young girl who is a member of a dance troupe struck by the SUV, a moment captured on cellphone video, woke up Monday and told doctors, ‘just glue me back together,’ according to her GoFundMe fundraising page organized by a family friend.

‘No child or parent should have to endure this amount pain and suffering,’ the girl’s mother, Amber Konhke, posted Tuesday afternoon.

The fundraising pleas detail the extent of some of the injuries from the incident that has left five dead so far and 48 hurt.

Konhke’s daughter Jessalyn is shown smiling directly at the camera on one GoFundMe page, wearing a white Santa hat and holding matching pompoms.

She is standing alongside other girls on the Waukesha Xtreme Dance team in a picture taken moments before she was struck.

Jessalyn is ‘fighting for her life,’ according to the fundraising account established by family friend Oscar Luna.

She lost a kidney, broke her pelvis and has damage to her liver and lungs, Luna said. 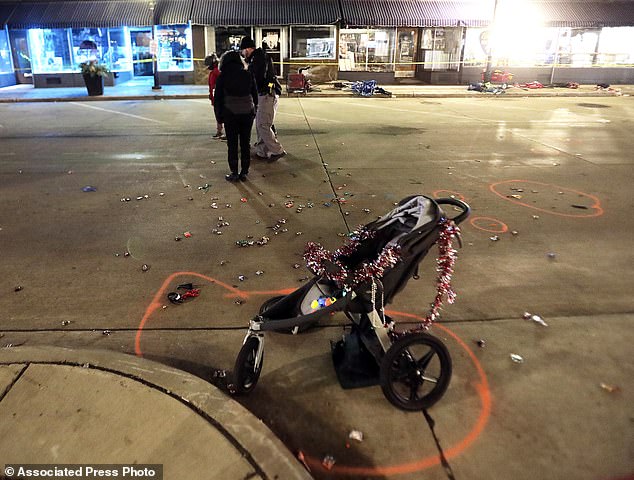 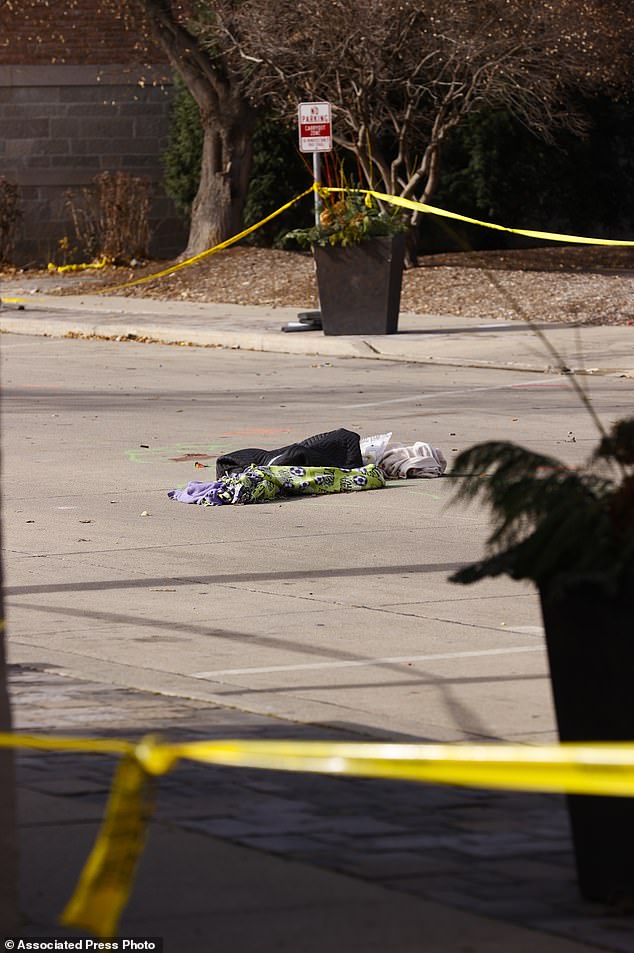 Police tape blocks off a street in Waukesha, Wisconsin on Monday

‘This holiday season will be a brutal one for them,’ he said of their family.

In an update posted Tuesday morning, Luna wrote that she had woken up briefly Monday.

‘She is not fully aware of the severity of her injuries but managed to say, `just glue me back together,´’ he wrote.

‘Only a child could reference themselves as a little doll in this situation.’

Julia, who was also marching with her dance team and whose last name also isn’t given, ‘is in the fight for her life,’ suffering from brain trauma after being hit, her fundraising page established by family friend Jen McCarthy says.

‘Everyone that knows this little girl knows what joy she brings to the world,’ the post says. ‘She has a heart of gold, a smile that can light up the room and is loved by so many.’

Brothers Tucker and Jackson Sparks were among three sets of siblings hospitalized after being struck by the SUV, and they remain at Children’s Hospital of Wisconsin, according to an online fundraiser organized by a cousin.

Tucker, 12, has head injuries but is recovering, and Jackson, 8, suffered a more serious brain injury and ‘needs a miracle,’ according to Alyssa Albro, the niece of the boys´ parents, Aaron and Sheri Sparks.

She said the boys’ parents are at their bedsides.

Aidan Laughrin, a senior at Waukesha South High School, was hit while performing with the marching band, suffering fractured ribs, according to an online fundraiser.

The family is ‘tough but the road ahead is going to be tough too, both physically and emotionally,’ the organizer posted.

Another band member, saxophonist Tyler Pudleiner, also was struck and has undergone two surgeries since Sunday.

‘He has a long road to recovery,’ wrote Joane Chmiel, one of two people raising money to help Pudleiner.

Tamara Rosentreter was doing what she loved, entertaining the crowd as part of the Milwaukee Dancing Grannies, when she was struck by the SUV that took the lives of three of her fellow dancers.

The mother of four and grandmother of one was the leader of the troupe, according to an online fundraiser seeking help for Rosenstreter’s recovery.

The organizer posted a message from Rosenstreter, who said ‘I’m still here. Lots of pain, stitches, broken bones and lots of bumps and bruises. Love you ALL.’

She described how a woman prayed for her at the scene ‘to help give me peace and comfort’ and how another kept her warm with a blanket.

Lucero Isabel Perales says several family members were a part of the parade and were struck by the SUV.

That includes a cousin with skull fractures who is in a coma, an uncle who underwent six hours of surgery for a broken leg and another cousin with bruises all over her body.

‘This is a very hard time for all of us, it was something so unexpected,’ Isabel Perales wrote.

More than $787,000 had been raised by Tuesday afternoon for the 18 GoFundMe-verified pages for parade victims.

The Waukesha County Community Foundation said that fund had grown to more than $916,000 by Tuesday afternoon.

‘There’s so much outpouring of support,’ Reilly said.

‘It warms your heart to know that people are saying, ‘We support your community, we feel for you.”