London: The British public would have access to a coronavirus vaccine before Australians, comments from the UK Health Secretary suggest.

Prime Minister Scott Morrison said on Monday that under agreements his government had struck, Australians could have 3.8 million doses of the Oxford University/AstraZeneca vaccine by January or February next year. The first doses would be imported but the rest of 84.8 million shots for Australia and its regional neighbours would be produced in Melbourne.

However, when that claim was put to the British Health Secretary on London talkback radio hours later, Matt Hancock maintained the UK would be ahead of Australia. 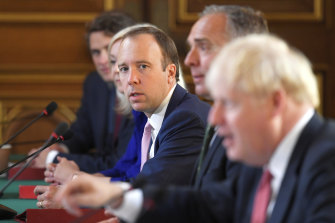 "We're ahead of them," Hancock told LBC host Nick Ferrari.

"The best-case scenario is that that happens this year, I think more likely is the earliest part of next year, in the first months of next year is the most likely."

Hancock said AstraZeneca, a British company, had already begun producing some of the 30 million doses the British government has on order. 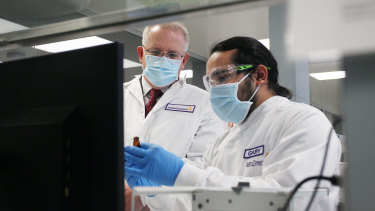 The vaccine is being developed by the Oxford Vaccine Group and is in phase three trials. Under phase one and two trials, it produced a strong immune response in the body's T-cells as well as neutralising antibodies.

Australia is spending up to $1.7 billion on producing the vaccine as well as another being developed by the University of Queensland which would be manufactured by CSL.

Hancock's hopes for a vaccine within the year were measured by a stern warning to young people, especially affluent 17 to 21-year-olds whom he said were the source of a big rise in coronavirus cases in Britain.

UK cases dipped in July, rose slightly in August but have jumped sharply since the beginning of September with almost 3000 new cases recorded on Sunday and on Monday – the highest one-day number of cases since May 22.

However, the increases have not led to a correlating jump in the death rate or hospitalisations.

Britain's daily death rate has stayed stable and below 20 since July 21 and was three on Monday, well below the April 8 peak of 1072.

The number of people in hospital has also steadily declined since its peak of 19,872 in mid-April, with 124 new patients admitted on Sunday.

But Hancock said that just because younger people were less likely to die from the virus, it did not mean that they were still not a risk to the broader society.

"They can fall very, very ill and secondly, inevitably it leads to older people catching it from them," he said.

He pointed to rises in cases in France and Spain which led to a three and 14-fold rise in hospitalisations in the countries respectively.

Hancock said the UK was working on measures to reduce from 14 the number of quarantine days travellers from countries with higher rates of infection would have to undergo.

But he ruled out cancelling quarantine for those who tested negative at the border, saying tests on arrival did not pick up people who had the virus incubating.

Our weekly newsletter will deliver expert analysis of the race to the White House from our US correspondent Matthew Knott. Sign up now for the Herald‘s newsletter here, The Age‘s here, Brisbane Times‘ here and WAtoday‘s here.