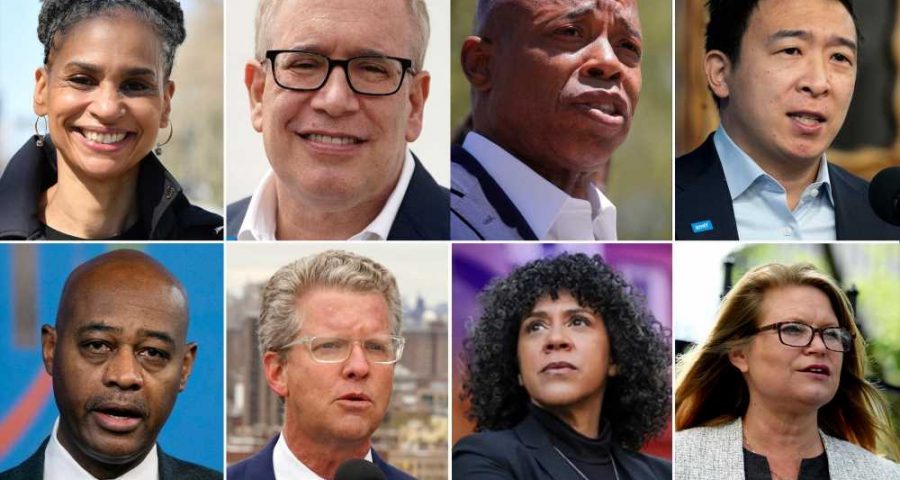 New Yorkers will get their first chance to watch a live televised debate Thursday night among eight Democratic mayoral contenders for the June 22 primary as the city struggles to climb out of a devastating pandemic and confronts increasing crime and violence.

Spectrum News NY1 will host the showdown starting at 7 p.m., which will also be streamed online.

The candidates will be appearing virtually.

It’s the first of three televised debates planned by the Campaign Finance Board.

The two frontrunners — entrepreneur Andrew Yang and Brooklyn Borough President Eric Adams — are expected to draw the most attention. Yang has dominated polls including the most recent one, released Wednesday, that put the former presidential contender at 21 percent, ahead of Adams’ 17 percent.

A previous poll had Adams pushing past Yang for the first time.

The latest survey by Schoen Cooperman Research saw Scott Stringer slipping with just 10 percent of respondents picking him as their first choice. It’s the first poll to have been taken afterthe city comptroller was accused of sexual harassment by a former associate. He has denied the allegations.

The Schoen poll, paid for by the civic group New Yorkers for a Better Future, is the only one to rank respondents choices for mayor.

The primary will be the first citywide election to use the new ranked-choice voting system. That means New Yorkers will be able to select their preference of up to five candidates running for mayor and other offices — and the ballots will be tallied by first, second, third, fourth and fifth choice, eliminating the need for runoff elections.

The survey showed a Yang victory in a ranked-choice face-off with 53 percent. Adams’ won 47 percent, but the Brooklyn borough president and former cop was respondents’ favorite second-choice candidate.

“Unlike this Saturday’s Preakness, the horses in tonight’s NYC mayoral debate may very well be running hard to place, not win,” longtime political veteran and attorney Sid Davidoff told The Post.

“Because with ranked-choice voting, the candidate who gets the most second-place votes, might very well end up being the mayor,” Davidoff said.

The candidates will meet less than a week after a shooting in Times Square that injured three bystanders including a 4-year-old girl. Gun violence has increased by 83 percent compared to last year.

Mayor Bill de Blasio is term-limited. His successor will face the daunting task of rebuilding The Big Apple from the devastation wrought by the coronavirus pandemic that’s killed nearly 33,000 residents, shuttered businesses across the five boroughs and left about 13 percent of people unemployed.

De Blasio, who has not endorsed in the race, said he’d be watching the debate closely.

“I think it’s an important moment. I think it’s obviously time for New Yorkers to start focusing more intently. This is the kind of thing that is going to give people a lot more information,” de Blasio said at his daily press briefing.

The debate between the two Republican candidates, Guardian Angel founder Curtis Sliwa and restauranteur Fernando Mateo, is scheduled for May 26.