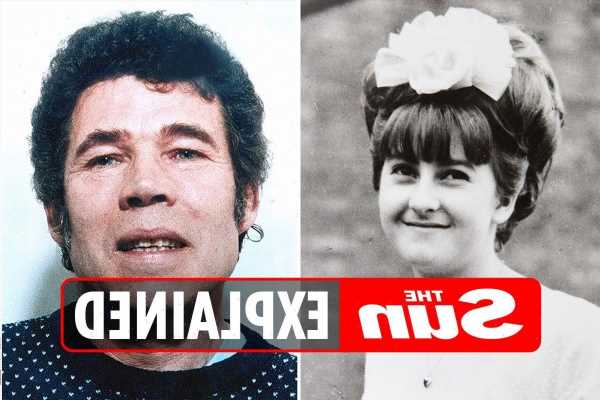 COPS have swooped on a Gloucester cafe in hope of unearthing the remains of teen Mary Bastholm – missing for over 50 years.

Bastholm went missing from a bus stop in Gloucester in 1968 and worked in a cafe where Fred West had done some building work. 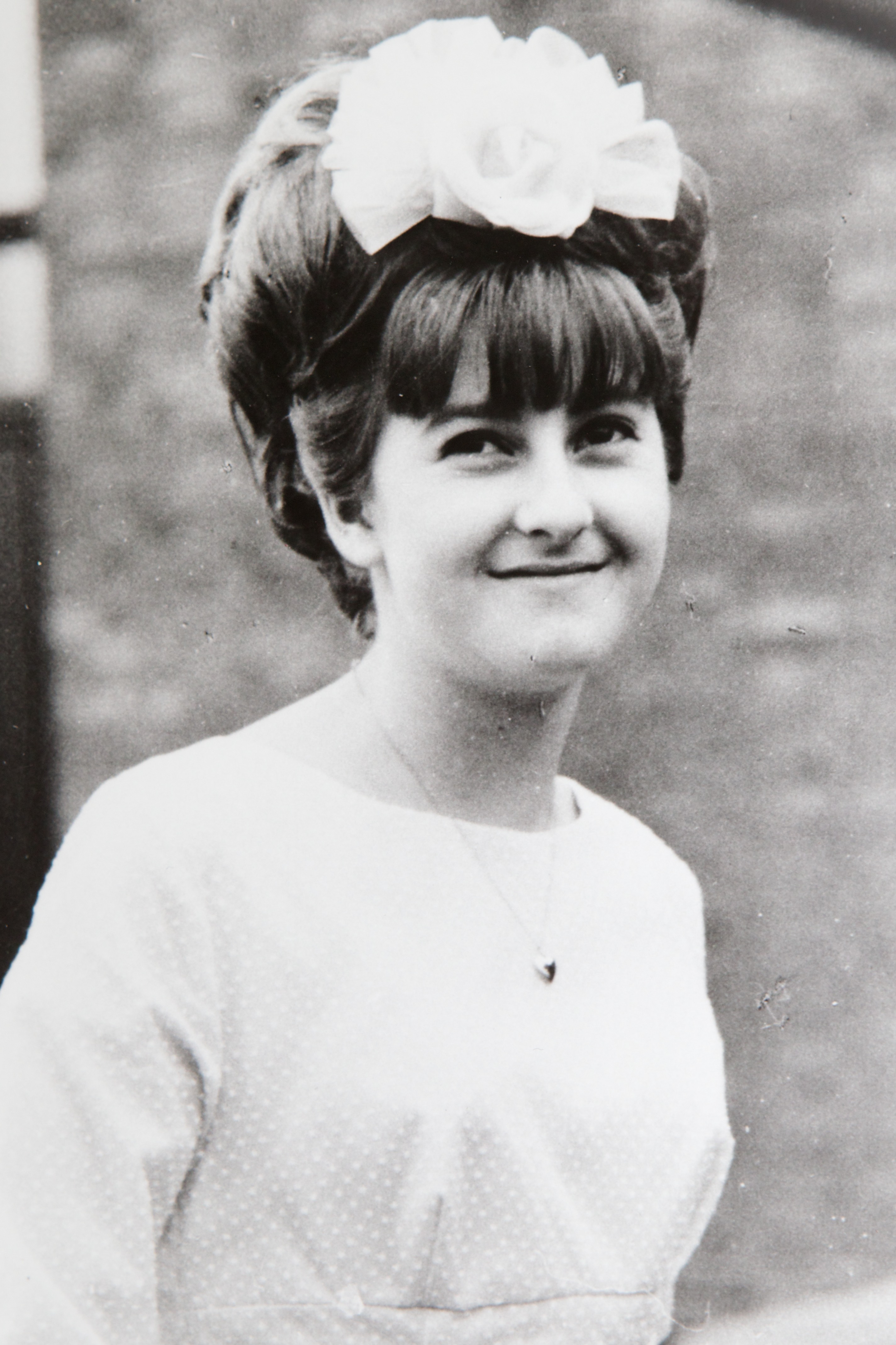 Mary Bastholm was a schoolgirl who mysteriously went missing at the age of 15 more than five decades ago, in 1968.

Tragically for her family and friends, the teen's body has never been found, with her parents passing away before discovering what happened to their daughter.

At the time of her disappearance, Mary had been working as a waitress at the Pop-In café in Gloucester – now called the Clean Plate café. 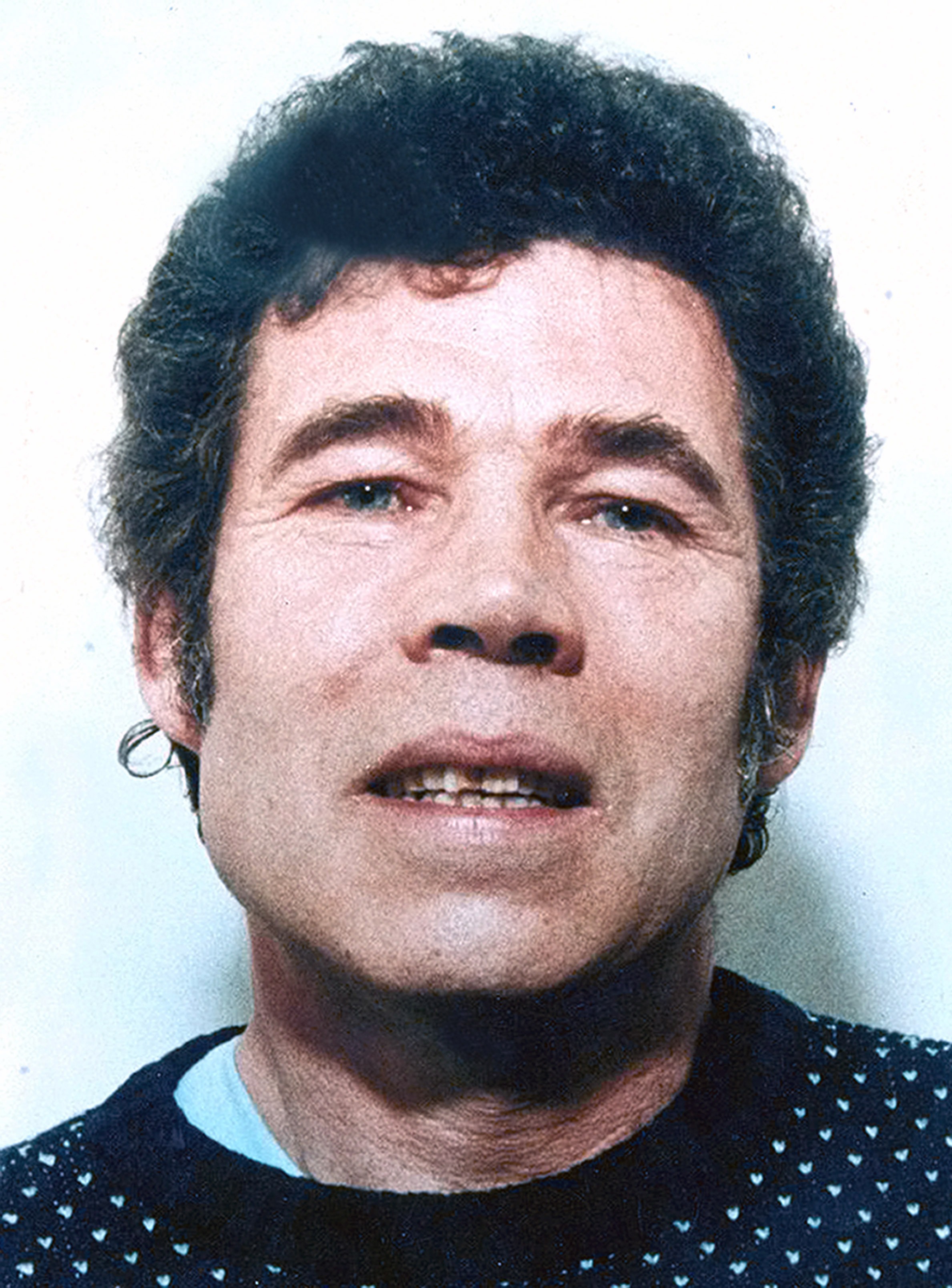 What happened to Mary Bastholm?

Mary was just 15 years old when she was reported missing on January 6, 1968, and she has never been seen or found ever since then.

She is believed to have been offered a lift by serial killer Fred West and then murdered.

Her mysterious disappearance had been linked to the serial killer as he was a regular customer at the cafe – then known as the Pop-In – when Mary vanished in Gloucester.

In 1970, Mary's mum and dad, Doreen and Christian Bastholm, spoke about the last time they saw their daughter, alongside her boyfriend, Tim Merrett, who had been expecting to meet her off the bus in Hardwicke, a village just outside Gloucester.

Asked to recall the last time they'd seen their daughter, Doreen told ATV's Alan Jones: "Well, she came home about half past six, and had her tea, and sat in this corner, where I'm sitting and enjoyed the Bernie Winter [comedy TV] show.

"She went out about between 10 and quarter past seven with a carrier bag with a Monopoly set in to catch the 25 past bus at the end of Tuffley Avenue.
"And that was the last we saw of her." 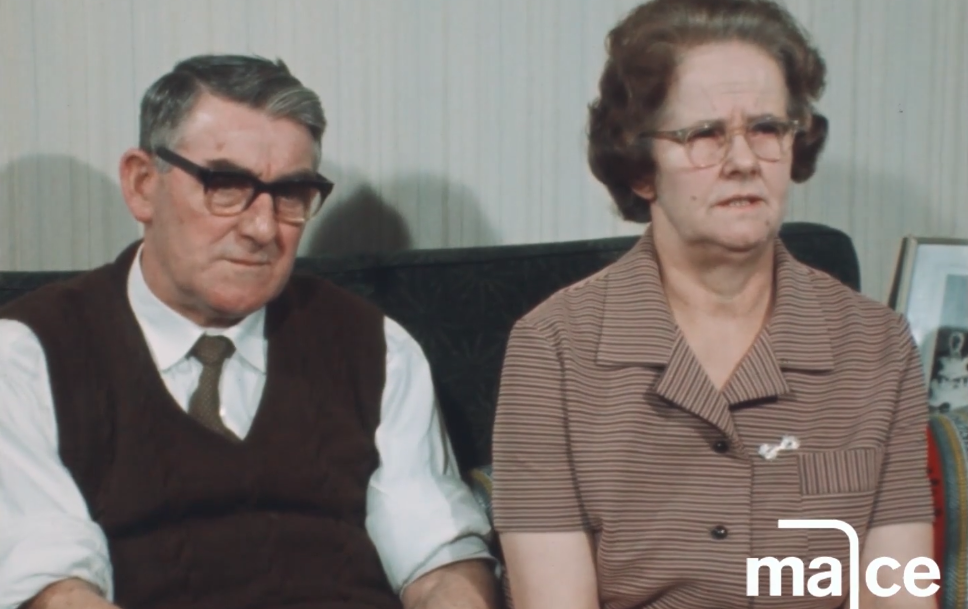 Her boyfriend added that when he went out to meet her, the 7.30pm bus "came along and she wasn't on that".

Eventually he went home, and returned to the bus stop at about 8.20pm, for the 8.30pm bus. He first suspected something was wrong when she wasn't on that bus either.

When her parents were asked what they thought happened on that night, her dad replied: "Well it's rather difficult to say, but one thing – I'll always say this – she didn't go away on her own."

He said it was unlikely that a "young girl like that" could "evade the police for so long, well she'd have to be a master at the game, wouldn't she?"

Christian added: "Well personally myself, I think she took a lift from someone she knew. This could have been someone that perhaps came into the cafe."

A woman worker in the cafe told the reporter: "Well, [Mary] was very happy, her boyfriend had come in the daytime and she'd arranged to go to his house and she was perfectly happy."

"I can't imagine that she would have run away." 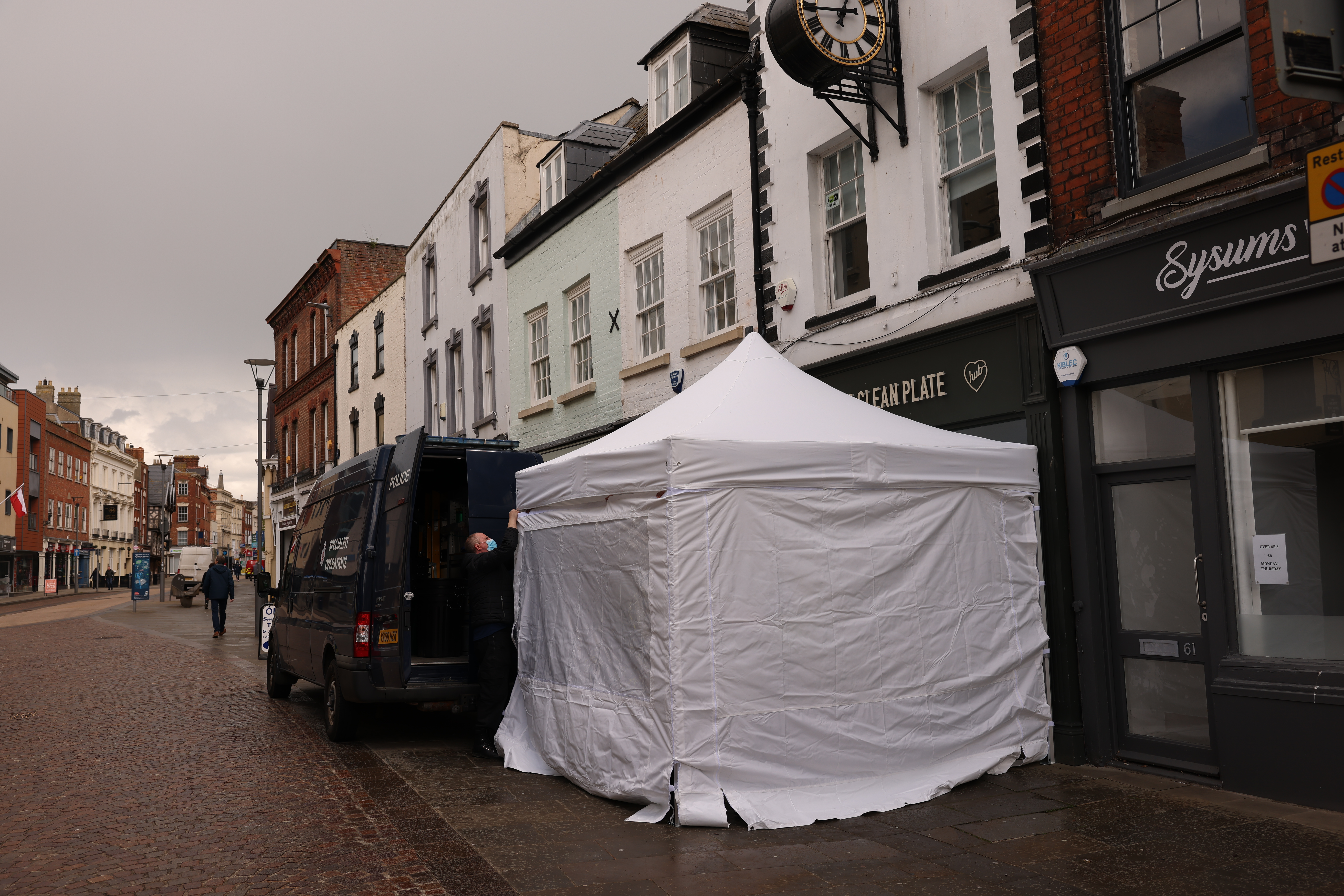 Police said that they knew she had arrived at the bus stop, "but from then on we have no trace of her whatsoever".

Her mum said: "Her bank book was left upstairs with some loose money in it.

"The only thing she had in her handbag was her medical card, and an appointment card for the infirmary to see the dentist which she had to go and see on the following Thursday."

Asked if they had any messages for their missing daughter, Doreen pleaded: "Please come home or get in contact with us".

Her husband added: "I think she'd immediately do it.

"She was a very emotional girl. I don't think she would have kept us [waiting] this long.

"Even if she had run away by herself or with someone else, I think if she had the opportunity she would have communicated with us." 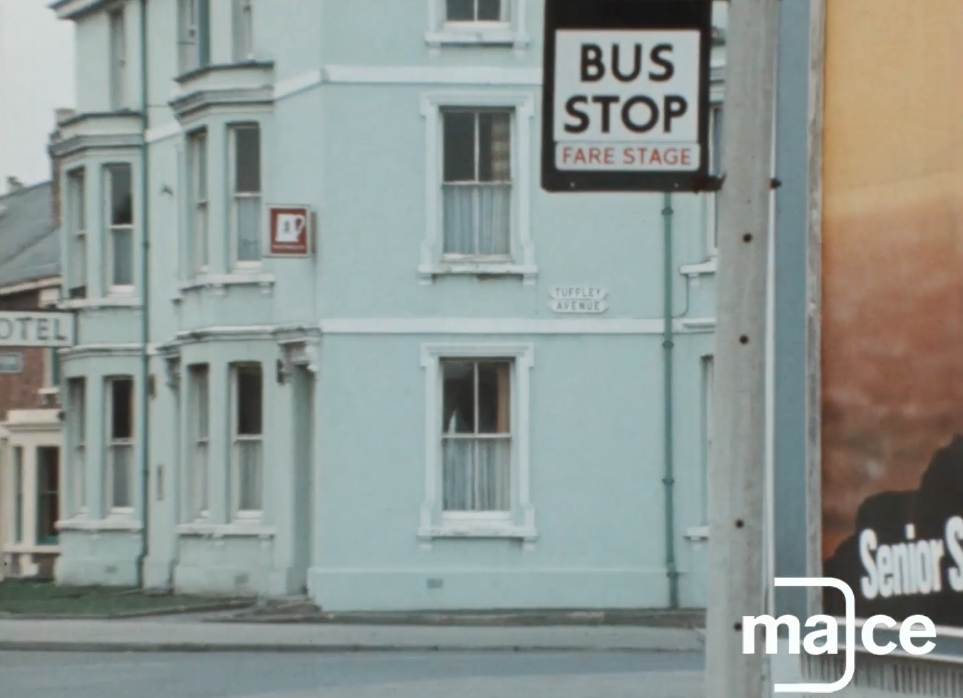 When was she allegedly murdered by Fred West?

With Mary Bastholm last seen on the night of January 6 1968, it's assumed that she was killed on or around that day.

Cops believe Mary was abducted and killed by Fred West – but they couldn't prove that theory without a body.

An online petition was launched by Chris Roberts nearly a decade ago, in 2012, to urge police to find her, and enable her friends and family to lay her to rest.

It said that the cops should search for her remains in the cafe where she had worked as Mary was "widely regarded as another victim of Fred West".

The petition adds: "Fred West was a regular customer of the cafe and knew Mary. Mary was seen in West's car on more than one occasion.

"West admitted to his son Stephen and to Janet Leach that he had killed Mary.

"West did the basement toilet conversion at the cafe around the time of Mary's disappearance -a major part of this conversion was the laying of a concrete floor.

"West's known 'modus operendi' was to bury his victims.

"At the time of Wests' arrest in 1994, the then tenant of the cafe reported to the police that he had found a school exercise book belonging to Mary secreted behind some brickwork in the toilet area.

"This book was collected by the police but the Bastholm family were not informed of its discovery."

In a more recent update, the petition said the Gloucester Police had responded: “We are not aware of any new evidence in relation to this case that has not already been investigated. 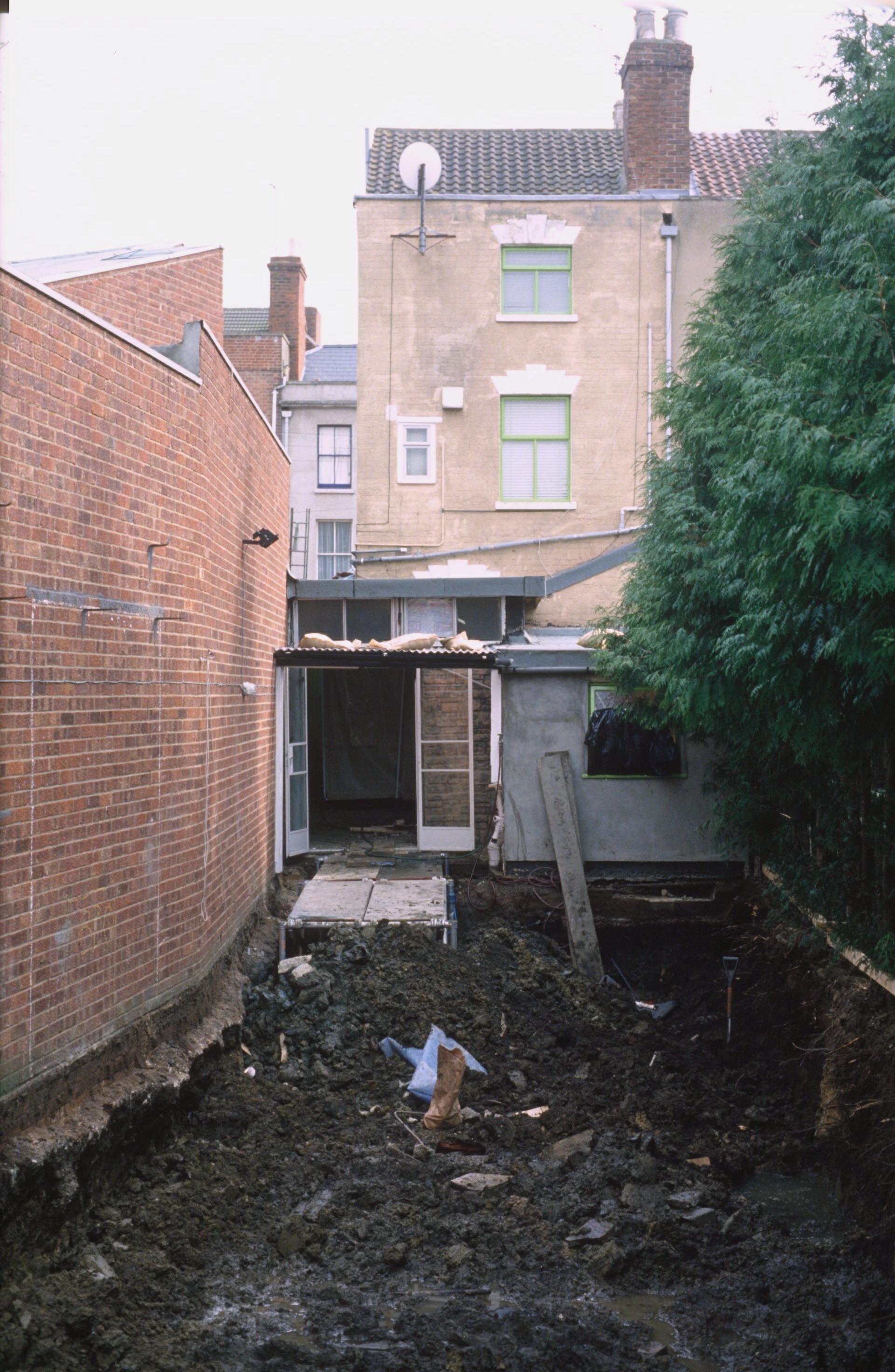 "However, should any fresh evidence come to light we would welcome the opportunity of reviewing it and taking appropriate action.

"The inquiry into the disappearance of Mary Bastholm is, like every other investigation of its nature, still open and we would still be very keen to bring closure to her family and the community.”

But, the cold case has now been thrust back into the spotlight, with the revelation that an investigation will take place "for a number of weeks following a recent discovery", says the force.

In a press release on May 11, 2021, Gloucester Police said: "On Friday 7 May officers were called to a cafe in Southgate Street by a production company filming a documentary.

"They reported how they had found possible evidence to suggest a body could be buried within the property.

"Detectives attended and the Major Crime Investigation Team has deemed that further assessments are required in order to determine whether an excavation is necessary.

"In the past, people have linked the building to the disappearance of Mary Bastholm." 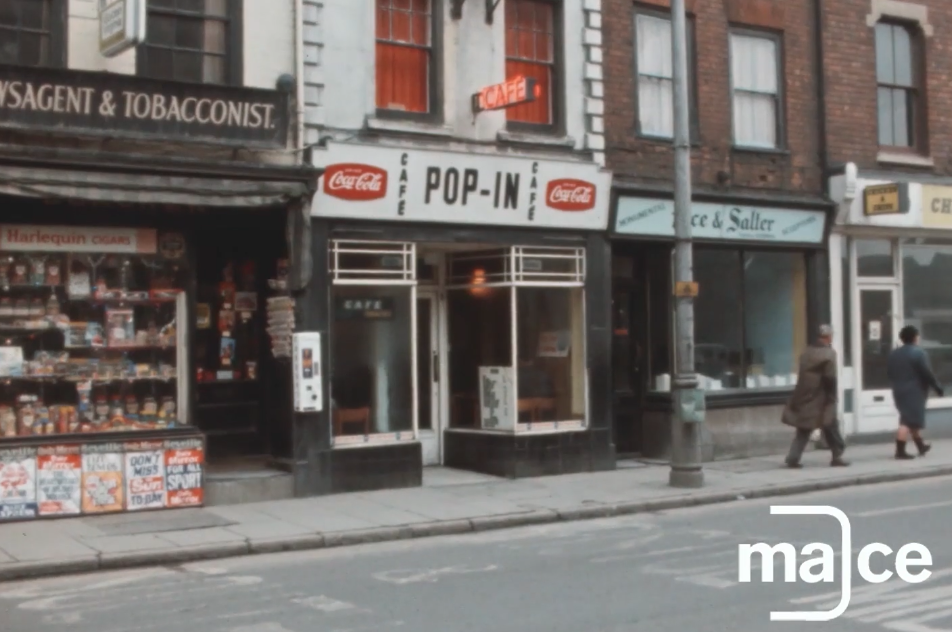 The Sun Online reported that West, a builder, was said to have laid a concrete floor in the basement of the eatery a month before Mary went missing.

Before killing himself, West reportedly confessed to murdering Mary to son Stephen and Janet Leach, a social worker who acted as West’s ‘appropriate adult’ during police questioning.

Family friends of Mary have campaigned in vain for years for police to search the cafe for her remains.

But a cadaver dog was recently taken to the site by a TV documentary team and is said to have shown a positive reaction in the basement.

In addition, ground penetrating radar is said to have shown up a suspicious image below the concrete surface.

The TV team contacted Gloucestershire Police with their findings and a full search of the basement area under the guidance of an archaeologist was launched on May 11, 2021. 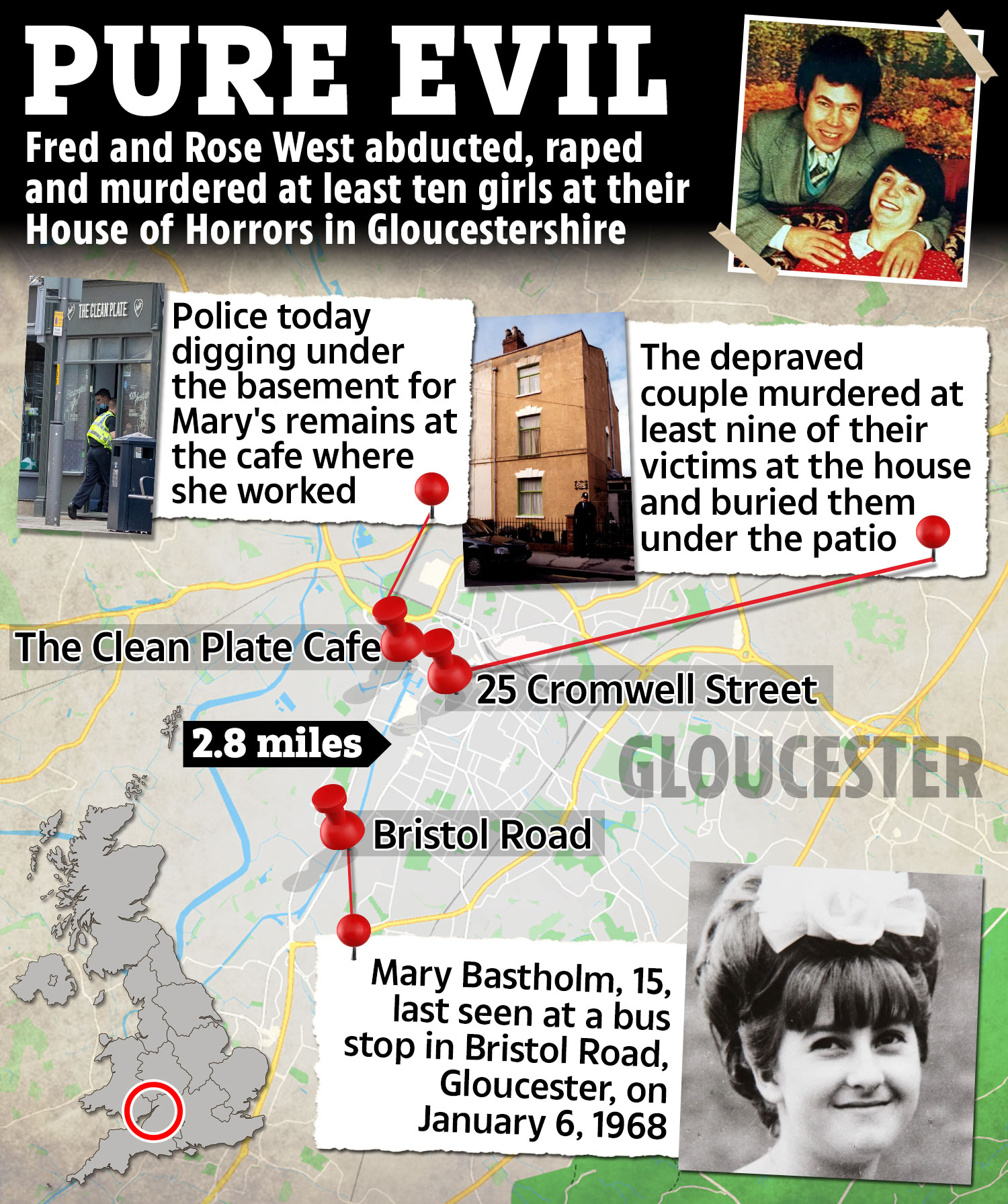 The last life Fred West took was his own, denying his victims’ families the right to see him brought to justice as one of the worst serial killers in British history.

So it's not known whether his wife, Rose West, helped him abduct Mary Bastholm.

With the help of Rose, Fred murdered at least 12 young women – most were raped, tortured and mutilated before being killed.

The evil couple would then bury their victims’ remains in the cellar or their house of horrors at 25 Cromwell Street in Gloucester. 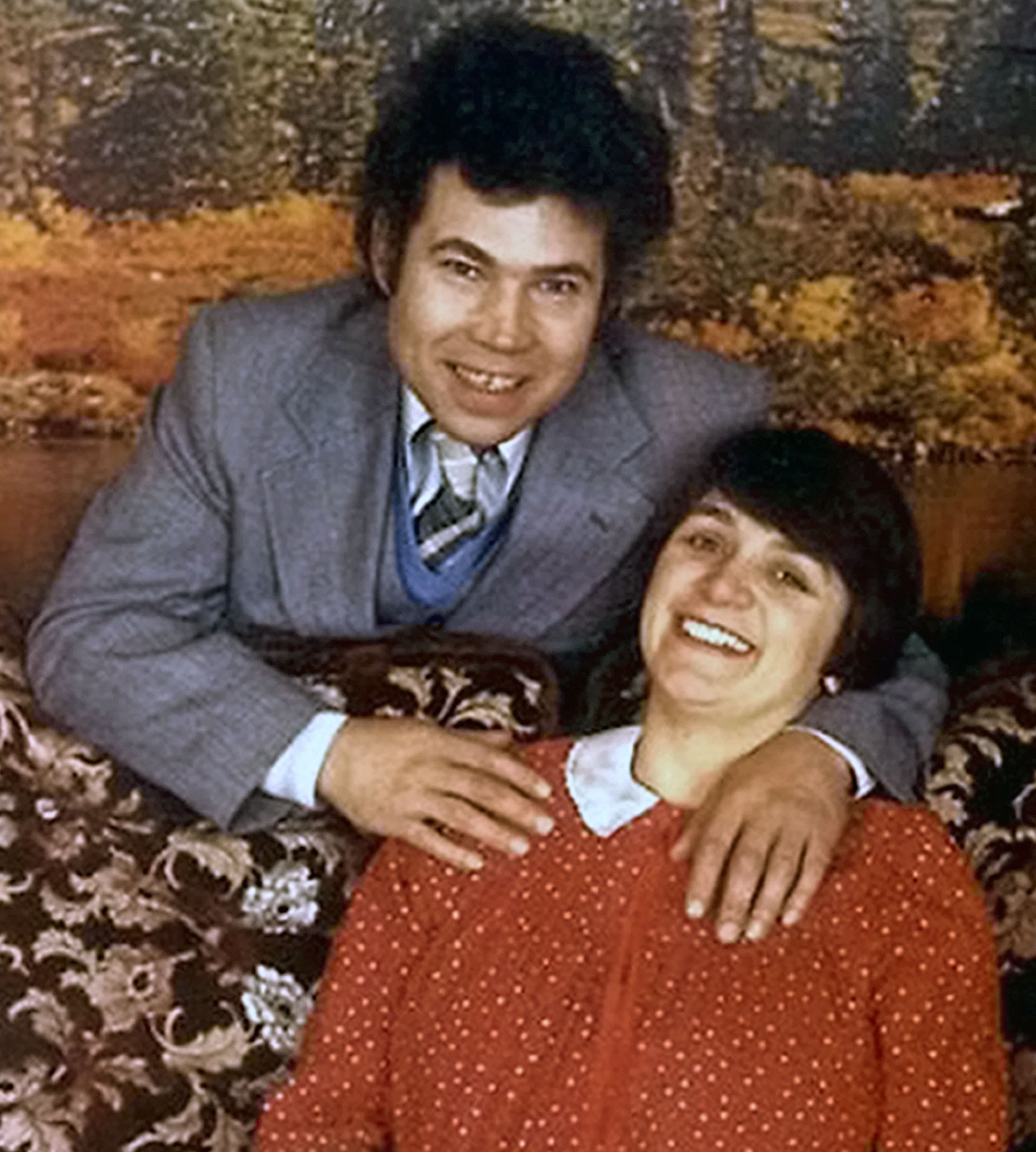 In 2014, the Mirror reported that Mary's brother, Peter Bastholm, had urged serial killer Rose West to tell him what happened to his sister.

Peter, then aged 69, told Sky News: "I think Rose knows exactly what happened to Mary because I assume she and Fred discussed it between themselves.

"Whether she will ever disclose it, I really don't know.

"It would be a final act to find Mary's body and lay it to rest after all these years, after all we have gone through."

When the cops recovered the remains of the Wests' murder victims during the excavation of 25 Cromwell Street in Gloucester, a silver locket on a chain, which the family believes belonged to Mary, was found by police.

Peter added: "My wife and I went down to the police station to view a lot of things that had been taken from the Wests' house.

"My wife picked out a silver locket on a chain and she said that was Mary's because she wore it as a bridesmaid at our wedding.

"We had a photo of it and police took it away to examine.

"But because it was a black and white picture they said they could not tell if the locket was silver or gold, so nothing came of it, but it was exactly like the one found at Cromwell Street."