‘She can’t govern, and nor can her divided and disintegrating party’: Without a single warm word for his rival Labour leader Corbyn calls for an IMMEDIATE general election after devastated May throws in the towel

The Labour Leader refused to pay any tribute to the outgoing Tory leader and instead demanded that her replacement call an immediate general election.

MPs on all sides have praised the ‘dignity’ of Mrs May’s Downing Street resignation while questioning her record as PM, but Mr Corbyn chose to ignore her tears and regret.

Critics pointed out that even the Prime Minister’s Brexit foe Nigel Farage admitted today: ‘It is difficult not to feel for Mrs May’. 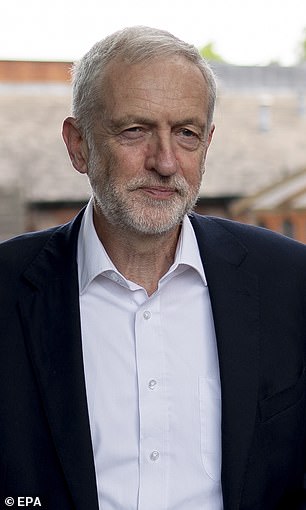 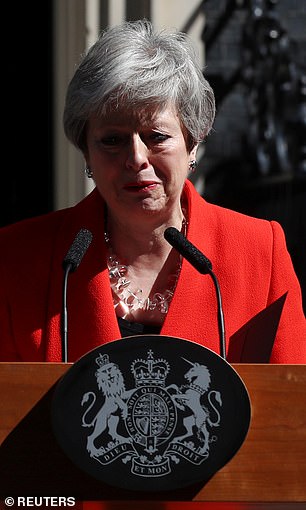 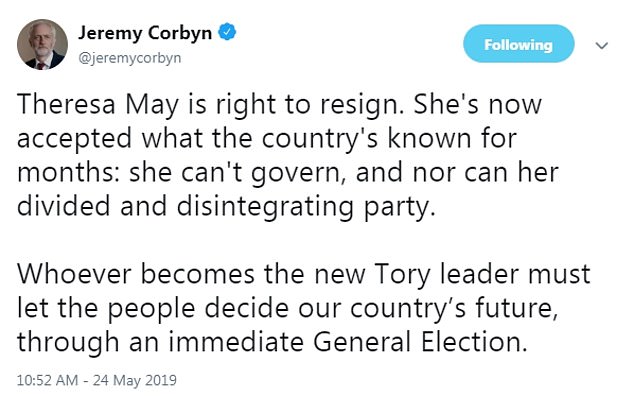 His statement ignored her heartfelt speech and said: ‘She can’t govern, and nor can her divided and disintegrating party’ 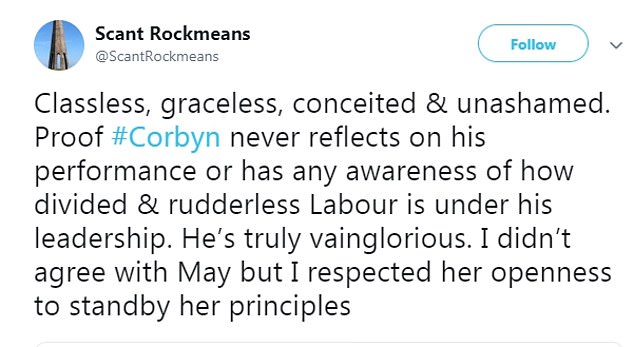 Mr Corbyn was called ‘classless’ and unstatesmanlike today by the public

Mr Corbyn said: ‘She has now accepted what the country has known for months: she cannot govern, and nor can her divided and disintegrating party.

‘The burning injustices she promised to tackle three years ago are even starker today.

‘The Conservative Party has utterly failed the country over Brexit and is unable to improve people’s lives or deal with their most pressing needs.

‘Parliament is deadlocked and the Conservatives offer no solutions to the other major challenges facing our country.’

Some of Mr Corbyn’s critics were upset by his statement.

One said: ‘Classless, graceless, conceited and unashamed. Proof Corbyn never reflects on his performance or has any awareness of how divided and rudderless Labour is under his leadership. He’s truly vainglorious. I didn’t agree with May but I respected her openness to standby her principles’.

Another wrote: ‘Corbyn’s classless statement shows once again how rubbish a statesman he’d be’.

Other Labour MPs chose to take a more conciliatory tone.

Mr Corbyn’s deputy Tom Watson said that Mrs May ‘had an unenviably difficult job, and she did it badly.’ But even he added, ‘she tried to do what was right for our country,’ and was ‘honorable in her intentions.’

In contrast Labour MP Jess Phillips tweeted: ‘It’s hard to hear her emotion. She deserves our respect’ before criticising her record.

Before she quit Mrs May urged MPs on all sides to back the deal that would end her premiership.

Labour briefly offered Mrs May a lifeline, with a spokesman for Jeremy Corbyn refusing six times to rule out the party abstaining on the legislation.

But within two hours, party sources were warning Labour was likely to vote against the measure unless Mrs May agrees to accept the party’s demands on issues like a customs union.

It came after Brexit Party leader Nigel Farage had cast his vote in the European elections with a snipe at Mr Corbyn by saying: ‘Labour are in so much trouble here, you can’t believe it’.

During a visit to Worthing, West Sussex, on Thursday the Labour leader told a group of candidates: ‘Get ready for a general election. We will sort things out.

‘Under a Labour Government, Britain would be a very, very different place.’

Joking with the group, he added: ‘The Tories; I can’t say I feel very sorry for them but I’m trying. I’m an incredibly generous person.’