Blushrooms! Wooden fungi carved from tree trunks are axed from public park because they ‘look like penises’

A series of wooden mushroom sculptures carved into tree trunks have been removed from a Welsh park after people complained the ornaments looked like penises.

Dozens of tree stumps were carved into mushroom shapes by gardeners as they cleared woods in Swansea’s Cwmdonkin Park.

But passers-by say the fungi looks more like fun guys – in the shape of erections.

Officials ordered many of the carvings nearest the footpaths to be axed following complaints about their suggestive appearance.

There were also reports of incidents where teenagers were seen posing for selfie pictures astride the sculptures in lewd poses before posting snaps on social media. 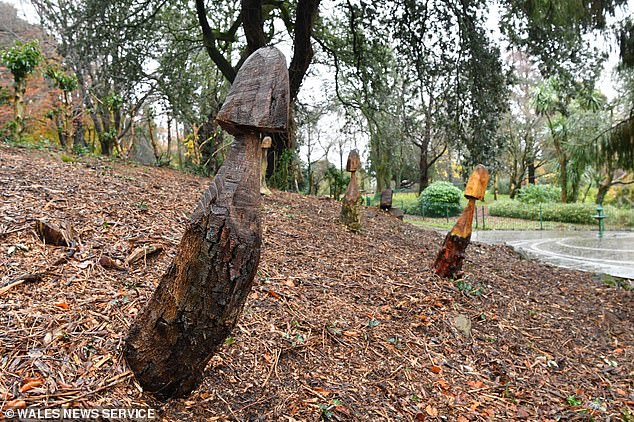 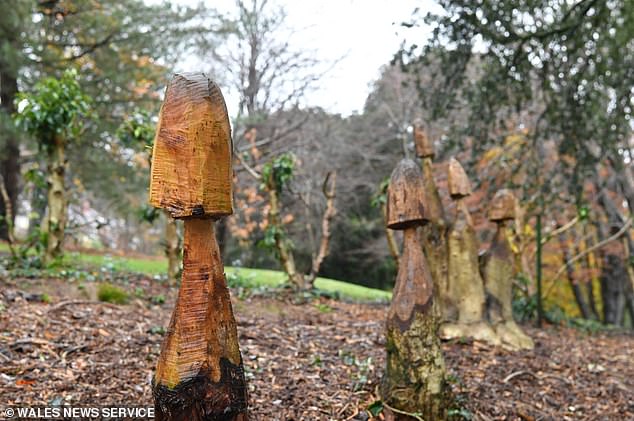 The removal of some of the sculptures has sparked a bitter row that has ‘divided the community’.

Some have criticised the scultpures for their lewd allusions, while other people have said they ‘need to grow up’.

One person said they were ‘offended by their offence’ while another called their removal a ‘travesty of justice’.

Uplands councillor Peter May said: ‘The council’s parks department has responded to complaints received about the mushroom carvings.

‘But I think clearly, this is an issue that has divided the community.

‘I haven’t received any complaints myself – the first I knew was when they were removed.’

The mushroom carvings have been in place for at least a year – but only recently complaints were raised after ‘anti-social behaviour’ in the park.

Cwmdonkin Park is famous for its association with hell-raiser poet Dylan Thomas, who used to play there as a child, and who featured it in his writing. 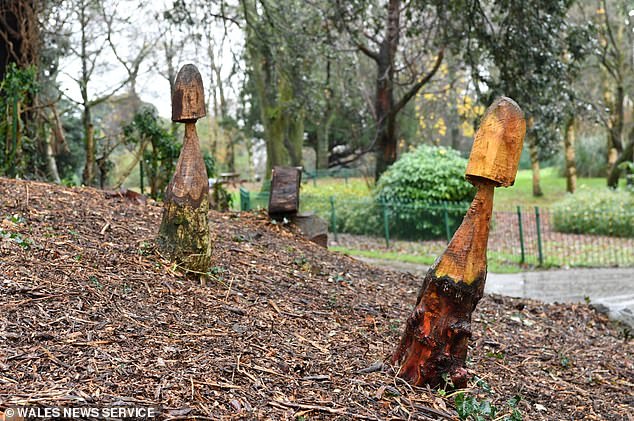 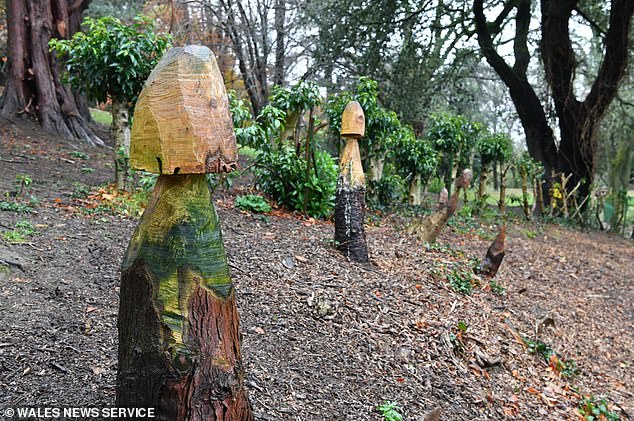 But fellow writer Paul Durden, co-writer of cult 90s Swansea film Twin Town, is furious at the axing – and wants to know who has complained.

Durden, who lives in nearby Uplands. said: ‘The one or two people who complained need to grow up.

‘It’s a travesty of justice. Surely you should always name the people who complain?’

Wading into the row, another person wrote on social media: ‘I’ve seen those carvings many times and not once did I think they looked offensive. I’m offended by their offense!’

Mike Anderson poked fun at the row adding: ‘Whatever person that decided to remove these must be a fungi.’

Mike Anderson poked fun at the row on his social media account, saying the person who removed them must be a ‘fungi’

Swansea Council responded to the complaints said they had no plans to remove any more of the mushrooms.

A spokesman said: ‘Our parks team has been completing some winter pruning of shrubs to help bring more sunlight to certain parts of the park, along with the removal of some dead trees.

‘Last winter we carved some of the tree stumps into mushrooms, creating an ornamental feature and these are still in place.

‘A recent complaint about some of the new carvings has led to them being removed. There are no plans to remove any more’.