Berlin: Germany is hosting a UN-led conference with world leaders in the hope of resolving Libya's years-long conflict, less than a week after similar talks in Moscow failed to yield significant progress.

The summit follows a flurry of diplomacy aimed at trying to get the leaders of Libya's warring factions – internationally recognised prime minister Fayez al- Serraj and rival commander Khalifa Haftar – to return to the table. It was not yet clear whether they would attend.

Russia has expressed hopes that the Berlin talks will cement a ceasefire already negotiated last weekend for the war-torn North African country. 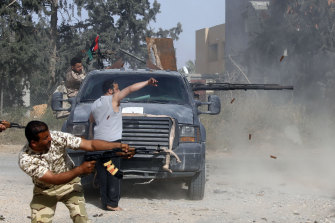 Libyan fighters loyal to the Government of National Accord (GNA) during clashes with forces loyal to strongman Khalifa Haftar south of Tripoli.Credit:AFP

"It is most important that the ceasefire is observed," Russian Foreign Minister Sergei Lavrov said on Friday.

Germany's focus, on the other hand, is on halting the flow of weapons and foreign fighters into Libya, which has been in turmoil ever since the 2011 overthrow of dictator Moammar Gadhafi.

"Our first point of contact in the Berlin process is the international parties to the Libya conflict. We want to encourage them to pull back," Maas wrote on Twitter on Friday.

Turkey, a supporter of al-Serraj, has allegedly sent hundreds of allied fighters from Syria to Libya in recent weeks, according to the Syrian Observatory for Human Rights.