A Perth teenager is fighting for life after an alleged victim of crime took matters into her own hands and pursued him in her vehicle on Monday, ending in a fiery crash.

Ronaldo Penny, 18, and his cousin, 17, were speeding down Hepburn Avenue in Hillarys on an allegedly stolen motorbike around 4.40am, one filming on their mobile as a Toyota Kluger followed close behind, at times on the wrong side of the road.

It’s alleged the driver of the car had just seen the motorbike stolen from her property.

WA Police said moments later the motorbike and car collided at a roundabout. The car flipped and burst into flames, and the two teens were flung from the motorbike onto the road.

Penny was rushed to hospital suffering bleeding on the brain, a fractured skull and significant leg injuries. He required emergency surgery and is in critical condition at Royal Perth Hospital.

His younger cousin and the 49-year-old female driver were also injured, with the woman able to crawl from the wreckage.

Major Crash detectives are investigating. No charges have been laid.

“When I saw him, it brought tears to my eyes,” she said. 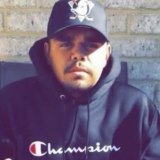 Ronaldo Penny is in a critical condition.

“My son’s life is not replaceable, but the motorbike is.”

Penny’s aunt, Joanna Ugle, said the call footage on one of the teen’s mobiles showed the pair vehicle driving behind the pair.

“[After the crash] that young boy [on the other end of the call] was crying thinking they were dead,” she said.

“Don’t take things in your own hands because people get hurt.

“My nephew is now in surgery, he has a fracture to his skull, he’s got bleeding on the brain, his whole leg is shattered, and the other young man … he had a broken collar bone.”

The incident comes after Kalgoorlie teenager Elijah Doughty, 14, was killed in 2017 after he was run over by a resident chasing him along a bush track while he was on a stolen scooter.

The tragedy led to riots in the town’s centre the following day after the 55-year-old driver was initially charged with manslaughter and not murder.

He was later convicted of the lesser charge of dangerous driving causing death and spent 19 months behind bars.